Home /
News /
Juneteenth marked across U.S. for 1st time as a federal holiday

Juneteenth marked across U.S. for 1st time as a federal holiday

Parades, picnics and lessons in history marked Juneteenth celebrations on Saturday in the United States, a day that carried even more significance after Congress and President Joe Biden created a federal holiday to commemorate the end of slavery.

A new national holiday was "really awesome. It's starting to recognize the African-American experience," said Detroit artist Hubert Massey, 63. "But we still have a long way to go."

In Detroit, which is 80 per cent Black, students from University Prep Art & Design High School dodged rain to repaint Massey's block-long message, "Power to the People," which was created last year on downtown Woodward Avenue.

The 'o' in "Power" was a red fist in memory of George Floyd and other victims of excessive force by police, Massey said.

"We did the original," said Olivia Jones, 15, leaning on a long paint roller. "It's important that we return and share that same energy." 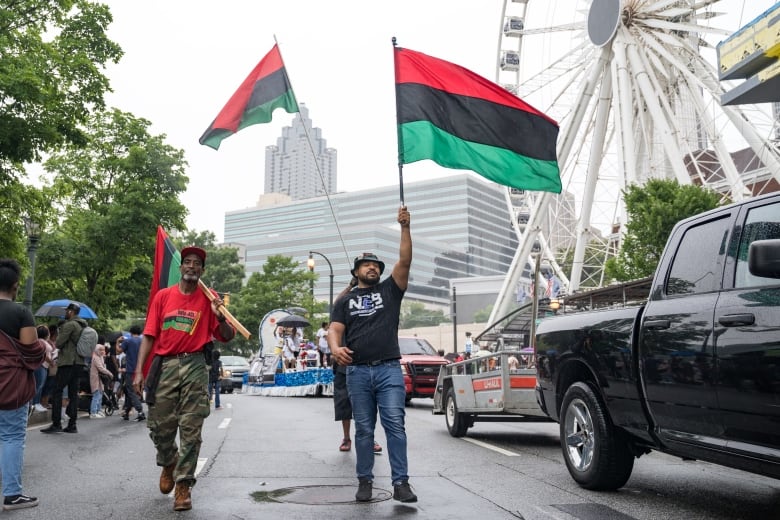 People participate in a parade to celebrate Juneteenth in Atlanta on Saturday. (Megan Varner/Getty Images)

Juneteenth commemorates June 19, 1865, when Union soldiers brought the news of freedom to enslaved Black people in Galveston, Texas — two months after the Confederacy surrendered in the Civil War and about 2 1/2 years after the Emancipation Proclamation freed slaves in Southern states.

Biden on Thursday signed a bill creating Juneteenth National Independence Day. Since June 19 fell on a Saturday this year, the U.S. government observed the holiday on Friday.

At least nine states have designated it in law as an official paid state holiday, all but one acting after Floyd, a Black man, was killed in Minneapolis by a police officer in May 2020.

U.S. President Joe Biden signs bill making June 19th a national holiday. Juneteenth marks the day in 1865 when legal enslavement of African Americans was abolished. But there are divisions over whether this goes far enough to heal racial conflict. 2:00

In Galveston, the birthplace of the holiday, celebrations included the dedication of a 5,000-square-foot mural titled "Absolute Equality."

Opal Lee, 94, who was at Biden's side when he signed the bill, returned to Fort Worth, Texas, to lead a 2.5-mile walk symbolizing the time it took for slaves in Texas to be told they'd been freed. 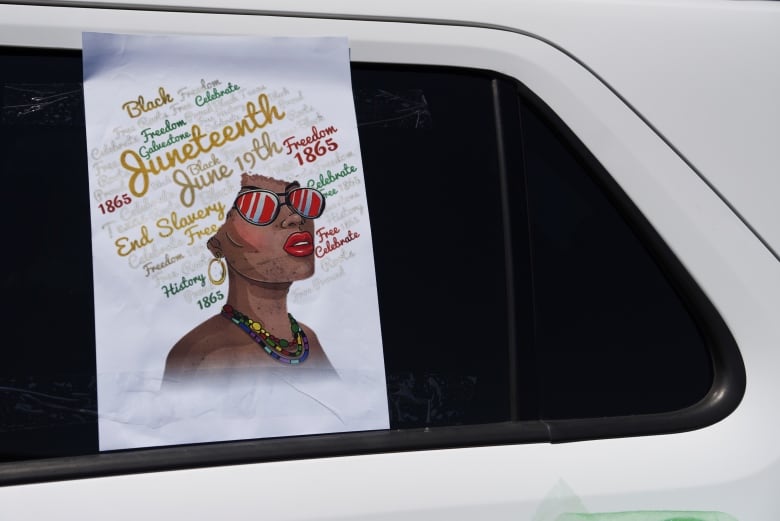 A poster is taped to a car ahead of a parade as people celebrate Juneteenth in Galveston, Texas, on Saturday. (Callaghan O'Hare/Reuters)

Officials in Bristol, R.I., unveiled a marker that describes the seaport's role in the slave trade. The marker was placed at the Linden Place Museum, a mansion built by Gen. George DeWolf, who was a slave trader. The Rhode Island Slave History Medallion organization raises public awareness about the state's role in slavery.

Food, live music, games and poetry readings were on the agenda at a park in Kansas City, Mo., at an event organized by Black Rainbow, a relatively new group advocating for oppressed people.

"Given the last year of trauma, brutality and grief that the Black community suffered on a daily basis, it is essential to our survival that we make moments for joy, for love and for celebrating our resilience," said co-founder Ryan Sorrell.

Hundreds of people gathered for a free concert in New York's Times Square organized by the Broadway League, the trade group for the Broadway entertainment industry. 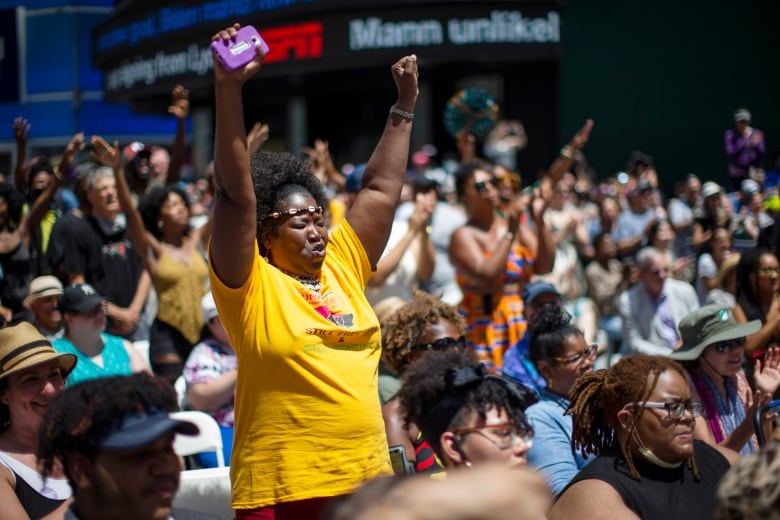 A Juneteenth parade was held in Evanston, Ill., a Chicago suburb that is using tax revenue from marijuana sales to offer housing grants to Black residents for past discrimination and the lingering effects of slavery.

6 cyclists in critical condition after being...

How Chainyard built a blockchain to bring...

4 More than 100 killed after monsoon in India triggers...