Lebanon's Information Minister Manal Abdel Samad announced on Sunday her resignation, citing the failure of the government to carry out reforms and the catastrophic explosion that rocked Beirut on Tuesday.

French President Emmanuel Macron's office, meanwhile, has confirmed it has organized an international aid conference for Sunday to support Lebanon and that the virtual talks will be co-hosted by the United Nations.

The blast at the portside warehouse, containing ammonium nitrate, caused $10 billion to $15 billion US in damage, according to Beirut's governor. It also killed more than 150 people, left thousands more wounded and damaged 6,200 buildings.

Some Lebanese called on Sunday for a sustained uprising to topple their leaders amid public fury over the disaster, and the country's top Christian Maronite cleric said the cabinet should resign.

Protesters have called on the government to quit over what they say was negligence that allowed 2,750 tonnes of explosive ammonium nitrate to be stored at the city's port since 2014.

Lebanese security forces fired tear gas at protesters demonstrating against the country's ruling class, which is blamed for mismanagement that led to Tuesday's explosion in Beirut. 10:54

Anger boiled over into violence scenes in central Beirut on Saturday.

Christian Maronite Patriarch Bechara Boutros al-Rai said the cabinet should resign if it cannot "change the way it governs." 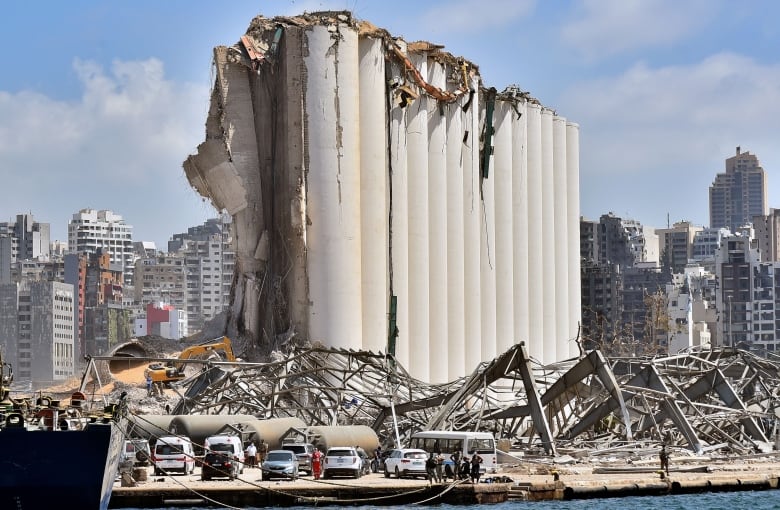 A grain silo in the port of Beirut is seen damaged on Saturday. (AFP via Getty Images)

"The resignation of an MP or a minister is not enough ... the whole government should resign if it is unable to help the country recover," he said in his Sunday sermon.

Dozens of people were injured in Saturday's protests, the biggest since October when thousands of people took to the streets in protests against corruption, bad governance and mismanagement.

About 10,000 people gathered at Martyrs' Square, which was transformed into a battle zone in the evening between police and protesters who tried to break down a barrier along a road leading to parliament. Some demonstrators stormed government ministries and the Association of Lebanese Banks.

Demonstrators defied dozens of tear gas canisters fired at them and hurled stones and firecrackers at riot police, some of whom were carried away to ambulances. One policeman was killed.

The Red Cross said it had treated 117 people for injuries on the scene on Saturday while another 55 were taken to hospital.

WATCH | Why Lebanese might fear aid channelled through government:

Soldiers in vehicles mounted with machine guns were stationed beside Martyrs' Square on Sunday.

"People should sleep in the streets and demonstrate against the government until it falls," said lawyer Maya Habli, as she surveyed the demolished port where the blast erupted.

Among the countries already offering assistance to Lebanon:

The damage at Beirut's port, where the blast occurred, shows the full power of the explosion. 1:26
lebanon information minister resigns world leaders conference

Virtual Disneyland? Someone is remaking rides...

3 ‘Teenage Bounty Hunters’ Is High School’s ‘Dead to Me’

5 UK Union Bectu Warns Of “Final Nail In Coffin For Many...

9 Someone Filmed A Duckling Falling Asleep With A Flower On...