The Eiffel Tower shut down Thursday, France's vaunted high-speed trains stood still and teachers walked off the job as unions launched nationwide strikes and protests over the government's plan to overhaul the retirement system.

Paris authorities barricaded the presidential palace and deployed 6,000 police for what's expected to be a major demonstration through the capital, an outpouring of anger at President Emmanuel Macron for his centerpiece reform, seen as threatening the hard-fought French way of life.

The Louvre Museum and other sites warned of strike disruptions, and Paris hotels struggled to fill rooms. Many visitors — including the U.S. energy secretary — cancelled plans to travel to one of the world's most-visited countries amid the strike.

Some travellers showed support for the striking workers, but others complained about being embroiled in someone else's fight. 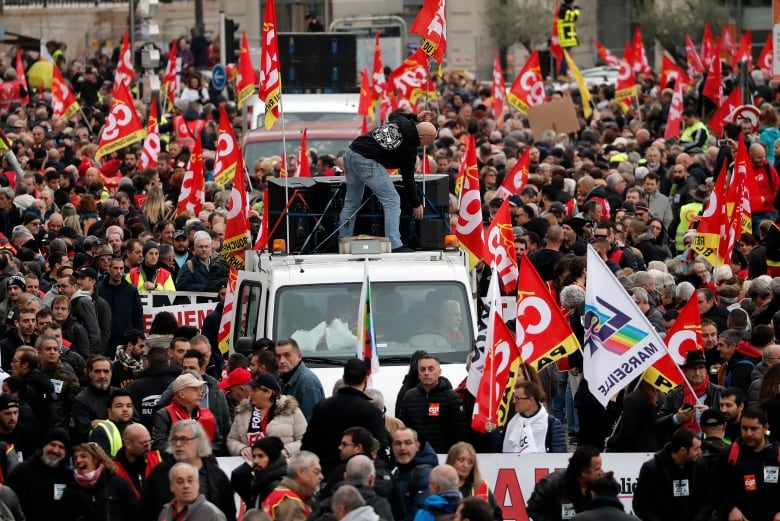 Unions representing railway and transport workers and many others in France's public sector have called for a general strike and demonstration to protest against French government's reform of the pension system. Here, workers demonstrate in Marseille. (Guillaume Horcajuelo/EPA-EFE)

"I arrived at the airport this morning and I had no idea about the strike happening, and I was waiting for 2 hours in the airport for the train to arrive and it didn't arrive," said vacationer Ian Crossen, from New York. "I feel a little bit frustrated. And I've spent a lot of money. I've spent money I didn't need to, apparently."

Subway stations across Paris were shuttered, complicating traffic — and prompting many commuters to use shared bikes or electric scooters instead. Many workers in the Paris region worked from home or took a day off to stay with their children, since 78 per cent of teachers in the capital were on strike.

Bracing for possible violence and damage along the route of the Paris march, police ordered all businesses, cafes and restaurants in the area to close. Authorities also issued a ban on protests on the Champs-Élysées avenue, around the presidential palace, parliament and Notre Dame Cathedral. Yellow vest activists plan to join unions at the protests in Paris and cities around the country, pressing their campaign for more economic justice.

The big question is how long the strike will last. Transport Minister Elisabeth Borne said she expects the travel troubles to be just as bad Friday. 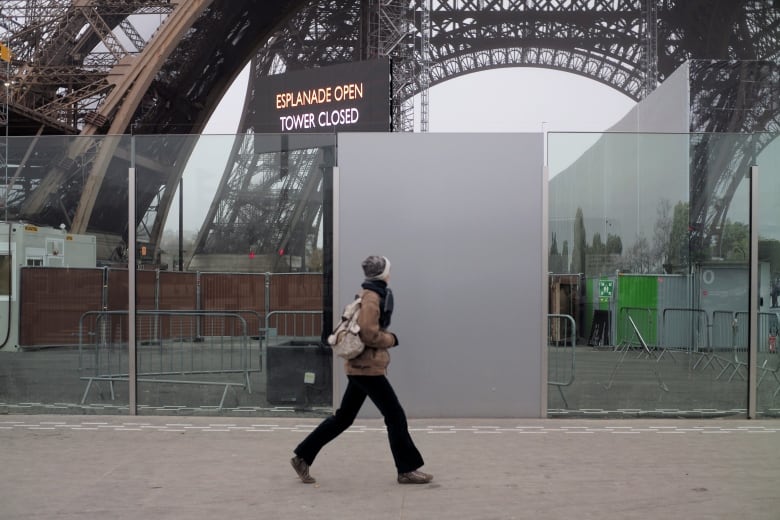 Public access to the Eiffel Tower is down as part of the nationwide strikes over the government's plan to overhaul the retirement system. (Rafael Yaghobzadeh/The Associated Press)

Unions say it's an indefinite movement and hope to keep up momentum at least for a week, in hopes of forcing the government to make concessions.

Public sector workers fear Macron's reform will force them to work longer and shrink their pensions. And they see this fight as crucial to saving France's social safety net.

"The five weeks of paid vacation, the state health care system — we got all that through social struggles from people who sacrificed themselves financially for us to get that," said rail worker Gilles Pierre, taking part in Thursday's march.

Pierre, who is 41 and according to the current system can retire at 52, acknowledges that the current system is generous, but argues that it's fair compensation for the constraints that go with jobs like his, like working on weekends and holidays.

"What do we want for our retirement years? To enjoy it or being a retiree in a hospital or in a bed and not being able to enjoy life?"

To Macron, the retirement reform is central to his plan to transform France so it can compete globally in the 21st century. The government argues France's 42 retirement systems need streamlining.

Many of the plans have different retirement ages and benefits. Macron says the system is unfair and too costly.

After extensive meetings with workers, the high commissioner for pensions is expected to detail reform proposals next week, and the prime minister will release the government's plan days after that.

stranger leaves an envelope for the man that...