Guzmán López, believed to be in his late twenties, is the son of Joaquín "El Chapo" Guzmán, Mexico's most famous drug trafficker, who is now serving life in a U.S. prison.

Ovidio Guzmán López, sometimes known as "El Chapito," is also being sought for extradition to the U.S. to face drug trafficking charges, thought to have taken over leading the Sinaloa cartel with his brothers.

The attempt to arrest Guzman on Thursday led to wild shootouts on the streets of Culiacán, the state capital of Sinaloa, about 1,200 kilometres northwest of Mexico City. At least eight people were killed and more than 20 others were wounded, authorities said Friday.

"The capture of one criminal cannot be worth more than the lives of people," he said during a news conference Friday. "This decision was made to protect citizens.... We do not want deaths. We do not want war." 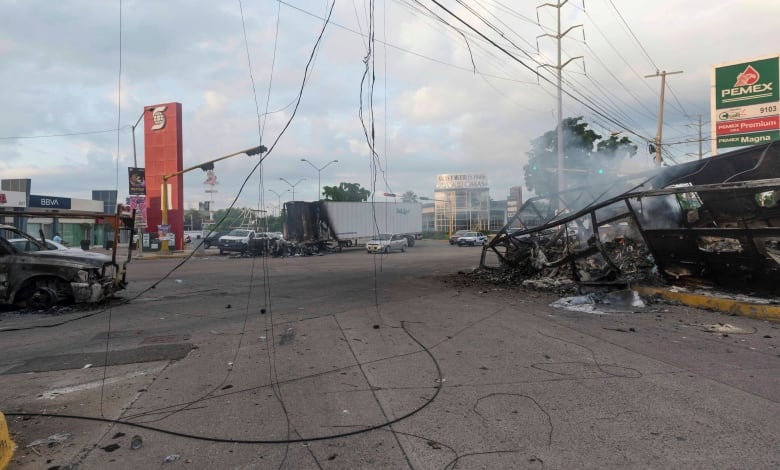 Burnt out vehicles smoulder on Friday in front of a Scotiabank, a day after the street battles between gunmen and security forces in Culiacán. (Augusto Zurita/The Associated Press)

Through a lawyer, the Guzmán family released a statement saying simply that "Ovidio is alive and free."

The decision to allow the wanted man to simply walk away from his captors seems certain to stoke tensions with the U.S. and other nations that co-operate with Mexico in the fight against drug cartels.

There were conflicting versions of how the arrest and subsequent release of Guzmán came about. Both the Mexican army and the country's new National Guard, created by López Obrador as part of his pacification program, were involved in the operation.

What is not in doubt is that the cartel reacted swiftly and violently to the capture.

Social media video and television footage from Culiacán show cartel gunmen roaming apparently at will through the city's streets, which are filled with burning vehicles. Cartel trucks mounted with .30- and .50-calibre machine guns can be seen parked at city intersections.

Watch as Mexican soldiers and cartel gunmen appear to negotiate in this video from local newspaper Noreste.

State authorities say 50 prisoners remain at large after they either escaped or were freed by cartel members.

The death toll is nothing unusual by Mexican standards: 13 police officers were killed in an ambush in Michoacán on Monday; Mexican soldiers killed 14 gunmen in another confrontation on Tuesday in Guerrero state.

But the decision to free Guzmán and cede the streets of Culiacán to the Sinaloa cartel is being seen by some in Mexico as a seminal shift in power between the government and drug cartels.

"What we saw was a surrender," said Excélsior columnist Jorge Fernández Menéndez, "and the ones left in control of the city of Culiacán are the criminals."

Another observer worried that other cartels could now be expected to ramp up their violence against the Mexican state.

"We have gone from what seemed a failed state to a state that has surrendered and been subjugated by the firepower and destabilization of the drug cartels," commentator Salvador Garcia Soto wrote in El Universal.

At Friday's news conference, López Obrador acknowledged that the decision to set Guzman free had been taken at the highest levels of his administration with his express consent.

When asked if the state had shown weakness, he said that criticism came from "those who are opposed" to his government's policies.

Video footage here shows a gunman lying on the ground firing a weapon in the city of Culiacan, Sinaloa today. Rumors suggest that one of Joaquín “El Chapo” Guzmán’s sons Ívan Archivaldo has been captured and possibly killed following a fierce gun battle in the city.... pic.twitter.com/ElCd94lc5n—@mexicoreporter

As Mexicans poured scorn on the government's claim that the action was taken to save lives, the president took to Twitter to quote the words of Mexican revolutionary general Felipe Ángeles: "With dedication to the soldiers of Mexico.... Nothing is sacred except man. There is something fragile, weak, but infinitely precious, that we all must defend: life."

Mexico's embassy in Canada responded to CBC News by pointing to the explanations given by López Obrador, and by his Secretary of Public Security Alfonso Durazo, who said, "We are not interested in walking through life shrouded in a blanket of spilled blood. We are going to win the peace, but not by converting Mexico into a bigger cemetery than it has already been for so many years."

A spokesperson for the Mexican Embassy in Ottawa added that authorities have not ceded control of the country to the cartel.

"The authorities' decision to withdraw from the zone was to ensure the protection of the inhabitants of the region," he said. "Neighbouring countries can of course trust that Mexico will maintain control of its territory and the rule of law."