Microsoft today announced the latest slew of features coming to Microsoft Teams for people at work and in education. This batch aims to “make virtual interactions more natural, more engaging, and ultimately, more human.” The majority of the additions are powered by AI, including Together Mode, Dynamic View, Cortana, suggested replies, and speaker attribution and translation for live captions and transcripts. Other new features include video filters, live reactions, chat bubbles, a Reflect messaging extension, Whiteboard updates, a new Tasks app, and support for more participants.

Microsoft Teams is the company’s Office 365 chat-based collaboration tool that competes with Slack, Facebook’s Workplace, and Google Chat, though lately it has shifted its competitive focus to Zoom, which has exploded during the pandemic to lead the video calling space. Microsoft Teams is the company’s fastest-growing business app ever. That was true in 2018, long before lockdowns started juicing up remote work and learning numbers. Microsoft’s Jeff Teper recently told VentureBeat that Teams “will be even bigger than Windows.” As of April, Microsoft Teams had 75 million daily active users, up 70% from just six weeks prior.

Together Mode and Dynamic View

Together Mode is the feature Microsoft is most excited about. It’s a new meeting experience that uses AI segmentation technology to digitally place participants in a shared background. Microsoft says this is meant to make it feel like you’re sitting in the same room with everyone else in the meeting or class.

This view strikes me as very teacher-centric — it’s what the presenter sees but not necessarily the audience. But Microsoft VP of Education Anthony Salcito disagrees.

“That’s certainly a natural way to a think about it, but the reality is the modern classroom is flipped,” Salcito told VentureBeat. “The students are often taking the center stage, so to speak. In a course of a daily class, in many cases pre-COVID-19, students were spending more time in front of the classroom presenting to their peers than the teacher. So in this model, you’ll have an environment where the students are seeing their classmates as they do presentations and lectures as well as the teachers. So it’s very, very natural. When we see students in the testing that we’ve had, everyone sort of looking up to the other screens and it’s much more interactive and immersive for students. So I don’t necessarily think that’s a concern for us. The initial testing has been very, very positive. It sort of breaks down the grid and seeing everyone in one place is a super upgrade to a lot of the grid model, especially for classrooms. So I think it’s going to be very very popular.” 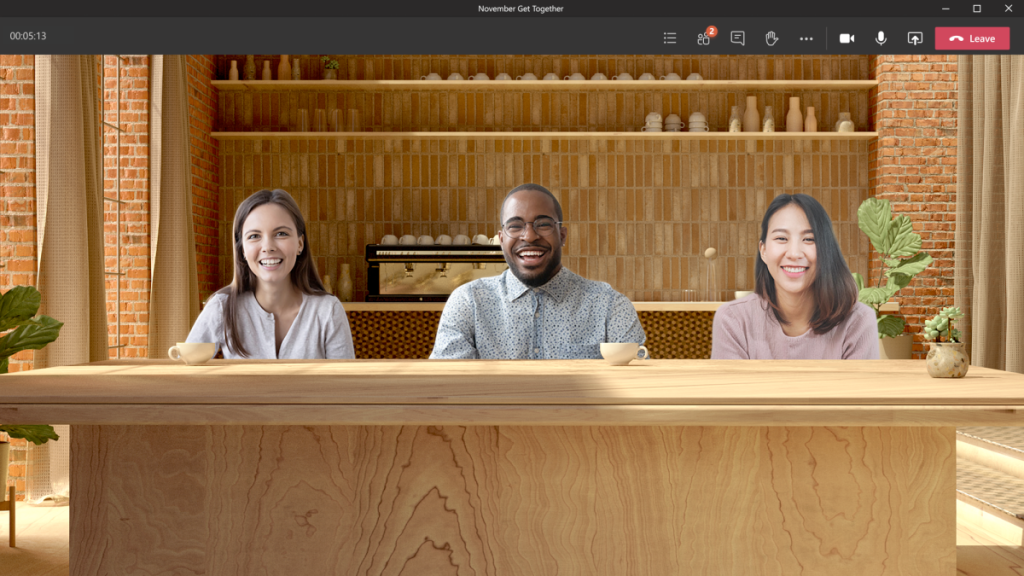 Microsoft claims Together Mode makes meetings “more engaging by helping you focus on other people’s faces and body language and making it easier to pick up on the nonverbal cues that are so important to human interaction.” The company expects it will be useful for meetings in which multiple people speak, such as brainstorms or roundtable discussions.

Microsoft acknowledges that Together Mode is “not intended for every meeting.” For traditional video meetings people use every day, the company is unveiling Dynamic View, which gives you more control over how you see shared content and other participants in a meeting. This view uses AI to dynamically optimize shared content and video participants.

Dynamic View also includes new controls that let you show shared content and specific participants side-by-side. Dynamic View should not be confused with Gallery View, which last month Microsoft announced is expanding to support up to 49 people in a meeting simultaneously, matching Zoom. At the time, the company also announced virtual breakout rooms, which let meeting organizers split meeting participants into smaller groups for things like brainstorming sessions or workgroup discussions.

When you think of Microsoft and AI, you probably think of the Cortana assistant, which the company has refocused on the enterprise. For Teams, that means Cortana is coming to the Android and iOS app,  where it will use AI and the Microsoft Graph to provide voice assistance.

You’ll be able to ask Cortana to make a call, join a meeting, send chat messages, share files, and so on. Microsoft promises to use Cortana enterprise-grade services that meet Microsoft 365 privacy, security, and compliance commitments. Cortana will be limited to Microsoft 365 Enterprise users in the U.S. in English for now.

If you’re not a fan of voice, you may appreciate suggested replies in Teams chat, which will use assistive AI to create short responses based on the context of the previous message. (Think Google’s Smart Reply.) If someone asks you “Do you have time to meet today?” Teams will suggest “I sure do!” so you don’t have to pull up your keyboard.

Microsoft Teams already provides live captions so everyone can follow what is being said in a meeting. Now Microsoft is adding speaker attribution to captions so that everyone knows who is speaking. That also enables Microsoft to offer live transcripts — after a meeting, the transcript file is automatically saved in the chat tab for that meeting. Microsoft will also add the ability to translate live captions into subtitles so you can follow along in a language other than the one being spoken.

Microsoft is also bringing video filters to Teams — before joining a meeting, you’ll be able to use them to subtly adjust lighting levels and soften the focus of the camera to customize your appearance.

Another way to not interrupt the conversation is to use chat during a meeting. Instead of having to manually open a chat window to view the chat screen, chat bubbles mean messages sent during a Teams meeting will surface on the screens of all meeting participants. 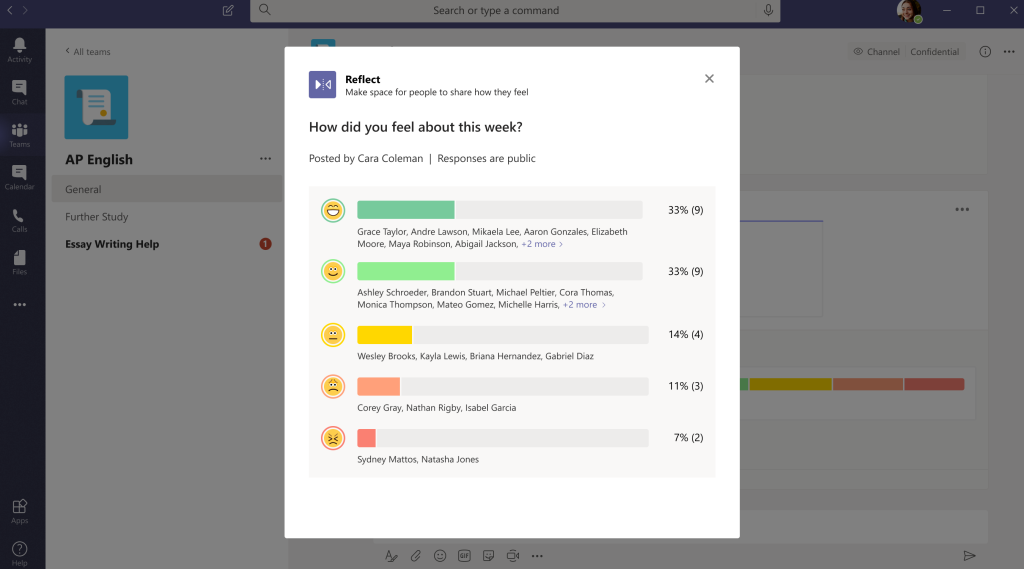 Speaking of messages, Microsoft is offering a new Reflect messaging extension to help managers, leaders, and teachers check in with how their team or students are feeling. That can be in general, or for a specific topic like work-life balance, the status of a project, current events, or a change within the organization. IT administrators will be able to install the Reflect extension from GitHub and make it available to employees in the message extension menu. The extension provides suggested check-in questions, custom questions, and anonymous poll results. 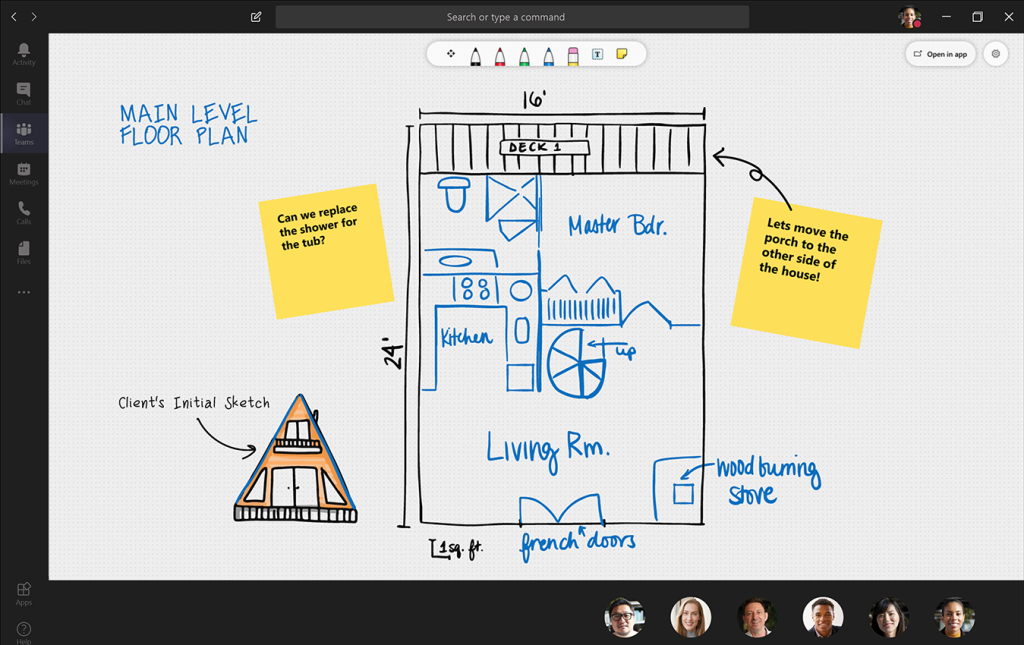 Whiteboard in Teams is getting a few updates as well: faster load times, sticky notes, text, and drag and drop capabilities. In short, you’ll be able to participate in whiteboarding sessions during Teams meetings even if you don’t have a touchscreen. 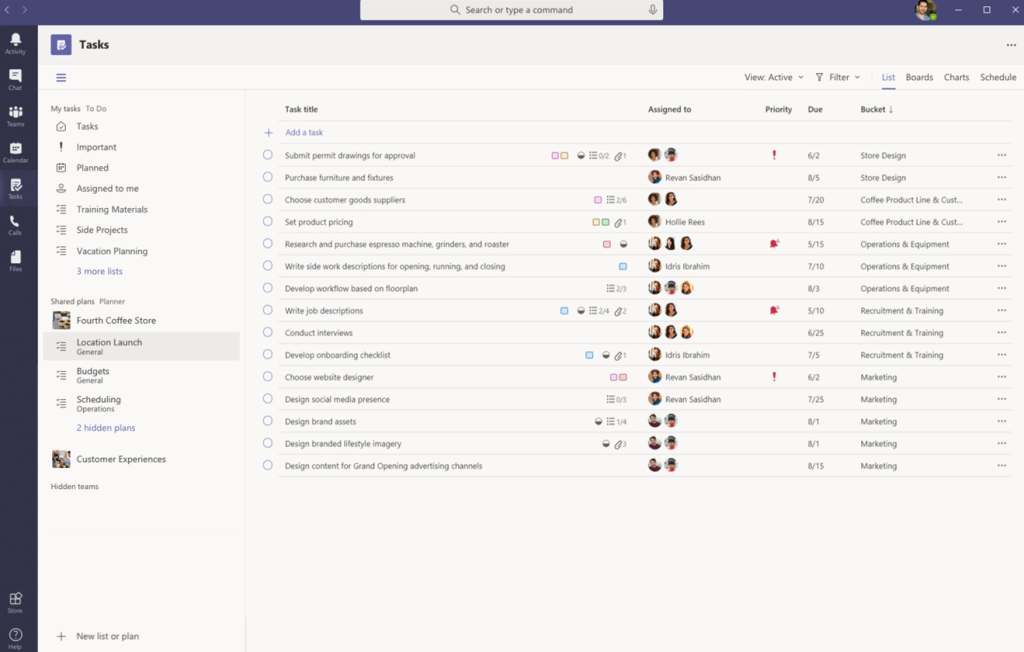 The Tasks app in Teams will bring tasks from across Microsoft To Do (RIP Wunderlist), Planner, and Outlook. It includes smart lists like “Assigned to me” across desktop, web, or mobile.

Microsoft today also briefly touched on Microsoft Teams displays, all-in-one dedicated Teams devices that feature an ambient touchscreen and a hands-free experience powered by Cortana. These aren’t really new — Lenovo announced the Lenovo ThinkSmart View at CES 2020 in January. In any case, the company highlighted today that these devices let you use natural language to ask Cortana to join a meeting, present slides, and dictate replies to a Teams chat.

Later this year, Microsoft will offer touchless meeting experiences on Surface Hub. A new room remote in the Teams mobile app will provide additional meeting controls including the ability to leave the meeting, mute and unmute the room, adjust audio volume, and turn cameras on and off. Voice commands will also be enabled for Microsoft Teams Room devices and you’ll be able to wirelessly cast to any Teams Room, collaboration bar, or Surface Hub.

When Microsoft announces new features for Teams, it’s not always clear when exactly each one will be available. So we asked the company to break it down:

Social media is having a field day with this...

Google’s Data QnA is an AI service that helps...