More than 100 injured as Palestinians and Israeli police clash at Al-Aqsa mosque, elsewhere in Jerusalem

Palestinian worshippers clashed with Israeli police late Friday at Jerusalem's Al-Aqsa mosque compound, a major holy site sacred to Muslims and Jews, in an escalation of weeks of violence in the city that has reverberated across the region.

The Palestinian Red Crescent emergency service said 136 people were wounded in clashes with police there and elsewhere in Jerusalem, including 83 who were hospitalized. It said most had wounds to the face and eyes caused by rubber-coated bullets and shrapnel from stun grenades. Israel said six police officers were wounded.

Earlier Friday, Israeli troops shot and killed two Palestinians and wounded a third after the men opened fire on a base belonging to Israel's paramilitary Border Police force in the occupied West Bank.

It was the latest in a series of deadly confrontations in recent weeks that has coincided with the Muslim holy month of Ramadan. More unrest appears likely next week.

Tensions have soared in recent weeks in East Jerusalem, which is claimed by both Israel and the Palestinians. At the beginning of Ramadan, Israel blocked off a popular gathering spot where Palestinians traditionally socialize at the end of their daylong fast. The move set off two weeks of clashes before Israel lifted the restrictions.

But in recent days, confrontations have resumed due to Israel's threatened eviction of dozens of Palestinians in the Sheikh Jarrah neighborhood in East Jerusalem, who have been embroiled in a long legal battle with Israeli settlers trying to acquire property in the neighborhood. 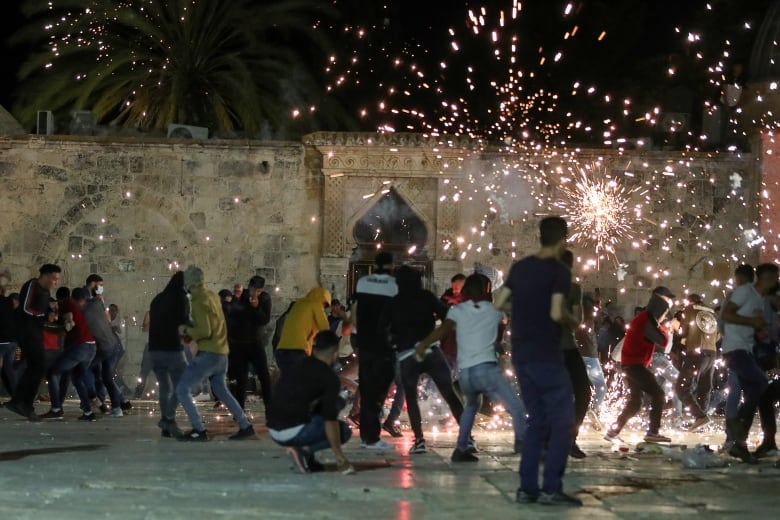 Palestinians react as Israeli police fire stun grenades during clashes at the compound that houses the Al-Aqsa mosque in Jerusalem's Old City on Friday. (Ammar Awad/Reuters)

The United States said it was "deeply concerned" and called on all sides to work to de-escalate heightened tensions. It also expressed concern about the threatened evictions.

"It's critical to avoid unilateral steps that would exacerbate tensions or take us further away from peace. And that would include evictions, settlement activity, and home demolitions," U.S. State Department spokesperson Jalina Porter told reporters in Washington.

The Al-Aqsa mosque compound is the third holiest site in Islam, and also the holiest site for Jews, who refer to it as the Temple Mount and revere it as the spot where the biblical Temples stood. It has long been a flashpoint for Israeli-Palestinian violence and was the epicentre of the 2000 Palestinian intifada, or uprising. 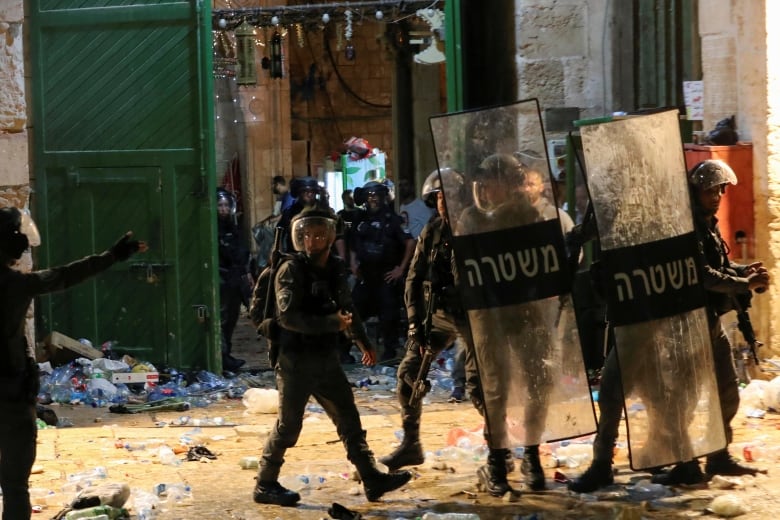 Israeli police are seen during the clashes at the Al-Aqsa mosque compound. (Ammar Awad/Reuters)

Israeli police were deployed in large numbers as Muslim worshippers held evening prayers at the site. It was unclear what sparked the violence, but videos circulating online showed worshippers throwing chairs, shoes and rocks at police, who fired stun grenades and rubber-coated bullets to disperse them.

"We will respond with a heavy hand to all violent disturbances, riots and attacks on our forces," the police force said in a statement.

Earlier, some 70,000 worshippers had attended the final Friday prayers of Ramadan at Al-Aqsa, according to the Islamic endowment that oversees the site. Thousands protested afterward, waving the green flags of the Islamic militant group Hamas and chanting pro-Hamas slogans. 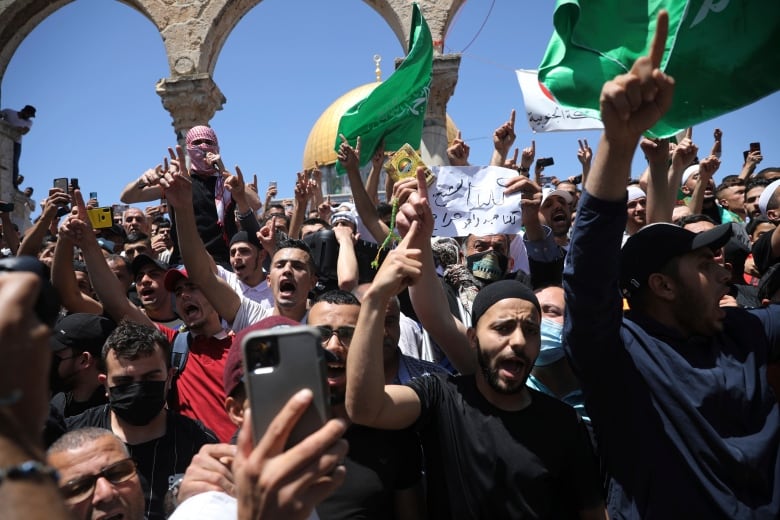 In the attack on Friday morning, Israeli police said three attackers fired on the base near the northern West Bank town of Jenin. The Border Police and an Israeli soldier returned fire, killing two of the men and wounding the third, who was taken to hospital.

Israelis and Palestinians are bracing for more violence in the coming days.

Sunday night is "Laylat al-Qadr" or the "Night of Destiny," the most sacred in the Muslim holy month of Ramadan. Worshippers will gather for intense nighttime prayers at the Al-Aqsa mosque compound.

Sunday night is also the start of Jerusalem Day, a national holiday in which Israel celebrates its annexation of East Jerusalem and religious nationalists hold parades and other celebrations in the city.

On Monday, an Israeli court is expected to issue a verdict on the evictions. 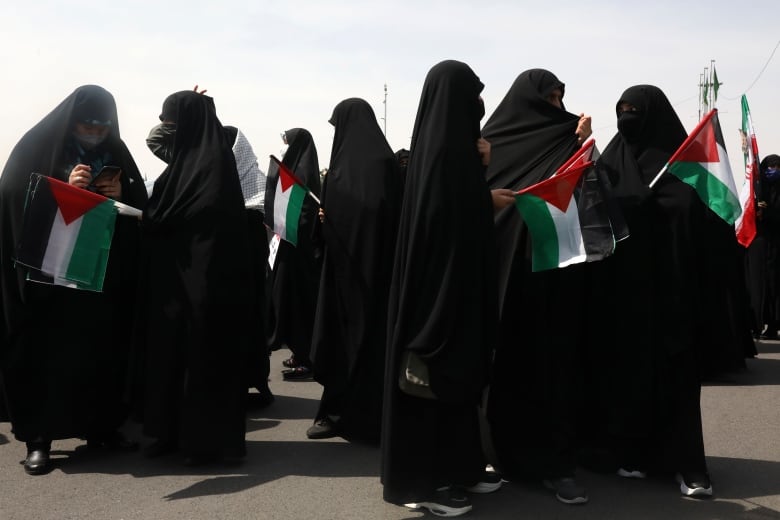 "The downward and declining movement of the Zionist regime has begun and will not stop," Supreme Leader Ayatollah Ali Khamenei said in a televised address. He called for continuing armed "resistance" in the Palestinian territories and urged Muslim nations to support it.

This year, Ramadan has coincided with an uptick in Israeli-Palestinian violence focused on Jerusalem.

On Thursday, Israeli forces arrested a Palestinian suspected of carrying out a drive-by shooting earlier this week in the West Bank that killed an Israeli and wounded two others. The day before, Israeli troops shot and killed a 16-year-old Palestinian near the West Bank city of Nablus. The military said several Palestinians had thrown firebombs toward soldiers.

Israel captured East Jerusalem, along with the West Bank and Gaza — territories the Palestinians want for their future state — in the 1967 Mideast war. Israel annexed East Jerusalem in a move not recognized internationally and views the entire city as its capital.

The Palestinians view East Jerusalem — which includes major holy sites for Jews, Christians and Muslims — as their capital, and its fate is one of the most sensitive issues in the conflict.

In a call to Palestine TV, President Mahmoud Abbas praised the "courageous stand" of the protesters and said Israel bore full responsibility for the violence.

Israel's Foreign Ministry had earlier accused the Palestinians of seizing on the threatened evictions, which it described as a "real-estate dispute between private parties," in order to incite violence.

"The (Palestinian Authority) and Palestinian terror groups will bear full responsibility for the violence emanating from their actions. The Israel police will ensure public order is maintained," it tweeted earlier in the day.