NASA's InSight lander arrived on Mars in 2018 to learn about its interior by monitoring "marsquakes," and now the project is starting to really pay off. NASA has announced that researchers have mapped the red planet's interior and discovered some big surprises and major differences with Earth.

The map is the first ever of the interior of another planet. Compared to Earth, Mars has a thicker crust, thinner mantle layer and a bigger, less dense and more liquid core than expected. That in turn suggests that Mars may have formed millions of years before our planet, when the sun itself was still not fully formed.

"It gives us our first sample of the inside of another rocky planet like Earth, built out of the same materials but very, very different," University of Cambridge seismologist Sanne Cottaar (who wasn't involved in the project) told the Wall Street Journal. “It is impressive.”
Constructing a map from the limited data provided by InSight was no easy feat. The probe only recorded quakes from one location and has just a single seismometer, for one thing. And Mars — while seismically active — didn't have any quakes larger than around 4 on the Richter scale. 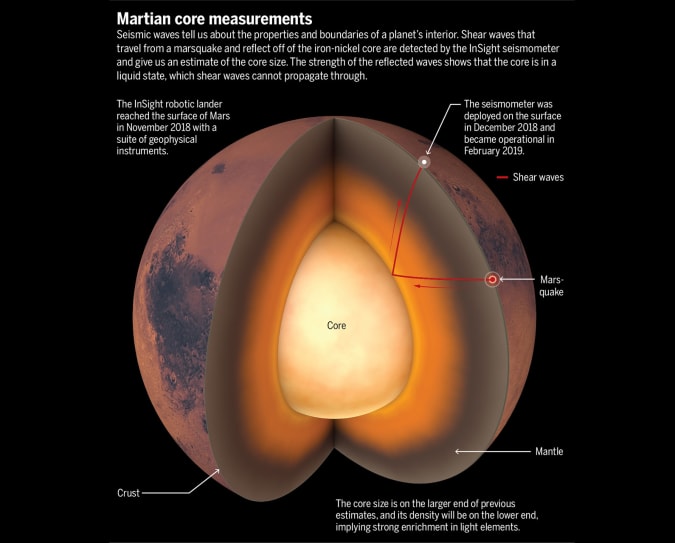 ScienceStill, taking that data, along with planet's magnetism and orbital wobbles, scientists were able to create a detailed map. The planet's innermost core was found to have a diameter of around 2,275 miles, larger than previously thought. Given the mass of the planet as a whole, that implies that the iron/nickel core likely contains lighter elements like sulfur, oxygen and carbon.
The crust, meanwhile, was found to be very old. It was also thicker in Mars' southern highlands and thinner in the northern lowlands, which may have hosted oceans long ago. On average, it's between 15 and 45 miles thick and split into several layers of volcanic rock.
The mantle between the crust and core extends roughly 970 miles below the surface. It's thinner than Earth's and has a different composition which suggests the two planets arose from different materials when they formed. This “might be the simple explanation why we don’t see plate tectonics on Mars,” ETH Zurich geophysicist and study co-author Amir Khan told the New York Times.
The results has given scientists new insight into not just the inside of Mars, but how rocky planets form in general. That will help them develop new theories about planet formation that could become particularly valuable in the near future, when new instruments like the James Webb Space Telescope will allow astronomers to scan exoplanets around the galaxy. NASA will reveal more about its findings in a live event later today.