Netflix’s Most Popular Original TV Series in 2021 (So Far) 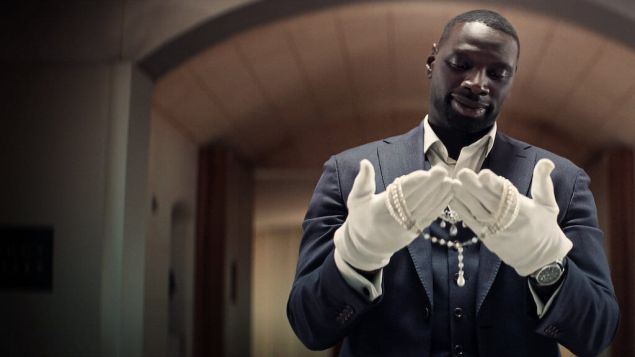 What are Netflix’s most popular original shows of 2021? Netflix

Viewership data, or ratings, is important to the general public because it cues us into what to watch if we want to be part of the water-cooler conversation. It’s an indication of which television shows are garnering the most attention. At the same time, TV ratings can provide validation for studios and the strategic, often expensive, decisions that are made at top levels. A hit series vindicates a sizable investment. For the talent involved, better understanding of the success and footprint of their shows provides them with leverage at the negotiating table. So in many ways, TV ratings are the nexus point between the trifecta of required Hollywood demographics.


Despite Netflix’s attempts at greater transparency (which dwarf every other major streamer), the perceived success of its original TV seres is still nebulous at best. The company is stringently selective when it comes to releasing viewership data and no third-party metric is perfect. So we put together our own list in an attempt to discern which Netflix original series are the most popular in 2021. 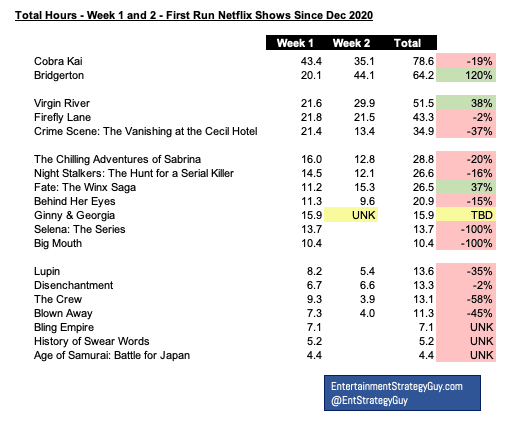 From there, we winnowed the list to shows that earned the bulk of their viewership in 2021. This eliminated series such as Virgin River (Nov. 27), Selena: The Series (Dec. 4) and Big Mouth Season 4 (Dec. 4). At this point, we examined Netflix’s self-reported ratings numbers where applicable, how long each show charted in Netflix’s U.S. Top 10, and incorporated Nielsen’s minutes-watched metrics to unearth the lucky winners. (Note: This is a collection of Netflix’s most-popular original shows in 2021, not a ranking.)

Of all the lucrative, envy-inducing nine-figure deals Netflix has handed out to splashy creators over the years, Shonda Rhimes is perhaps the only well-compensated creative to fully make good on their deal.


According to Netflix’s hazy self-reported ratings figures, 82 million viewers tuned into the steamy Regency romance drama Bridgerton within its first four weeks of availability. (Netflix counts any member account that watches for at least two minutes as a view). By the company’s internal metrics (which are not confirmed by third-parties), this makes it the most successful original in Netflix history. While impressive, this measurement does not take into account the growing size of Netflix’s subscriber base. Bridgerton arrived on the tail end of a banner year that saw a record 37 million new customers sign up. The larger the pie, the larger the slice.


But the show’s success is backed up by complementary metrics. Bridgerton spent 71 days in Netflix’s U.S. Top 10 list, the longest stretch of any series mentioned in this article. It also spent 11 straight weeks among the 10 most-watched SVOD originals in terms of Nielsen’s minutes-watched metric. This includes a staggering 6.7 billion minutes watched across eight episodes (ranging from 57 to 72 minutes) within its first four weeks of availability.

Season 3 of Cobra Kai, which premiered on Netflix after the first two seasons originally aired on YouTube, drew a projected 41 million viewers within its first four weeks of availability, per Netflix. If accurate, this would put Cobra Kai in the same vicinity as The Umbrella Academy, which is one of Netflix’s more successful originals. After migrating from YouTube to Netflix in August, the first two seasons of Cobra Kai immediately became a sensation, paving the way for a big jump with new episodes.


Season 3 also charted among Netflix’s U.S. Top 10 for 65 days, the second-longest stretch on this list. But here’s where we once again run into issues with our datasets. Season 3 consisted of 10 episodes, giving Netflix 30 total episodes of Cobra Kai. As episode counts grow, it’s only natural that Nielsen’s minutes-watched metric grow with it. (Cobra Kai episodes fluctuate between 22 minutes and 40 minutes).

Upon the release of Season 3, Cobra Kai spent five straight weeks among Nielsen’s Top 10 SVOD originals, including 6.4 billion minutes watched in its first four weeks. There’s little doubt that the highly anticipated third season was a hit for the streamer. But there’s also a reason why longer-running shows tend to perform well in Nielsen’s metrics. There’s simply more of it to be consumed versus the short run of our next entry.

Lupin debuted with just five episodes, the smallest number amid this list (episodes range between 42 and 52 minutes). It did not rank among Nielsen’s Top 10 SVOD originals in the first two days of its availability. While it did earn a spot on Nielsen’s list in each of the next two weeks, it “only” garnered 816 million total minutes watched in that span before falling out of contention. The series also only charted in Netflix’s U.S. Top 10 for 17 measly days, the shortest stretch among this group. But short episode counts naturally put a ceiling on the tail end engagement a series can muster. That doesn’t prevent a truncated show from delivering front-loaded success.

Despite Lupin‘s soft showing in the above metrics, Netflix revealed that a projected 70 million viewers tuned in over the show’s first 28 days of availability. If accurate, Lupin would be Netflix’s third most-popular original series ever according to its internal viewership metric, behind Bridgerton (82 million) and The Witcher (76 million). Part II is set to debut this summer.

Netflix has not released any viewership data for Firefly Lane, but there are other indications that the Katherine Heigl and Sarah Chalke-led series was a success. The suburban drama spent five straight weeks among Nielsen’s Top 10 SVOD originals in minutes watched. This includes a healthy 3.6 billion minutes over its first four weeks across 10 episodes (which ranged from 47-53 minutes).

In terms of one-week total viewership, Firefly Lane enjoyed one of the five best Netflix debuts (1.3 billion minutes) of any original series dating back to late November. The series also spent 37 consecutive days trending among Netflix’s U.S. Top 10, more than any of the honorable mentions we’ll get to and longer than Lupin‘s reign.


Netflix has not yet publicly renewed Firefly Lane for a second season.

Nielsen’s weekly minutes-watched rankings are four weeks delayed, which means the company’s most recent report covers March 1-March 7. This only gives us two weeks of data for Ginny and Georgia, which ran for 10 episodes (ranging from 50-58 minutes) in Season 1, but those two weeks speak volumes.


The series has charted among Nielsen’s Top 10 SVOD originals in the first two weeks of its availability, notching 2.5 billion total minutes-watched. Crucially, the series saw an uptick in viewership in Week 2 (1.1 billion minutes) versus Week 1 (953 million minutes), making it just the third series eligible for this list to rise in its second week. Ginny and Georgia has also spent 41 consecutive days trending on Netflix’s U.S. Top 10 and remained on the list at No. 10 as of this writing.


Though Ginny and Georgia opened softer in its first week than Firefly Lane, it appears to have a stronger tail with a longer run in the U.S. Top 10. Even Google Trends, which measures internet search traffic and can reflect interest and demand in a title, has it above Lupin and Firefly Lane and not too far behind Cobra Kai. 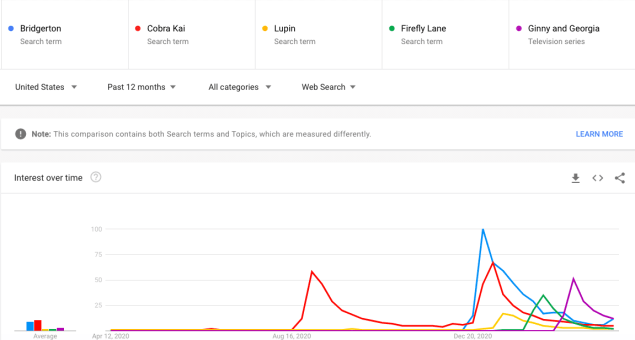 
Movie Math is an armchair analysis of Hollywood’s strategies for big new releases.