Netgear is launching a new router for gamers that attacks one of the biggest problems for gamers during the pandemic — lag. The networking company’s $350 Nighthawk Pro Gaming XR1000 WiFi AX5400 Router aims to reduce lag, or interaction delays, for console and PC gamers.

During the last six months of the pandemic, I’ve been particularly annoyed with the slowness of the internet when it comes to playing multiplayer games like Call of Duty: Warzone. I’ve tried a few different solutions to the problem that I’ll write about in an upcoming column. Meanwhile, this router could be one of my keys to victory in Warzone.

The Nighthawk Pro Gaming XR1000 WiFi 6 router is designed with the capacity to improve Wi-Fi performance by up to 40% and reduce the ping rates (the time it takes to send out a signal and get it back) up to 93% in a congested network, resulting in a less frustrating gaming experience.

“The major problem that gamers are facing these days is the latency-congested networks and slow internet Wi-Fi speeds, which are causing them to lose games,” Netgear product manager Max Wu said in an interview with GamesBeat. “If the ping rate is too high in first-person shooters, the gamer will have a choppy experience.”

While most internet networks can deal with bandwidth problems, lag is another story, based on my recent interview with the folks at Netgear as well as other interviews with Cable Labs and Comcast. Most homes have 15 or more devices connected to the network these days, Wu said. In a game, lag shows up when you’re aiming a gun at an enemy and they shoot you well before you can shoot them.

With the explosion in popularity of online games such as Fortnite, Apex Legends, Warzone, and PlayerUnknown’s Battlegrounds, gamers should think about how they’re getting online.

It won’t help that cloud gaming is clogging up networks further. In fact, Microsoft launched its Project xCloud cloud gaming service this week, and that could spell trouble for steady connections.

“So if your router does not have the proper quality of service software built in, to help you to prioritize your traffic, you will end up having a higher latency with the congestion,” Wu said. “If you have cloud gaming services like Google Stadia or GeForce Now, it will make these services unplayable.”

The router lets you reduce lag through geo-filtering. Or you can improve performance by allocating bandwidth to specific apps such as streams or games. You can control the maximum upload and download speeds per device on the network to minimize sudden lag spikes while gaming.

Using the Gaming Dashboard, you can spot bandwidth hogs on your network and remove them as needed. The device has new DumaOS 3.0 software that is designed for better gameplay and smoother video streaming. It tries to stabilize your ping, or the time it takes to send a signal out on the internet and then receive it back, and it reduces lag spikes.

The Nighthawk Pro Gaming XR1000 is the first Wi-Fi 6 gaming router powered by DumaOS 3.0 gaming software. It has customizable features including:

When all of these features are turned on, Wu said the result is the 93% reduction in lag.

“Now we can ensure gamers can connect to the closest server possible,” Wu said. “With the new geo-fencing, you can eliminate the server that would give you the worst ping rates, and still be able to use the servers that are better. You can adjust it if you are playing with friends, or adjust it again if you are playing by yourself.” 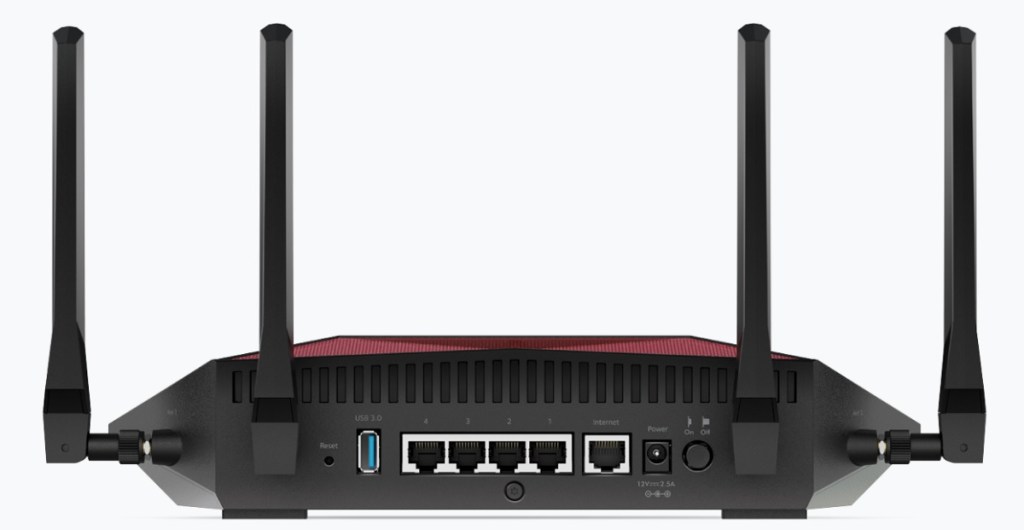 Above: The back of the Netgear Nighthawk Pro Gaming router.

Netgear launched its first Nighthawk Pro Gaming line of routers in 2018 to give gamers more control over their networks. As demand has increased and Wi-Fi 6 routing came along for faster wireless networking, the company decided to reinvest in the product line to beef up its attack on lag.

“When I was a lot younger I was really into cars and I see that people that are into PCs and competitive gaming are kind of like gearheads with cars,” Ben Acevedo, brand experience manager and gaming expert at Netgear, said in an interview. “Anything that you can get to get just that little extra inch, maybe it’s only one horsepower or one millisecond, you will go for it and chase those things down.”

He added, “With cars, it’s the tires that grip the road. And with online gaming, it’s your modem and your router. That’s what grips the internet. That’s what gets you where you want to go.”

9 The Good Doctor Needs To Do Something About Morgan After...