The long wait for ratification of the revised North American trade agreement appears to be nearly over, with word that congressional Democrats may be satisfied with the text of changes proposed by Donald Trump's trade representative and circulated over the weekend.

The Associated Press reported Monday that a tentative agreement had been reached with influential labour leaders and U.S. Trade Representative Robert Lighthizer, although the news agency also reported the details still needed to be finalized.

House Speaker Nancy Pelosi has yet to sign off, and Richard Trumka, the president of the American Federation of Labour–Congress of Industrial Organizations (AFL–CIO), has yet to confirm his endorsement.

Canadian government sources speaking to CBC News on background also cautioned that nothing is final yet.

"It's time, it's the moment," Mexican President Andrews Manuel Lopez Obrador told Pelosi at his regular news conference Monday morning, adding that time was short if the deal is to avoid being overtaken by next year's presidential election.

Lighthizer presented his Mexican counterpart, Jesus Seade, with proposed changes on Saturday. On Sunday, Mexican senators met to consider the new text and signalled their approval.

The leaders of all three countries signed what was at the time portrayed as the final text of the agreement over a year ago, on the sidelines of the G20 summit in Buenos Aires, Argentina.

In the months since, Democrats voiced concerns with the deal that was supposed to be fast-tracked through Congress. When Democrats gained control of the House of Representatives in the 2018 midterm elections, it left Lighthizer no choice but to make changes if he wanted the revised agreement to actually come to a vote.

As proposals to change the text continued to circulate on Friday, Deputy Prime Minister Chrystia Freeland told the House of Commons that she was in frequent contact with Lighthizer.

An agreement now allows Lighthizer to complete modifications to the implementation bill that NAFTA proponents still hope could be brought to the floor of the House before its Christmas break.

The American ratification process is complex, with multiple stages remaining, including approvals from powerful House and Senate committees. At the same time, the attention of American lawmakers risks being dominated by impeachment proceedings and, soon, the presidential primary season.

Groups representing Canadian industries that could be affected by the revised text told CBC on Monday that they had yet to be briefed on exactly what changes have been made as part of this compromise.

Following his Nov. 29 meeting with Freeland, Seade told reporters that the Democrats' concerns were valid, and the changes under discussion were going to improve the deal. 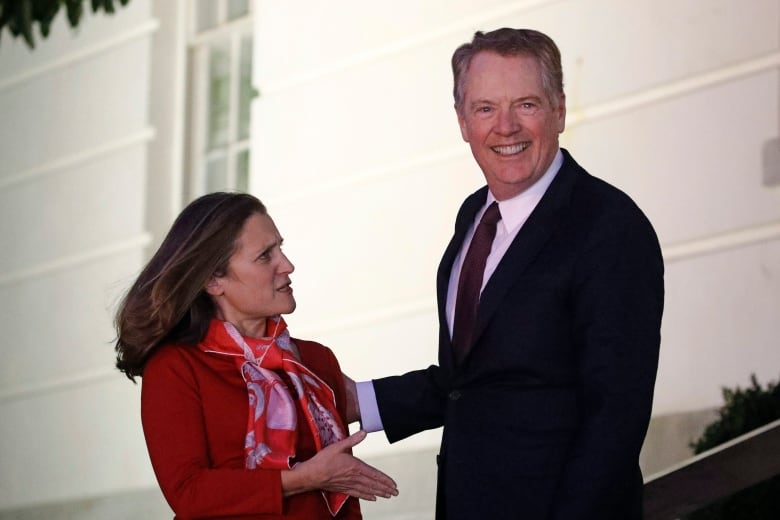 Seade confirmed that a loophole that allowed one country to block the establishment of an arbitration panel should disputes arise under the revised agreement was being fixed.

New text to change the deal's state-to-state dispute resolution chapter is one reason the three countries are expected to need to re-sign the agreement (or some add-on to the agreement). No details for such a ceremony have been announced, pending confirmation that all sides are signing off.

Seade also confirmed that changes were pending to the deal's intellectual property rules for new biologic drugs, with some news outlets reporting last week that this measure has been deleted from the deal altogether.

CBC has not independently confirmed this removal with Canadian government officials, who have consistently refused to negotiate in public by signalling their approval or rejection of various proposals.

Pharmaceutical representatives contacted by CBC last week said they would not speculate or comment until they had seen the final text, although Canada's generic industry said they would support an improvement like removing the obligation for 10 years of data protection for biologic drugs.

It's unclear if everything some Democrats were asking for is reflected in this compromise, including demands for strict enforcement of labour and environmental conditions at Mexican facilities, including a stepped-up inspection regime.

A Canada–Mexico working group on labour issues met in September, although its work is only in the early stages.

Budget spending estimates tabled last week in Parliament did not allocate new funds to pay for its future activities. As part of this process, Canadian experts in labour law and union organizing are expected to help set up collective bargaining at potentially thousands of Mexican facilities, in order to bring them into compliance with the deal's new standards.

Late last week, American news outlets also reported that further changes were sought to the deal's digital chapter as it pertains to the liability of internet service providers for the content they host.

The precise definition of "North American steel" was also part of the end-game discussions that dragged on between Lighthizer and Seade for the better part of last week. Mexico was reluctant to accept a definition that would require all the steel to be "melted and poured" in North America, but Foreign Minister Marcelo Ebrand said Sunday it would concede if this rule took effect at least five years after ratification.

Details on how these additional changes could impact Canadian industries remain to be revealed.

Canada has yet to ratify the successor to NAFTA. The Trudeau government introduced an implementation bill in the previous Parliament, but it did not pass before this fall's election.

If this latest compromise in Washington results in breaking the logjam that has held up U.S. ratification, the Liberals are expected to reintroduce (potentially updated) implementation legislation in the House of Commons this winter, to bring Canadian laws and regulations into compliance with the revised text.

How to play Half-Life on Oculus Quest

2 Hillary Clinton shares thoughts on impeachment and a note...

3 Multiple Rockets Crash Near U.S. Embassy In Baghdad Amid...

9 Schiff Says Republicans Should Learn From His ‘Moral...