When Russian movie producers decided to give the Chornobyl nuclear catastrophe the feature-film treatment, they looked to former firefighter Nikolai Chebushev for inspiration.

"I had to prepare the personnel — and they were absolutely unprepared," he recalled about being summoned to the site of the world's worst nuclear accident on April 26, 1986, and ordered to put out the fire at the No. 4 reactor.

By the time Chebushev got to the plant, he said, the fire trucks at the site — which had been pulled in from all over Ukraine and other parts of what was then the Soviet Union — were already covered in radioactive debris.

Now 71, Chebushev still lives in Kurchatov, Russia, his home at the time of the explosion, located about 1,000 kilometres east of Chornobyl. He survived the disaster but suffered from radiation poisoning.

The Russian town also served as a stand-in for Chornobyl during production of the movie, as it contains a still-functioning nuclear power plant with several reactors identical to the one that exploded 35 years ago. Filming took place at a reactor that was never completed and has been abandoned ever since the disaster. 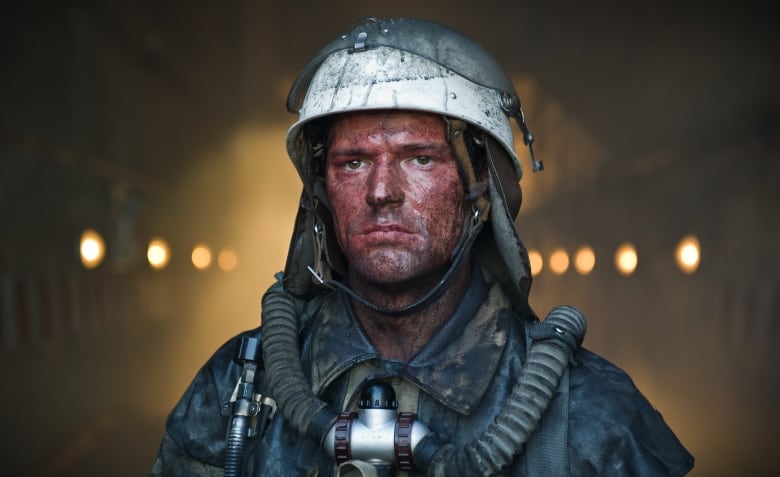 A scene from the new Russian-made movie Chernobyl: Abyss. The movie is now playing in Russian cinemas after an extended production schedule prolonged by the COVID-19 pandemic. (Non-Stop Production)

His fictionalized character in the movie is played by Russian leading man Danila Kozlovsky, who also directed the new feature film, Chernobyl: Abyss.

Movie called a 'fantasy' by firefighter at scene

The movie, whose original title in Russian translates as When the Storks Fell, is now playing in Russian cinemas after an elongated production schedule due to the COVID-19 pandemic.

The first part of the movie is a love story involving Alexey, played by Kozlovsky, and an old girlfriend, played by Oksana Akinshina, who are struggling to reconnect after years of estrangement. Then the reactor explodes, throwing their lives into disarray and forcing Alexey to make a life-or-death decision.

He teams up with an engineer and a military diver on a near-suicide mission to drain water from a reservoir under the flooded reactor in a bid to avert a catastrophic explosion.

Chebushev discussed being a consultant on the film but said he declined because the producers weren't being historically accurate about the work of the clean-up teams. 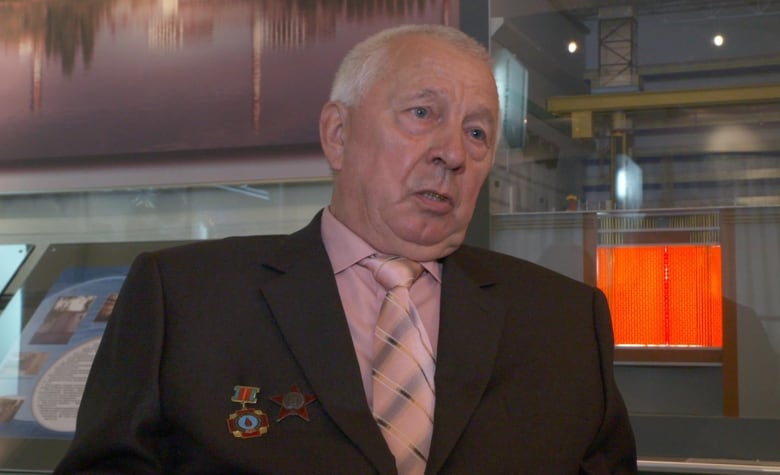 Nikolai Chebushev was head of the fire brigade at the Kurchatov nuclear plant and was tasked with putting out fires at its devastated sister plant in Chornobyl, 1,000 kilometres away in April 1986. (Dmitry Kozlov/CBC)

In particular, he said, a scene where the trio of heroes dive into radioactive water and then hold their breath and swim under the reactor never happened. Instead, the men waded through water to get to the valves that had to be opened, he said.

Chebushev and other clean-up workers — known as liquidators — were recently given a private screening and met Kozlovsky and other cast members.

But he said he came away from the experience unsettled.

"I had to laugh," Chebushev told CBC News in an interview. "In the film, Danila [Kozlovsky] was evacuated to Switzerland for treatment — but for me, well, they organized a flight to Kursk (Russia)." 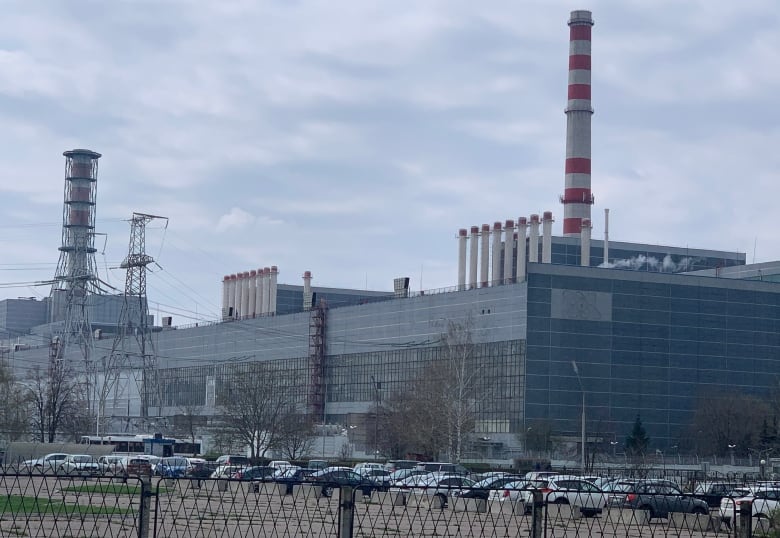 The Kursk nuclear power plant, next to the village of Kurchatov, Russia, was used in the filming of the movie Chernobyl: Abyss. Many residents were offered bit parts in the movie. (Corinne Seminoff/CBC)

He called the production a "fantasy" that downplayed the misconduct and lies that Soviet authorities told in an effort to conceal the extent of the disaster.

Chebushev said people didn't think of themselves as heroes at the time because they had no idea what they were being asked to do.

"This is terrifying when people have no idea what they came for. The people they sent to deal with it got acute radiation sickness, and within half a year [many] were dead," he said.

WATCH | The trailer for Chernobyl: Abyss:

The official Soviet death count of 30 fatalities vastly understates the thousands who died in the months and years that followed from cancer or other forms of radiation, according to subsequent United Nations reports. To this day, there is little agreement on the true casualty toll.

The release of the Russian movie comes two years after HBO's critically acclaimed miniseries Chernobyl, which focused on the attempts of Soviet authorities to take safety shortcuts and later hide the extent of the contamination from the disaster.

The HBO treatment was lauded for its realistic portrayal of Soviet society and its painstaking re-creation of the minute details of its characters' lives — although some Kremlin-connected watchers complained of anti-Russian overtones in the production and others, including prominent Russian-American journalist and Putin critic Masha Gessen, criticized it for oversimplifying the events.

Shortly after the HBO series debuted, famed Russian producer Alexander Rodnyansky announced that his company, Non-Stop Production, had already been working on a Russian version of a film treatment of the Chornobyl disaster for several years — but with a different focus. 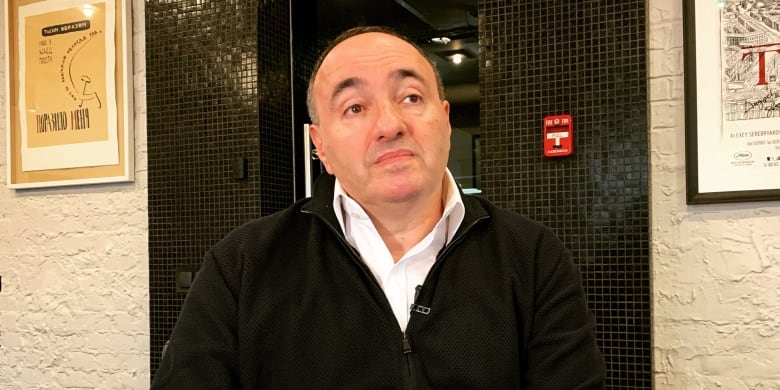 Alexander Rodnyansky produced the movie about the disaster. He said his film focuses on the ordinary people who were asked to do extraordinary things rather than the 'ineffective' Soviet system. (Pascal Dumont/CBC)

"We definitely know what happened in 1986 — every single Soviet citizen knew that the reason for the disaster was the Soviet system. It was ineffective," Rodnyansky told CBC News in a recent interview at the Oktyabr Cinema in Moscow, on the night his film premiered.

Instead, he said, his movie is about ordinary people who were asked to do extraordinary things.

"Our movie works very well along with the HBO series, because these are the different aspects of what happened," he said. "Our story tells about how the normal people — the hostages of this [Soviet] machine — find themselves in a position to stop the disaster."

But several of the clean-up workers who spoke to CBC News said they remain haunted by the experience and that most Russians don't appreciate how the coverup doomed so many of the liquidators to early deaths.

'I wake up at night and I can't forget Chornobyl'

In that sense, says Nikolai Tarakanov, the movie was a missed opportunity.

"This movie doesn't teach us anything," said Tarakanov, a former Soviet general who was among the highest-ranking people on the ground at Chornobyl in the immediate aftermath of the disaster. 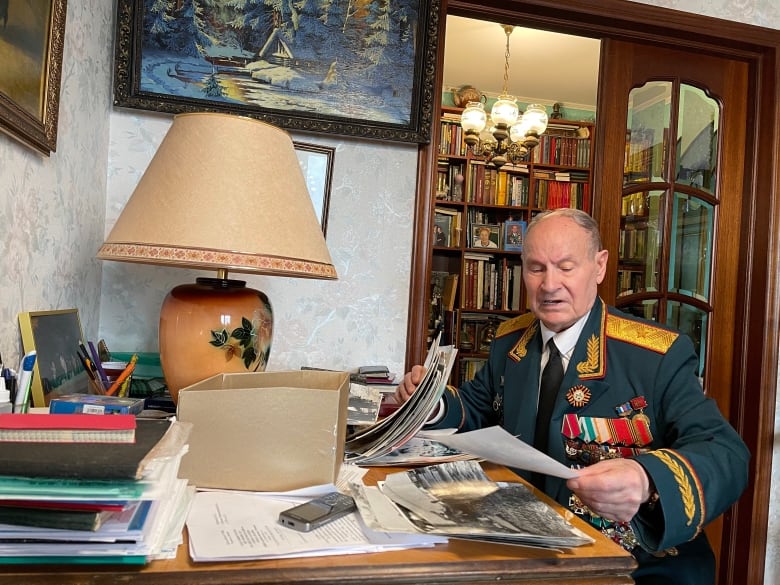 Former Soviet general Nikolai Tarakanov at his home in Moscow. He was one of the highest-ranking people on the ground in the aftermath of the Chornobyl explosion 35 years ago. (Alexey Sergeev/CBC News)

In the HBO production, his character — portrayed by British actor Ralph Ineson — is shown ordering workers into extremely contaminated parts of the destroyed power plant.

"I wake up at night, and I can't forget Chornobyl," Tarakanov told CBC News in an emotional interview at his Moscow apartment.

"I had to tell them: 'There is a decree of the Ministry of Defence which orders the removal of radioactive fuel. I will give you a moment to think about it.'"

Tarakanov, 87, came close to tears as he remembered the soldiers who are no longer alive. 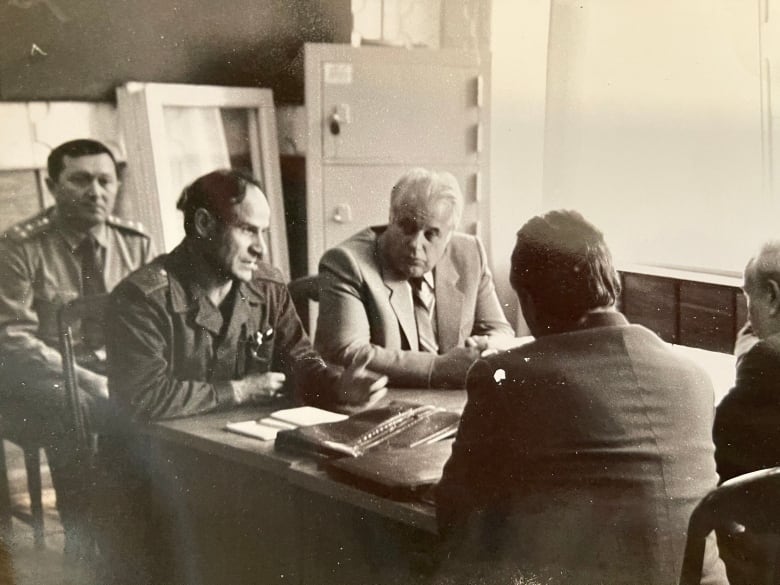 Tarakanov, left, speaks to other Soviet officials about the cleanup of the nuclear power plant in Chornobyl in 1986. (Submitted by Nikolai Tarakanov)

"No soldier refused during the 20 days of work — they removed 10 tonnes of radioactive fuel! Ten tonnes!"

More than two decades after the explosion, he said, Russian President Vladimir Putin cut the pensions of liquidators, a move he said has left him "ashamed."

Many residents in Kurchatov were offered bit parts in the Chornobyl movie, including 24-year-old Natalia Krulova, who works as a sales engineer at the town's nuclear plant.

She told CBC News she found the movie enjoyable but wondered if it was too politically sensitive in Russia to make a film that casts authority figures in a bad light.

"The film didn't show like ... the HBO film that when the tragedy happened, they tried to cover it up,"  she said.

"I think they are afraid ... to talk about what they did not talk about before." Chernobyl survivor Vasyl Kawatsruk shares his experience on the 25th anniversary of the nuclear disaster 5:53

Perhaps not surprisingly, senior leaders at Rosatom, Russia's state nuclear energy corporation, which operates the nine Chornobyl-style reactors in the country, also had mixed feelings about the final on-screen product.

"We use the Chornobyl example when we are training our workers — that we have to show a real respect for the nuclear atom we work with and take it seriously. Because if not, the consequences could be catastrophic."

Rodnyansky, the movie's producer, said most of the feedback he's received has been overwhelmingly positive, including from those who were at Chornobyl 35 years ago. 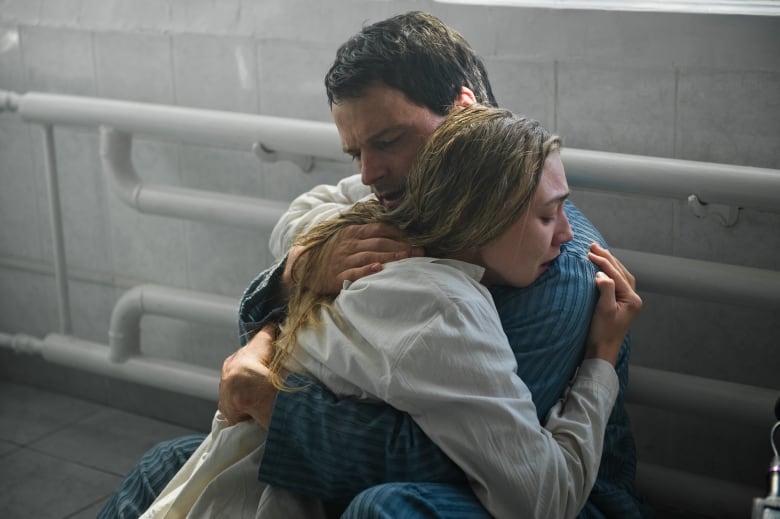 "This is a time machine for them," he said. "They were really grateful to the [movie makers] who provided them with a huge deal of respect.

"This is our attempt, our try, to say thank you to those people."

Netflix’s ‘All Quiet On The Western Front’...