Europe's extensive social welfare net was showing signs of fraying under economic strain from the coronavirus, as protests erupted Friday for a second day in Spain against layoffs by French carmaker Renault, while Italy's chief central banker warned that "uncertainty is rife."

Elsewhere, New Zealand has all but eradicated the coronavirus with just one person in the nation of five million known to be infected. But developments were grim in other nations, with India reporting a record increase in cases, and Pakistan and Russia a record number of deaths.

In New Zealand, health authorities have reported no new virus cases for a week. Of the 1,504 people who were infected, 22 have died but all but one have now recovered. The nation's borders remain closed, and staying virus-free when they reopen poses a big challenge.

In the first major increase since it started gradually reopening on May 11, France reported more than 3,000 new daily virus infections. It was not immediately clear if the spike was due to a greater availability of testing.

In the United States, the virus threw more than two million people out of work last week despite the gradual reopening of businesses, stoking fears it is doing deep and potentially long-lasting damage to the world's largest economy.

The latest job-loss figures from the U.S. Labour Department bring to 41 million the running total of Americans who have filed for unemployment benefits since the coronavirus shutdowns took hold in mid-March. 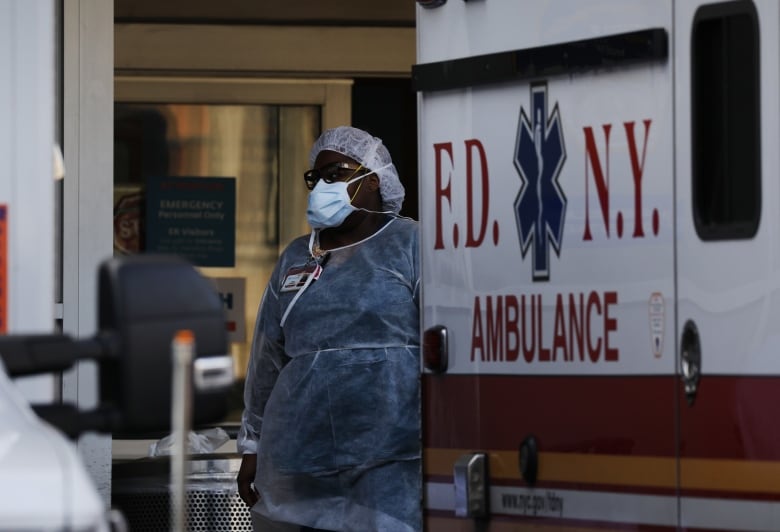 Strong safety-net programs in many European countries have been underwriting the wages of millions of workers and keeping them on the payroll instead of adding them to the ranks of the unemployed. But the limits were starting to show.

In Britain, Treasury chief Rishi Sunak was expected to tell employers that starting in August, they'll have to share the costs of a program that has effectively placed furloughed workers on the government payroll.

Sunak said the government can't pay indefinitely for a program that has cost 15 billion pounds (more than $25 billion Cdn) to cover 80 per cent of wages of some 8.5 million people. It is in place until October, although the final months will require employer input.

Even as it sought a government loan from France, struggling carmaker Renault announced 15,000 job cuts worldwide as part of a 2 billion-euro cost-cutting plan over three years, as demand for cars plunged around the globe. 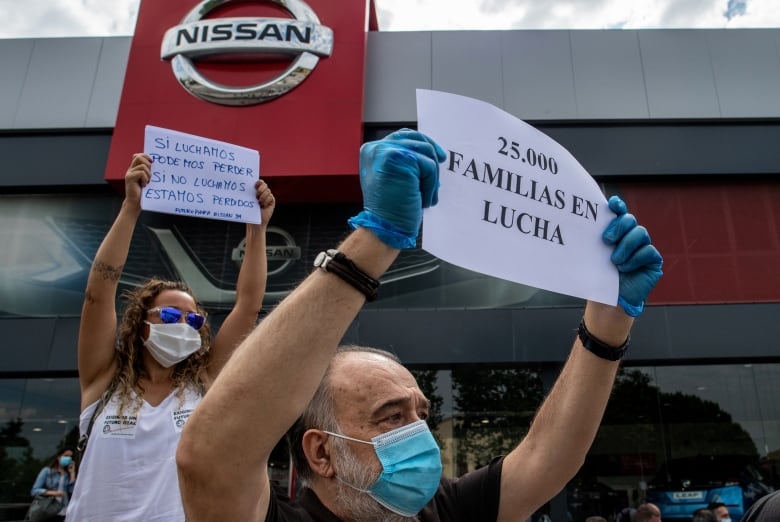 Nissan employees hold a banner as they protest outside a Nissan authorized dealer on Friday near Barcelona. Nissan announced the closure of its factory in Barcelona and the loss of about 2,800 jobs, as part of a restructuring that will focus on 'key markets' like North America, China and the U.K. (David Ramos/Getty Images)

That had a knock-on effect in Spain, where Nissan is rolling back production in a move Madrid said would mean 3,000 direct job cuts and as many as 20,000 additional jobs in the supply chain.

Spanish workers took to the streets for a second day to protest the closure of three Barcelona plants. Hundreds of workers surrounded at least four Nissan car dealerships in or around the northeastern city, covering their windows with leaflets reading, "Nissan betrays 25,000 families," and, "We will keep fighting."

The governor of the Bank of Italy, Ignazio Visco, in his annual address, said Europe's fourth-largest economy could contract by as much as 13 per cent this year under a pessimistic scenario that foresees a huge drop in world trade and an intense deterioration of financial conditions.

"Today uncertainty is rife, not only about the course of the pandemic but also about the repercussions on behavioural patterns, on consumption and on investment decisions," Visco said.

"After the pandemic wanes, the world will be a different place."

How different will depend on how leaders manage rising unemployment, lower consumption and the prospect of social unrest, he said.

The 27 EU nations this week started discussing what was once unthinkable — the notion of the EU pooling debt and raising huge sums of money to fund the recovery from the pandemic.

"European economies are suffering," EU Commission Vice-President Margrethe Vestager said in Brussels. "A lot of people are at risk of losing their jobs. Our lives and livelihoods still depend on us working together — not least, by pooling Europe's resources, to help our economy get through this crisis."

Pakistan reported 57 deaths, its highest single-day increase since the outbreak began. That increased the overall death toll to more than 1,300, while the number of confirmed cases rose to over 64,000.

Russia again reported the highest daily spike in coronavirus deaths, with health officials registering 232 in the last 24 hours, bringing the country's total to 4,374 — considered by experts a significant under count for a country where confirmed cases exceed 387,000. 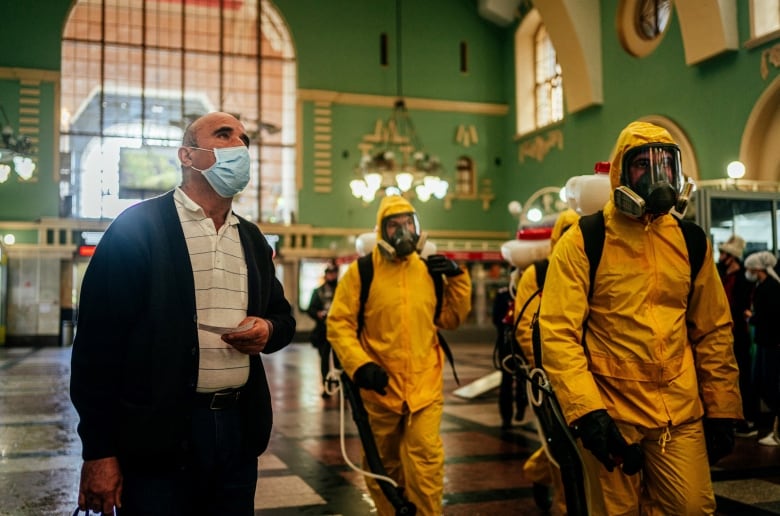 Workers in protective gear disinfect Moscow's Kazansky railway station on Thursday. The country stands behind only the U.S. and Brazil in terms of the number of confirmed coronavirus cases. (Dimitar Dilkoff/AFP/Getty Images)

Israel's Health Ministry, meanwhile, warned people not to "slip into complacency" after recording a spike in new cases, with outbreaks linked to schools, which recently reopened.

South Africa says it has a backlog of nearly 100,000 unprocessed tests for the coronavirus, a striking example of the painful shortage of testing materials across Africa as cases steadily rise.

In the U.S., where the death toll is the world's highest, surpassing 101,000, there were some encouraging signs in the economic data.

The number of Americans currently drawing jobless benefits dropped for the first time since the crisis began, from 25 million to 21 million. And first-time applications for unemployment benefits have fallen for eight straight weeks as states gradually let stores, restaurants and other businesses reopen and the auto industry starts up factories again.

But the number of U.S. workers filing for unemployment benefits is still extraordinarily high by historical standards, and that suggests businesses are failing or permanently downsizing, not just laying off people until the crisis can pass, economists warn.

"That is the kind of economic destruction you cannot quickly put back in the bottle," said Adam Ozimek, chief economist at Upwork.

Worldwide, the virus has infected more than 5.8 million people and killed about 360,000, according to a tally by Johns Hopkins University. The true dimensions of the disaster are widely believed to be significantly greater, with experts saying many victims died without ever being tested.

10 Hawaiian Crew Goes On A 48-Day Expedition And Sets Record...