Home /
NEWSiNi /
No Ellen, it's not okay to be friends with George W. Bush (or: How I Learned To Stop Trusting Celebrities)

No Ellen, it's not okay to be friends with George W. Bush (or: How I Learned To Stop Trusting Celebrities)

This week, American chat show host Ellen DeGeneres has been at the centre of controversy for justifying her friendship with George W. Bush.

Having been criticised for sitting and joking with the former president at an NFL game, DeGeneres responded a monologue doubling down on her chuckles with Dubya, and explaining why such a thing is Good, Actually.

"Just because I don't agree with someone on everything doesn't mean that I'm not going to be friends with them," Ellen said. "When I say be kind to one another, I don't mean only the people that think the same way that you do, I mean be kind to everyone."

The fallout has pulled in all sorts of other celebrities who have flocked to Ellen's message of kindness at all costs. Reese Witherspoon. Lennie Kravitz. Even Robbie Keane popped up in the comment section with a few clapping emojis. That's what too much time in LA does to a man, I suppose.

There are limits to Ellen's kindness however. For example, Ellen has said that she would not have Donald Trump on her show. It suggests a very muddled criteria for friendship on Ellen's part.

Trump might be publicly reviled by pretty much all of Hollywood's elite, but his actions aren't in the same league as George W. Bush.

Through the War on Terror, Bush pursued a military operation that could not be won, under false pretences, at the expense of the lives of hundreds of thousands of Iraqi civilians.

His rogue foreign policy was ultimately responsible for the full and seemingly terminal destabilisation of the Middle East, the advent of international terror groups like ISIS, and insurgency movements that terrorise multiple Middle Eastern countries to this day.

He decimated Afghanistan in search of Osama bin Laden, who was not there, as retaliation for 9/11 — an attack that was funded and masterminded almost entirely by men from Saudi Arabia (like bin Laden himself) and Egypt, not Afghanistan. Eventually, when bin Laden was found, he was in Pakistan.

Those wars are far from over, and Middle Eastern conflict has become the defining conflict of this generation. It is probable that there is no living person with a higher death toll than George W. Bush.

Protests against the war on terror attracted numbers that Donald Trump could only dream of. Millions in Madrid, London... One rally in Rome holds the record for the largest ever anti-war rally.

Yes, that was me at the Cowboys game with George W. Bush over the weekend. Here’s the whole story. pic.twitter.com/AYiwY5gTIS

In domestic terms, it was Bush who presided over the financial crash of 2008, which led to the global recession. Bush vehemently supported a constitutional amendment that would have banned same-sex marriage, and he also fought against a law that would prohibited businesses firing employees on the basis of their sexual orientation. His flaccid response to Hurricane Katrina almost certainly condemned New Orleans to a tragic fate from which it has not recovered.

George W. Bush could have never asked for a better blow to society's soft, stupid head than Donald J. Trump. Such is the outrage over the billionaire president, a sort of amnesia has set in about everything that came before him.

Trump has devastated our standards when it comes to things decorum and civility. "Kindness," as Ellen would call it. And in this new world where a president might openly use racial slurs or make sexist remarks or mock the disabled, Bush does seem kind by comparison.

But it's small-room kindness. He smiles, he jokes, he hugs Michelle Obama, he talks loftily about how American should be a bastion of human rights. In a world obsessed with what things look like rather than how things are, it's enough to make too many people forget that Bush's hands are wet with blood.

Jameela Jamil, star of Netflix's The Good Place, tried to justify her initial support for Ellen by saying that she was ignorant of Bush's legacy. He was on "the other side of the world" and British kids "weren't taught about him in school." Hands up if you were 10 years old in 2003 and knew that the Iraq War was bad.

She even noted that they were dealing with their own "nightmare of a Prime Minister" at the time, which is especially mystifying, since Tony Blair is largely thought of as a nightmare precisely because of his support for Bush's war.

It was yet another moment where a celebrity would have been better off thinking rather than talking. Thinking about dead bodies in the dirt, planes reducing entire cities to rubble, and the legacy of devastation that has followed the decisions of Western leaders. 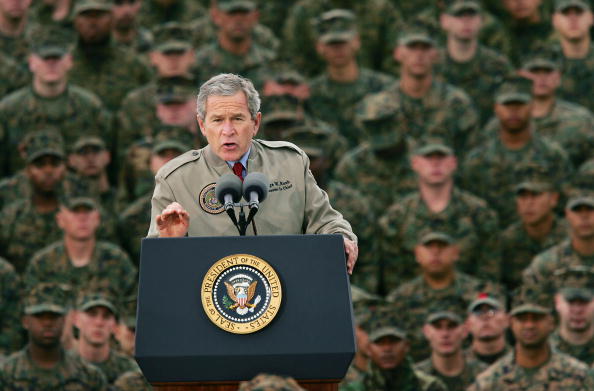 Jamil has now revised her support for Ellen, and has called Bush "heinous," but her intervention - along with all the others - is a painful reminder that wealthy celebrities are not playing the same ballgame as the people who genuinely feel the effects of the decisions made by people like George W. Bush.

Celebrities will not save us. Well-intentioned though they may be, they will still pal around with Sean Spicer backstage at the Emmys or samba with him on Dancing With The Stars. Trevor Noah and the gang will still make fun of a politician's hands before they actually address the substantive problems that cause poverty, and war, and death.

They'll make it up as they go along, and they will rally around one another hard when the public at large holds them to account. Even now, Ellen's video where she hammers home her friendship with George W. Bush has over 100,000 retweets. A masterwork in diplomacy.

In the speech, Ellen hangs her hat on one tweet that read "Ellen and George Bush makes me have faith in America again."

On the surface, it's a message of kindness and conciliation. But as one plumbs its depths, it's a murky, swampy sentiment. One that says no matter how many people we kill elsewhere, the smiley faces of the rich people on my TV will make everything alright.

Lexus teases its EV concept ahead of the Tokyo...

7 Genies creates an investment arm for companies using its...