Notes On The Season: Telluride Fest Parties Like It’s 2019; Emmy Voters Pick And Choose; How Showtime Hopes Donald Trump Will Deliver The Gold

A column chronicling events and conversations on the awards circuit.

If you need a clue that the movie awards season is gearing up to return to normal, look no further than last night’s gathering of the Telluride Film Festival faithful on the London Hotel Rooftop overlooking the Sunset Strip. The fest always throws a west coast reception in mid-June to kick things off and whet Hollywood appetites for their annual Labor Day weekend fest which as part of the normal Fall trifecta that also includes Venice and Toronto is the official start of Oscar season and a place to be if you want to be recognized as an early contender for all those movie awards to come in the next seven months, down from eight last year but still up from the usual pre-Covid six. Yes we know Emmy nominations balloting just started yesterday as well, but the TV and Movie awards calendars are so blurred now it really has become just one big giant campaign opportunity. Rest assured we can handle both here at Notes on the Season and we will. Of course the Coronavirus pandemic has helped muddy the waters and the festival was cancelled for the first time in its nearly half century history last year (as obviously was this London Hotel outdoor soiree) but if turnout of the T-Ride regulars, studio publicists, and others is any indication this cocktail reception means it looks to be back to business as normal, and with California eliminating social distancing and mask requirements this week it was tough to find a mask anywhere in this crowd which was clearly happy to see old friends and to start speculating on what will be hitting the Rockies come September 2nd (one day longer than usual). 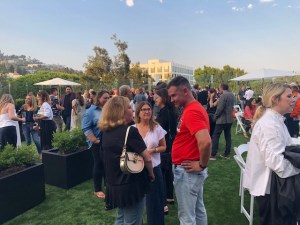 You can usually make educated guesses on which awards contenders will show in Colorado by the presence of certain studio consultants and executives at this particular event. Telluride famously doesn’t reveal any of its titles until the charter plane takes off, but I have reliably heard Netflix, of course still not going to Cannes next month, will have at least four films at T-Ride if things work out. I am told Warner Bros, which just announced Denis Villeneuve’s Dune for Venice, is possibly going to have a film hit Telluride as well, likely one of their awaited Fall titles like David Chase’s Sopranos prequel The Many Saints Of Newark, Clint Eastwood’s Cry Macho, or even November title King Richard with Will Smith. Want to take a guess? There was a strong Searchlight contingent spotted and they are usually good for one or two movies. Whether Cannes entry Wes Anderson’s The French Dispatch is one of them is unknown (it has also been announced for NYFF), but September release The Eyes of Tammy Faye with Jessica Chastain and Andrew Garfield makes sense. Amazon was out in force last night as well, so expect some goodies from them. At this point it is all speculation, but I do hear the Academy of Motion Picture Arts & Sciences may also be plotting a return of their annual festival cocktail reception. Hope so. 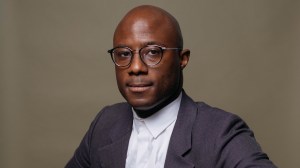 One person going for sure is Oscar winner Barry Jenkins who has been a Telluride regular since he was a college student in 2002, working various jobs for the fest and programming the shorts program among other things. This year he was announced yesterday as the Guest Director and will be curating a selection of films for that very prestigious annual position. He was also the guest of honor at last night’s reception and after congratulating him on his monumental must-see Emmy-contending 10 part Amazon Limited Series The Underground Railroad, I had to ask what movies he may be programming, but as a veteran of T-Ride’s secrecy he didn’t give a hint. “If I told you I would have to….,” he started to say but I finished the sentence for him. As for coming back this year to the festival where his Oscar winning Best Picture Moonlight premiered, he said he would not have missed it and would be there regardless. Of course. That goes for me too and my pass rolled over from last year. Julie Huntsinger who is co-director of the fest along with Tom Luddy was excited to see everyone turn out (The London rooftop is a great Covid-safe location) and told me she won’t be going to Cannes in July. She’s not alone in that but it comes two months later its usual May berth so timing a bigger problem than usual. Huntsinger and Luddy are always very visible there checking out potential films to bring to Telluride. From what I hear T-Ride is having no problems getting an enviable selection of movies to show off without hunting down some of them on the Croisette. People are clearly excited to go back – and get back to this normal. Another year without spending Labor Day weekend on a gondola in Telluride is unthinkable.

But back to the Emmys. Remember them? Voters (I am one of them) are being inundated as never before by a tsunami of content vying for TV’s top prize and the crunch is on now as voting continues through June 28.. Showtime interestingly finds itself campaigning numerous contenders all with a Donald Trump connection. Trump himself famously never won an Emmy for The Apprentice that he claimed he deserved, but Showtime is hoping Emmy voters will respond, especially since none of these shows are not exactly what you would call “flattering” to the former President and Biden election denier. Highly deserving of consideration is Billy Ray’s Limited Series The Comey Rule which chronicles the conflict between former FBI director James Comey and newly elected President Trump. Jeff Daniels as Comedy and Brendan Gleeson as Trump are both deserving of Emmys in this superb adaptation of Comey’s book. Showtime also has Our Cartoon President in the animated series category; Stephen Colbert’s Election Night 2020 in the live Variety Special category; Vice in the Hosted Nonfiction Series or Special race; Docu Kingdom of Silence which deals in part with Trump’s handling of the case of the murdered Washington Post journalist Jamal Khashoggi; and The Circus, the weekly political series which followed his every move on the election trail.

Hoping there is still an appetite for Trump-related material on the part of the liberal leaning entertainment industry Showtime’s EVP Non-Fiction programming Vinnie Malhorta took on the challenge of a very different kind of administration and President to present different facets in unique and provocative and even amusing ways. Was it just a coincidence that so much of Showtime’s programming revolved in one way or another around Trump? 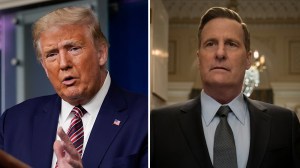 “I think there’s a rhyme and reason to how it happens, right? I think that there’s a general mindset, I would say, at Showtime which is that we really want to be a mirror of our times as storytellers, right? I think why live in the past when the present is as kind of volatile and compelling and groundbreaking as it is?,” he said. “You know, there’s no area of American culture, or there’s no American that has not been affected, touched, or influenced in some manner by Donald Trump in the past six years. Like, it’s impossible to figure out a way that it’s not. I think in the past six years, it’s been either Trumpism or Covid-19, and look, let’s be honest, even those two things are connected in some ways. I think it’s a bit of a perfect storm that they all kind of come together around this time, but I would say that we’ve been documenting Trump’s America in some shape or form for the past, you know, at least 4 or 5 years in comedy, in scripted, in documentary, and I think as a network, I think we feel compelled to go down that road, and also, a lot of the creators, I think, have come in with different vantage points and different areas of exploration of what actually this means to us in real-time.” 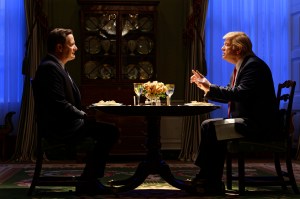 For Malhorta the most overt version of their forays into all things Trump is The Comey Rule, and even some of the precursors that led up to it in both scripted and non-scripted areas. And he is also high on having Colbert as a voice to be heard on election night and in animated form with Our Cartoon President. “With Stephen, obviously, his approach is very different than Billy Ray’s approach, which is very different than The Circus host’s or Vice’s approach, and I think that Stephen has become an incredibly important voice in our culture over the past decade, so much of the steam that needs to be let out of that kettle is coming from people like Stephen and other people in the world of late night. But I think even with Stephen, you see how he approached it in two different forms, whether it’s The Cartoon President or it’s his election night specials, right? Maybe tonally they’re the same, but genre-wise and stylistically, obviously, they’re quite different,” he said. 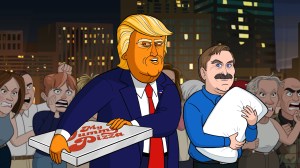 Malhorta thinks there is still a very big well of material relating to Trump and Trumpism than can last well beyond this year. He says it is really diagnosing our trauma as a country, and there will be an aftermath. One of those projects currently being discussed is Ray’s look at the January 6th Capitol Riots insurrection through the lens of six different participants. Ray is currently researching it and hopes to get a final green light from Showtime. “I believe that just because Trump is no longer the president, it doesn’t mean that Trumpism died with the presidency. You know what I mean? And so, when you look at Billy’s exploration of the Capitol riot, there are also other things that we have currently in edit or in production that I think will also look into that. 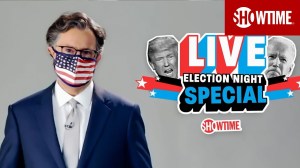 We’ve got a documentary project that is so deep inside these very important elements of the Republican party that I think it’s going to show the aftermath of Trumpism is that it’s still impacting and unraveling a political party that is struggling to figure out its identity, as even today, we watch it play out in cable news between Liz Cheney and McCarthy, and the rest of the Republican party, talks about them fracturing. So, you know, I think that we’re going to continue to see it,” he said. “I think these past few years are going to have a very long-lasting effect, which should continue to permeate in our content, our culture. I think that where there are other maybe platforms our competitors like to stay away politics or some of the more difficult subject matter, you know, Showtime has always had a little bit of a tendency to kind of step right into the fire and take those on, and I think that has a lot to do with cultural relevance, and again, that’s kind of trying to be a mirror of our times.”

Nightlife vet Steve Lewis back in the DJ booth...