He's got a super shady past.

Pamela Anderson, 52, is a married woman (again) following her secret wedding to Jon Peters, 72, the controversial former hairdresser-turner-producer of both the 1976 and 2018 versions of "A Star Is Born".

In a surprise announcement on Twitter, the former Baywatch babe and Playboy playmate turned avid animal rights activist and defender of WikiLeaks Julian Assange shared that she'd tied the knot for her fifth time — and their marriage is taking the internet by storm.

This isn't the first time Pamela Anderson has kept a relationship or marriage a secret from the public.

Here's a look at what we know about Pamela Anderson's new husband Jon Peters, including the first photo of them as a married couple.

Born in Van Nuys, CA, in 1945, Peters got his start as a hairdresser to the stars in Beverly Hills. The womanizing playboy hairdresser played by Warren Beatty in the 1975 film "Shampoo" is said to be based on Peters himself. It just so happens Peters met client-turned-girlfriend Barbra Streisand when he was creating her wig for the 1973 film "For Pete's Sake." Though he was married to actress Lesley Ann Warren at the time, their affair grew into a powerful Hollywood partnership.

Along with producing her 1976 remake of the 1937 film "A Star Is Born", Peters worked with Streisand on several albums and movies before they broke up in 1985. They have remained close since, and speaking with Vanity Fair in a 2017 article in which he referred to himself as "the Trump of Hollywood", he said of Streisand, "She was probably the love of my life."

From 1989-1991, he and then-partner Peter Guber — with whom he produced several icon films, including "Flashdance", "The Witches of Eastwick", "Batman" and "Batman Returns" — served as co-chairmen of Sony's Columbia Pictures, now known as simply Sony Pictures, sinking the company $3.2 billion in the red after a series of flops and shady expenditures, including payments for services rendered to infamous Hollywood Madam Heidi Fleiss.

As for those bad things, Jezebel published a searing exposé on Peters just prior to the October 2018 release of the most recent version of "A Star Is Born", detailing the sordid side of a past that includes banishment from the sets of "Man of Steel" and "The Color Purple", as well as five lawsuits filed against him for sexual assault. Four of the five were settled out of court for undisclosed amounts. The fifth went to trial, with a jury awarding his former assistant $3 million in compensatory damages (despite this, is he said to maintain a net worth of approximately $300 million).

Soon after that article's original publication, the Producers' Guild of America (PGA) declared that Peters was not part of the certified producing team on "A Star Is Born", making him ineligible should the film have one the Best Picture Academy Award, despite the fact that it was originally billed as "A Jon Peters/Bill Gerber/Joint Effort Production.”

An official statement from Warner Bros. at the time said only, “Jon Peters’ attachment to this property goes as far back as 1976. Legally, we had to honor the contractual obligation in order to make this film.”

And when asked about Peters involvement during an interview with NPR, director and star Bradley Cooper said the following:

"We had to get his consent in order to make the movie. When you're at the helm, it's a huge responsibility. And I guess — I mean, first of all, on the set ... you have to create an environment where everybody feels safe. Everybody. And there's no room for disrespect, nothing. And that's something that you'd have to ask everybody who was involved, but I feel like that's the environment I created. Luckily, Jon wasn't there. And if I had known all those things, I would have done it differently. And I guess it's ... I wanted to make the movie, I knew I had to get consent from him, otherwise there's no film. But I should have checked. I guess that's the thing.​"

2. Anderson announced their surprise marriage via this throwback image with Peters from 1989.

On January 22, 2020, Anderson posted this image of the couple attending the 1989 premiere of his film "Batman," captioned only with her newly minted name and a heart emoji.

The two first met at Hugh Hefner's legendary Playboy Mansion in the mid-80s, but Peters recalls that when he proposed to her back then, she turned him down because of their 20 year age difference.

3. To date, both Anderson and Peters have shared only a few minor details about their relationship and wedding

The couple told The Hollywood Reporter they were married in a small private ceremony in Malibu, CA on January 20, 2020, with Peters offering a brief statement and Anderson sharing a poem.

"Pamela has never seen her full potential as an artist. She has yet to shine in a real way. There is much more to her than meets the eye, or I wouldn’t love her so much ... There are beautiful girls everywhere. I could have my pick, but — for 35 years — I’ve only wanted Pamela. She makes me wild — in a good way. She inspires me. I protect her and treat her the way she deserves to be treated.”

“Jon is the original ‘bad boy’ of Hollywood -
no one compares -
I love him deeply like family.
His life used to scare me.
So much for a girl like me.
Now I’ve seen more of life
and realize ..
He’s been there all along.
Never failed me -
I’m ready now
and
he’s ready too -
We
understand
and respect each other -
We love each other
without conditions. -
I’m a lucky woman. -
Proof
God has a plan”

4. Anderson finally shared a photo of herself and her new husband on Instagram

This black and white image uploaded to her Instagram stories on January 24 shows the two looking cozy in winter wear below what appears to say Wetzlar, Germany. 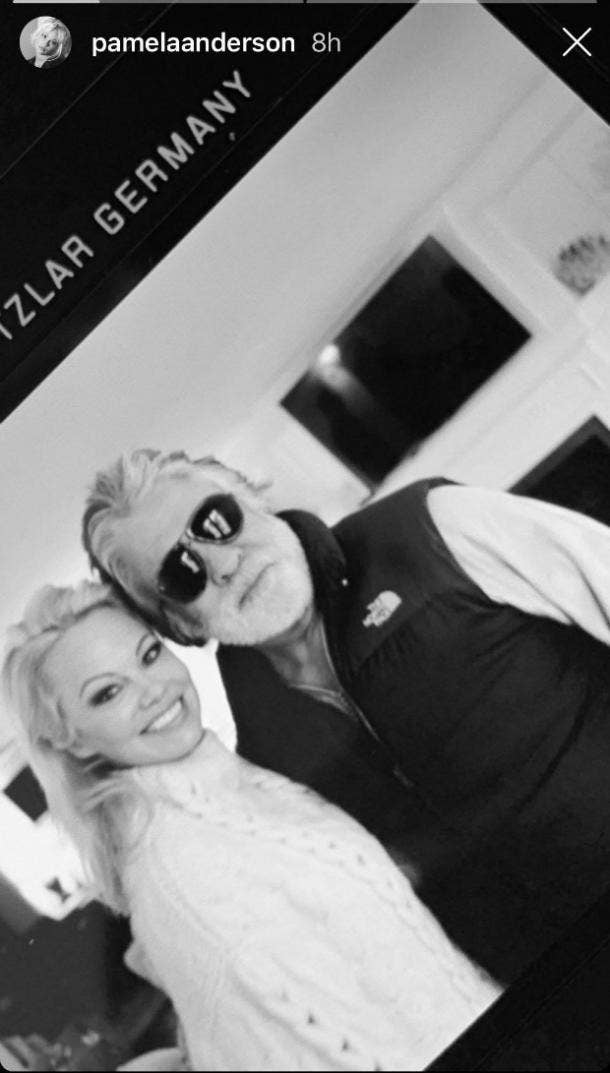 5. This is the fifth marriage for both Anderson and Peters.

And like her new husband, Anderson has also been married four times, although only to three men:

6. Anderson's oldest son Brandon is happy for his mother.

While their marriage took many by surprise, Anderson's son Brandon, for one, seems pleased with his mom's new relationship status

"I’m incredibly happy for my mom and Jon," Brandon said. "They’ve known each other for over 35 years and I wish them luck in this next chapter of their lives together. I will support the happy couple however I can and I’m excited to get to know Jon’s family even better."

Bernadette Giacomazzo is an editor, writer, publicist, and photographer whose work has appeared in Teen Vogue, People, Us Weekly, The Source, XXL, HipHopDX, The Los Angeles Times, The New York Post, BET.com, and more.

2 John Cleese in Twitter hot seat after joking about...

5 ‘Tamron Hall’ To Return to Television With...

8 How The Saturn-Mars Conjunction Will Affect Your Love...

9 Coronavirus: What's happening in Canada and around the...

10 'Kind Words' is the rare social network where everyone is...