Pandemic slowed U.S. immigration to a trickle before Trump ordered a freeze

As he often does, President Donald Trump made a headline-grabbing announcement on social media last month: he would freeze immigration to the United States to protect the health and jobs of Americans during the COVID-19 pandemic.

What wasn't known at the time was the extent to which immigration to the U.S. had already largely collapsed.

Newly published statistics from the State Department reveal that the processing of new U.S. immigration visas had decreased dramatically in the weeks leading up to Trump signing his executive order on April 22.

He first announced the policy on Twitter in a post that generated more than half a million retweets, likes and comments, along with many news stories.

In light of the attack from the Invisible Enemy, as well as the need to protect the jobs of our GREAT American Citizens, I will be signing an Executive Order to temporarily suspend immigration into the United States!—@realDonaldTrump

Less discussed at the time was whether the U.S. was even processing visa applications amid disruptions to travel and the shuttering of a variety of business and services because of the health crisis — including U.S. immigration services. 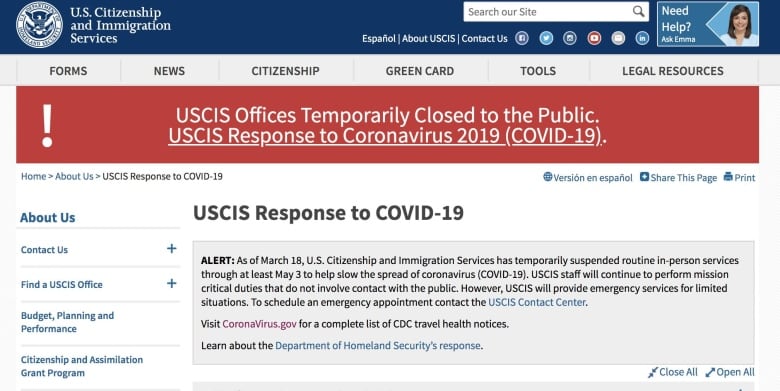 Immigration offices in the U.S. were already closed, shuttered by the pandemic, a month before the executive order. (U.S. Citizenship and Immigration Services)

The State Department figures show that 95 per cent fewer immigrant visas were processed in the U.S. for the entire month of April compared to February, the month before the World Health Organization declared the novel coronavirus a global pandemic.

Five Canadians are recorded as immigrating to the U.S. in April.

Similar decrease for work visas not included in freeze

The uncertain effect of Trump's order is underscored by what happened to non-immigrant work visas — these visas were not subjected to the president's new policy.

Yet the newly released statistics show the numbers for non-immigrant work visas collapsed in a similar way to the immigrant visas that Trump's order targeted.

At the time Trump made his announcement, even some of his high-profile supporters, such as Fox News host Tucker Carlson, questioned whether the announcement was more for political show than for actual real-world impact.

Still, the long-term effects can't yet be gauged.

Trump himself has said his policy might evolve. The current executive order lasts for 60 days, meaning until late June, and Trump has said he'll consider whether to prolong it or extend it to new visa categories.

When asked about the figures, a U.S. State Department official said Thursday that, in response to the pandemic, the department had cancelled all routine immigrant and non-immigrant visa appointments as of March 20.

Services are still being offered for some visa cases deemed emergencies.

There's no date set for when broader services will be restored.

9 Healthcare Professional Gets Yelled At In A Gas Station...