People keep confusing this guy on Twitter with Rep. Matt Gaetz and he's handling it brilliantly 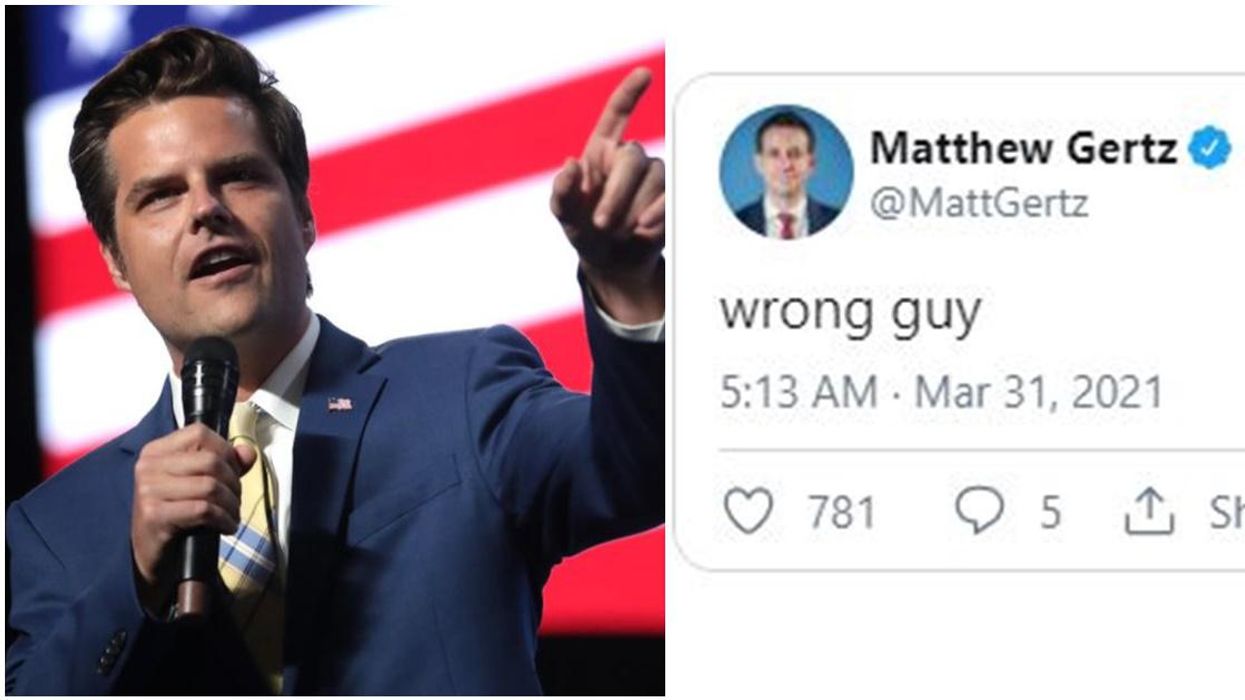 The Matt Gaetz sex-trafficking allegations have become the biggest political scandal since Donald Trump left office. The Republican congressman from Florida is being investigated by the Justice Department for having an alleged "sexual relationship with a 17-year-old and paid for her to travel with him."

Gaetz is known as one of Donald Trump's most fervent supporters and was among the Republican Congressman who fanned the conspiracy flames that many say led directly to the Capitol riot on January 6.

The intrigue around the scandal known as "Gaetzgate'' shows no signs of slowing, and there's one innocent bystander who will have no peace until it does, Matt Gertz of Media Matters.

Gertz is a senior fellow at the nonprofit "progressive research and information center dedicated to comprehensively monitoring, analyzing, and correcting conservative misinformation in the U.S. media."

His main beat is Fox News, who he takes to task on the Media Matters website as well as his Twitter feed.

So for two men involved in politics, there could be few who are less alike. However, Gaetz and Gertz are forever linked on Twitter because their names are only off by a letter. So, Gertz is constantly getting vitriol for Gaetz's alleged behavior.

It's hard to say whether it's a spelling error that turns Gaetz to Gertz on Twitter or the fact that some people may think that Gaetz's name is Gertz. But Twitter is a pretty confusing place in general.

For the most part, Gertz takes the Gaetz mix-up with the appropriate grain of salt and even finds it pretty funny. But it still seems pretty exhausting to get yelled at all day for something you didn't do. Especially when we're talking about a major offense, as opposed to say, unpaid parking tickets.

One of the "best" mix-ups came last summer when a filmmaker named Morgan J. Freeman — no, not the one you're thinking of — came after Gertz.

This Morgan Freeman is known for producing the hit MTV reality show "Teen Mom" and the spinoffs, "Teen Mom 2," and "16 and Pregnant."

Gertz thought the guy who probably has the same problem as him lighting him up was pretty funny.

Freeman clearly understood the error and apologized to Gertz. "Truly sorry I accidentally tagged @MattGertz instead of @mattgaetz but let's harness this great energy and take down the evil Mini-Trump GAETZ now!!!" he responded.

Recently, Gertz has received flack because Gaetz is potentially leaving office to take up a job at the ultra-right-wing TV network Newsmax.

Others have warned Gertz that the "weasels are closing in" on him.

According to MSNBC, Matt Gertz did something so bad that not even Donald Trump will defend him.

"Even Donald Trump is not defending Matt Gertz right now" is a thing that was just said on MSNBC because apparently… https://t.co/GSLwkRvTjo
— Matthew Gertz (@Matthew Gertz)1617664355.0

One Twitter user took a screenshot of the countless times Gertz is forced to say "wrong guy" every day.

On Tuesday, the "Morgan Freeman" problem popped up again. A man with the name Ray Donovan, just like the TV show starring Liev Schreiber, mistook Getz for Gaetz and hilarity ensued.

The good news for Gertz is that he's gaining some positive attention for the fun he's having with Gaetzgate. He says he's gained over 50,000 followers on Twitter since the allegations first dropped. He's sure to have tens of thousands more by the time Gaetzgate is settled.

Common Documents Needed When Applying for a Loan