Body camera footage made public from two Minneapolis police officers involved in George Floyd's arrest captured a panicked and fearful Floyd pleading with the officers in the minutes before his death, saying "I'm not a bad guy!" as they tried to wrestle him into a squad car.

"I'm not that kind of guy," Floyd says as he struggles against the officers. "I just had COVID, man, I don't want to go back to that." An onlooker pleads with Floyd to stop struggling, saying, "You can't win!" Floyd replies, "I don't want to win!"

A few minutes later, with Floyd now lying face down on the street, the cameras record his fading voice, still occasionally saying, "I can't breathe" before he goes still.

Transcripts of the footage were released earlier this summer, and the video was made available to media organizations and the public on July 15 to view by appointment only.

A coalition of news organizations petitioned the court to allow the body-camera footage to be copied and published to provide a more complete picture of what happened when Floyd was taken into custody.

A Hennepin County judge ruled late Monday that it should be made available to news organizations for publication.

CBC News examines newly available police footage of George Floyd's arrest and the moments that led to his death in the custody of Minneapolis police. Warning: This video contains graphic content. 5:54

The video is the fullest public view yet of Floyd's interaction with the officers who were later charged in his death. It also captures an apparent lack of urgency to render aid to Floyd for long minutes after he stopped moving.

The recordings from Officers Thomas Lane and J. Kueng are part of the criminal case against them and two other officers in Floyd's May 25 death. Derek Chauvin, who held his knee against Floyd's neck for nearly eight minutes, is charged with second-degree murder. Lane, Kueng and another officer, Tou Thao, are charged with aiding and abetting.

All four officers were fired the day after Floyd died.

The footage shows the officers' view of a death already widely seen on a bystander's cellphone video, which set off tumultuous protests in Minneapolis that quickly spread around the world and sparked a national reckoning on race and policing.

Floyd distraught from the start

Floyd appears distraught from the moment officers ask him to step out of his vehicle near a south Minneapolis corner grocery, where he was suspected of passing a counterfeit $20 bill. It takes only 13 seconds from the time Lane taps on Floyd's car window and asks him to show his hands to when Lane pulls his gun, leading Floyd to say he had been shot before.

Floyd's hands are soon handcuffed behind his back, and he grows more anxious, telling the officers that he's claustrophobic and pleading with them not to put him in the back of a squad car.

Pulled by his elbow, Floyd says, "Ow." The other officer asks if he's on something. The first officer says, "Because you're acting real erratic … You've got foam around your mouth." Floyd says, "I'm scared, man."

The officers struggle for several minutes, trying to get Floyd into their police SUV.

As they tell him to "take a seat," he says over and over that he's "not that kind of guy" and insists that he is getting in the SUV. The cops tell him he's not. "I'm going to die, man." Floyd says: "I just had COVID. I don't want to go back to that."

Floyd repeats that he's claustrophobic and has anxiety and says he's scared. An onlooker shouts, "You can't win," and encourages him several times to just get in the car. Floyd says, "I'm not trying to win." He stiffens, and repeats that he's claustrophobic. He asks if he can sit in the front. The officer says he will roll down the windows in the back.

Floyd is then shoved into the back seat and squirms, saying, "I can't breathe ... I had COVID, man … I can't breathe." A struggle breaks out on the other side of the car, as officers attempt to shove him in.

Floyd is eventually pulled out of the SUV and put on the pavement with the officers holding him down. 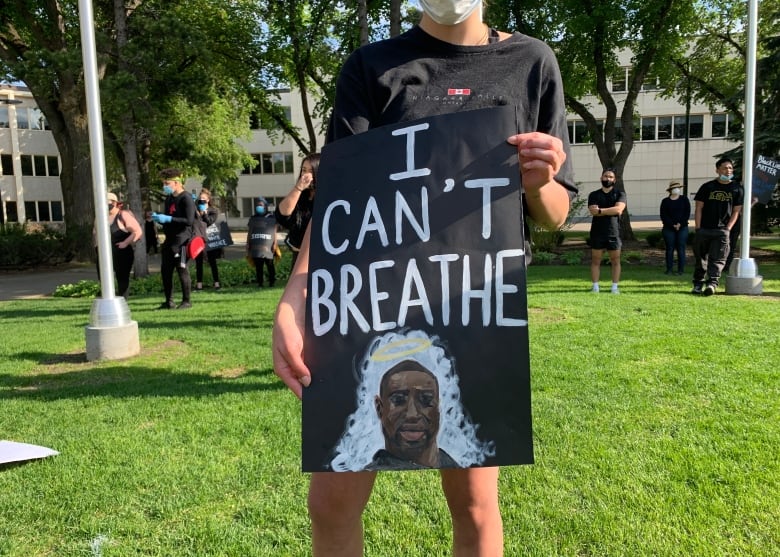 A woman holds a poster commemorating George Floyd at the Fight for Equity rally in Edmonton on June 5, 2020. (CBC/Danielle Kadjo)

Chauvin and Kueng each grip one of Floyd's handcuffed hands to hold them in position behind his back, with Kueng's knee appearing to press on Floyd's bottom or just below. Lane is at Floyd's feet.

He says, "I can't breathe," more than a dozen times when he's on the ground. An officer says, "Relax." Another officer says, "You're doing fine, you're talking fine."

The officers sound clinical as the minutes tick by. "I think he's passing out," one officer says. "You guys all right, though?" someone asks. "Yeah — good so far," says one. Another — apparently Lane — says: "My knee might be a little scratched, but I'll survive." Kueng reaches out with a free hand to pull a pebble from the police SUV's tire tread and tosses it to the street.

Lane did not sound particularly worried the first time he asked Chauvin whether they should roll Floyd on his side and suggested that Floyd might be in delirium. People in the crowd can be heard expressing fear for Floyd's condition, asking whether he had a pulse and was breathing.

A couple of minutes later, Lane sounds a bit more concerned when he asks again about rolling Floyd onto his side. The officers go quiet but show no apparent urgency as Kueng checks for a pulse and says he cannot find one.

'You just killed that man'

Lane's camera shows him following an unresponsive Floyd on a stretcher into an ambulance. An onlooker says, "You just killed that man."

Floyd is in the ambulance for more than one minute before one of the EMTs instructs Lane to start doing CPR. The video shows Lane performing constant chest compressions by hand with no visible results.

The ambulance parks a few blocks away from the store for several minutes while Lane and the EMTs work on Floyd, rather than heading straight to the hospital, even though they all know that Floyd is in full cardiac arrest, as indicated by dispatcher audio. 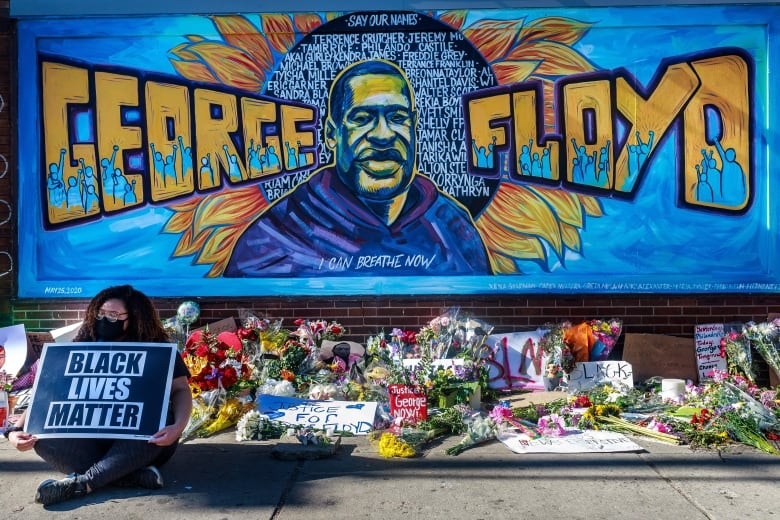 Flowers, signs and balloons are left near a makeshift memorial to George Floyd near the spot where he died while in custody of the Minneapolis police, on May 25, 2020. (Kerem Yucel/AFP/Getty Images)

Christine Hill, a spokesperson for Hennepin County Medical Center, the hospital that provided the ambulance, said she could not talk specifically about Floyd's treatment because of medical privacy restrictions. But she said it is not unusual for paramedics to load a patient into an ambulance and move to a more secure location as they provide life-saving care.

Attorneys for both Lane and Kueng also appealed for the police body cam video to be released to show the "whole picture" of what happened. Earl Gray, who is representing Lane, said the bystander video shows just the last piece of what happened and "is not fair."