Republican politicians are increasingly speaking out this week in effort to persuade people who are skeptical about COVID-19 vaccines to take the shots as a new, more contagious variant sends caseloads soaring.

At recent news conferences and statements, some prominent Republicans have been imploring constituents to lay lingering doubts aside.

In Washington, the so-called Doctors Caucus gathered at the Capitol for an event to combat vaccine hesitancy. And in Florida, Republican Gov. Ron DeSantis this week pointed to data showing the vast majority of hospitalized COVID-19 patients hadn't received shots.

"These vaccines are saving lives," said DeSantis. His statement was a contrast to messaging from his campaign team — he's considered a 2024 presidential candidate — which is selling campaign merchandise mocking masks and medical experts, including the nation's top infectious-disease expert, Dr. Anthony Fauci.

In Congress, Louisiana Rep. Steve Scalise, the House Republican whip, recently distributed pictures of himself receiving his first dose of the vaccine. Senate Republican leader Mitch McConnell — a childhood polio survivor who has consistently advocated on behalf of the COVID-19 shots — urged the unvaccinated to ignore "all these other voices that are giving demonstrably bad advice." 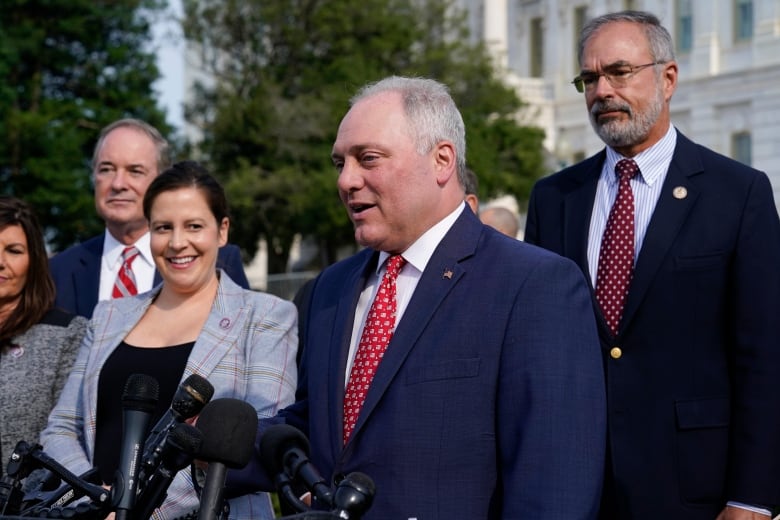 House Minority Whip Steve Scalise is shown Thursday at a news conference outside the Capitol in Washington, D.C. The briefing featured a mix of pro-vaccination messaging and attacks on Democrats for not being aggressive enough in pursuing an investigation into the origins of COVID-19. (J. Scott Applewhite/The Associated Press)

For months, many conservative lawmakers and pundits have been stoking vaccine hesitancy, refusing to take the shots or downplaying the severity of the virus, following the lead of former president Donald Trump. Republican governors have signed bills protecting the unvaccinated from having to disclose their status and tried to roll back mask mandates.

In his focus groups, Luntz said many skeptics have struggled to assess the veracity of the things they read and hear.

"There is so much misinformation out there, and they can't tell the difference between what is accurate and what is fake," he said. "So it makes it virtually impossible to communicate when they don't know what to believe."

U.S. officials say misinformation has plagued the COVID-19 vaccine rollout, and case counts across the country are rising. 2:02

The outreach comes as COVID-19 cases have nearly tripled in the U.S. over the last two weeks, with hospitalizations up 32 per cent since last week, according to the Centers for Disease Control (CDC). Public health officials cite the new delta variant, especially in pockets of the country where vaccination rates are low.

Just 56.2 per cent of Americans have received at least one vaccine dose, according to the CDC.

Overall, only 51 per cent of Republicans said in mid-June that they had received at least one vaccine dose, versus 83 per cent of Democrats, according to an AP-NORC poll. And 53 per cent who identify as Republicans and hadn't been vaccinated said they definitely wouldn't get the shots.

Some rates pick up, but mixed messaging abounds

While there's been a detectable change this week, the messaging has been far from uniform. On Fox News, host Sean Hannity implored his viewers to "please take COVID seriously," saying, "enough people have died." But for every Hannity there is an influential online presence like Charlie Kirk, the founder of Turning Point USA, who suggested without evidence on his podcast that up to 1.2 million could have died after getting the COVID-19 vaccine.

A news conference convened by House Republican leaders on Thursday highlighted Republicans' competing messages on the virus, allowing large airtime for attacks on Democrats, including House Speaker Nancy Pelosi and Biden's administration, for not doing more to investigate whether COVID-19 arose due to a lab accident in China. 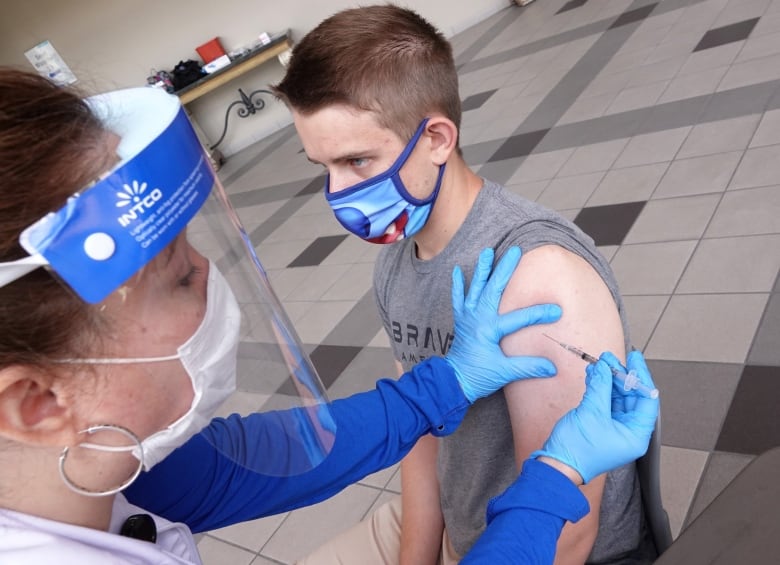 Student Jack Herrington receives a dose of a COVID-19 vaccine on the campus of the University of Memphis in Memphis, Tenn., on Thursday. Tennessee, a Republican-led state, is in the bottom 10 of U.S. states in terms of vaccination rate. (Karen Pulfer Focht/Reuters)

"Even conservative leaders now are having a hard time figuring out how to rein in what had primarily been a propaganda campaign, and they are now realizing their constituencies are particularly vulnerable," he said.

While some Republicans may be using strong words to promote the vaccine, few are proposing new measures to urge vaccination, such as incentives, public information campaigns or more aggressive outreach.

"If someone hasn't been vaccinated at this point, they've made that conscious decision not to," New Hampshire Republican Gov. Chris Sununu said on Thursday. "The government's job is to provide that open door. If you want the vaccine, here it is, nice and easy."

Alabama Gov. Kay Ivey was more blunt Thursday, a day she said she would not mandate masks for the upcoming academic year, leaving the decision up to school districts.

"I've done all I know how to do," said Ivey. "I can encourage you to do something, but I can't make you take care of yourself."

All about Scheana Shay’s nearly 13-carat...

Latest big data developments in the realm of...