“It’s hard for me to even make a Top 10 list,” said legendary lensman Bob Gruen, 75, who releases his memoir “Right Place, Right Time: The Life of a Rock & Roll Photographer,” Tuesday. “When you hang out with John Lennon or [the Clash’s] Joe Strummer or [the New York Dolls’] David Johansen or Debbie Harry or Tina Turner, who’s the No. 1? I have had some very exciting times with some very exciting people.”

But the longtime Greenwich Village resident — who reveals the stories behind his iconic images with help from writer Dave Thompson — told The Post that he never put his starry subjects on a “pedestal,” in turn putting them at ease. And he bonded with them when the camera wasn’t clicking.

“It’s about capturing those moments and not capturing them, to be able to share times when you don’t take pictures,” he said. “When you develop a trust and a friendship, then when you are taking pictures you’re in a much more comfortable situation.”

Although Gruen has published “about 15” photo books, his latest tome is very different.

“This is not a photo book — it’s a word book,” he said. “The whole point is to read the stories.”

Here, he shares what went into some of his classic shots. 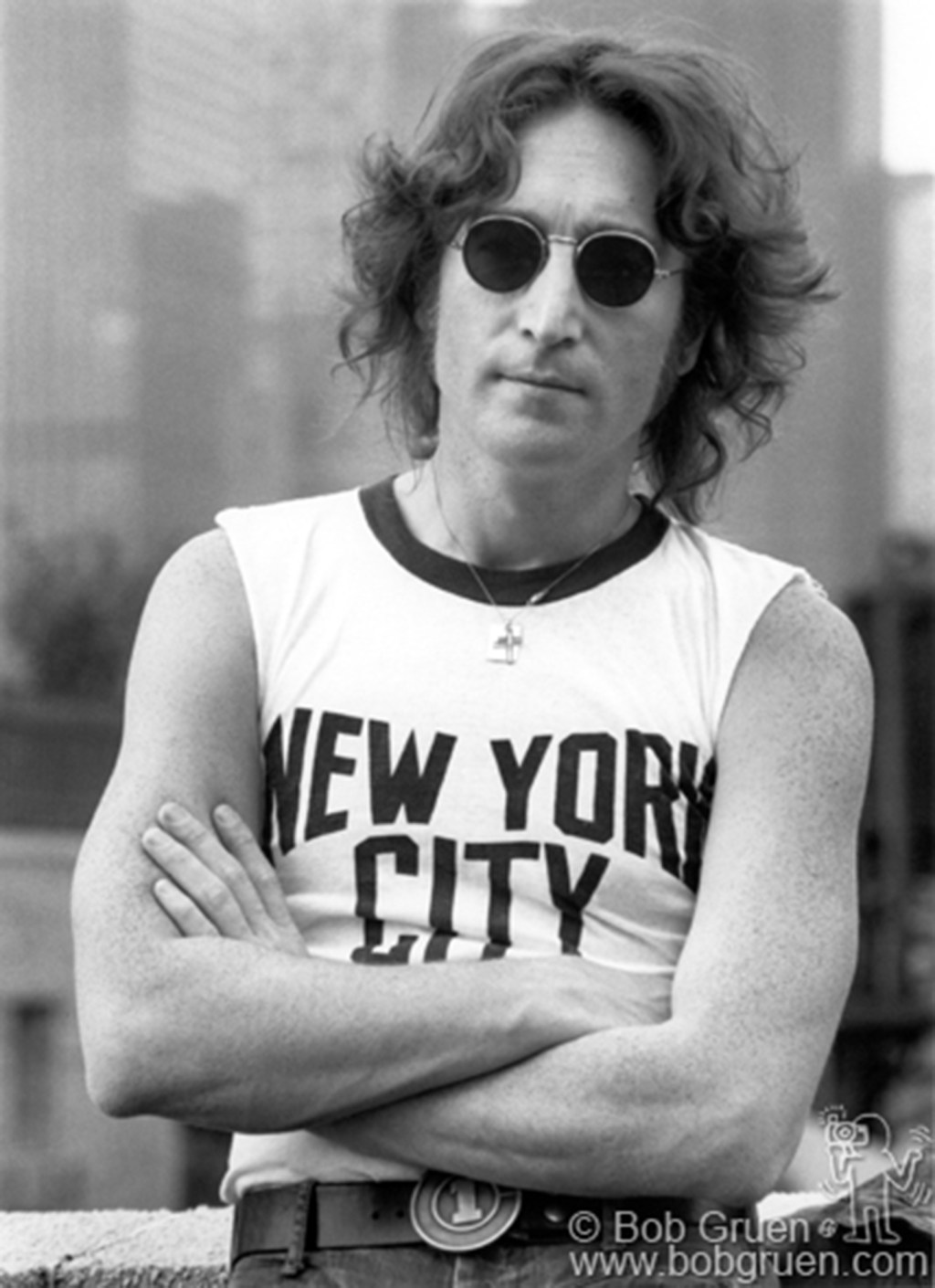 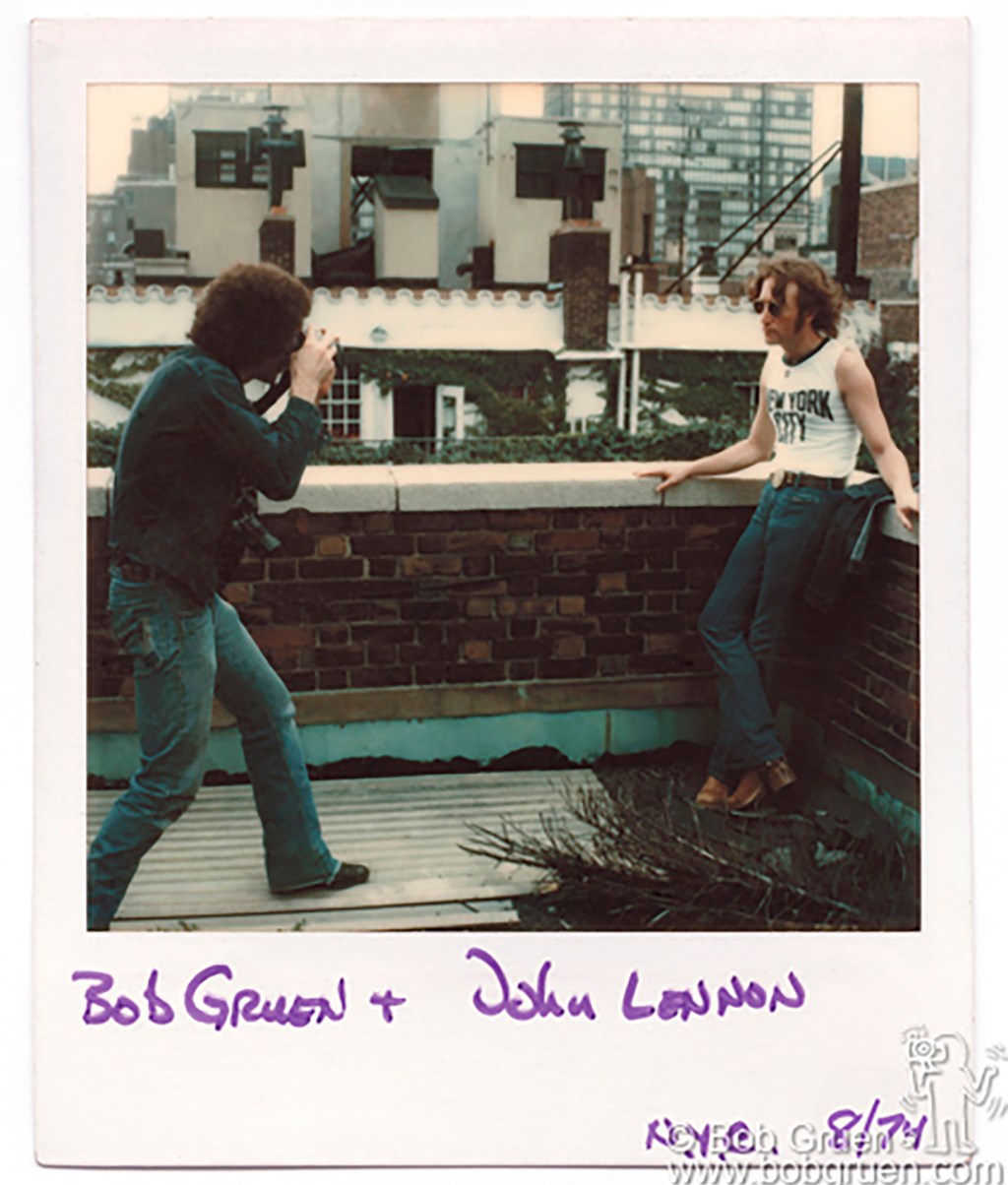 Polaroid of Bob Gruen taking photo of John Lennon in 1974. 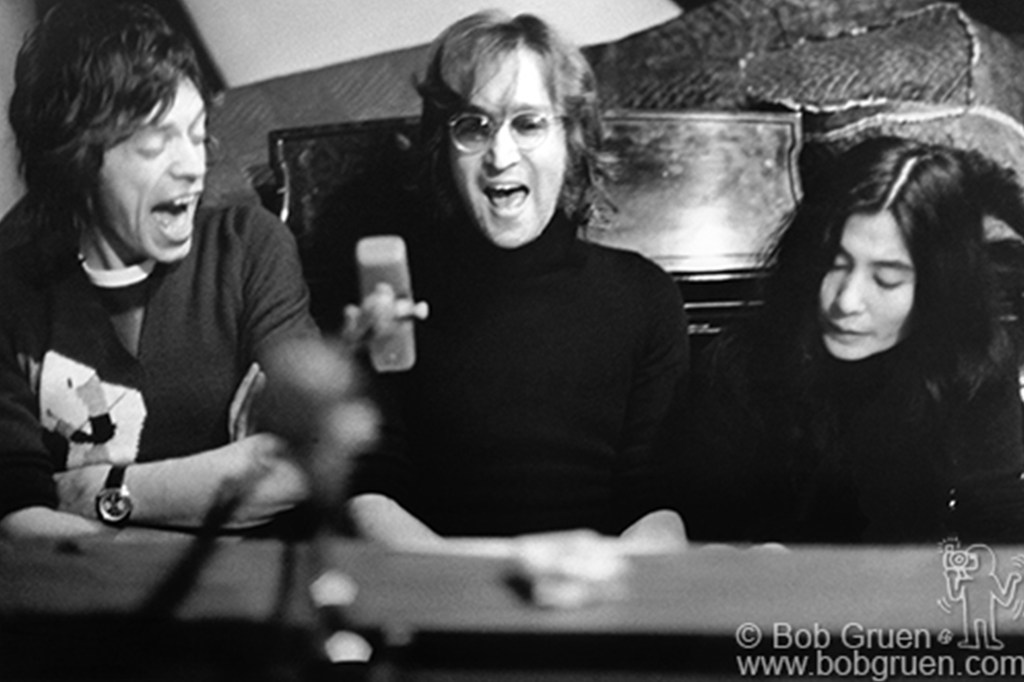 Mick Jagger of The Rolling Stones, John Lennon and Yoko Ono singing at a piano at The Record Plant in NYC in October 1972.

Borrowing a line from “The Godfather,” Dr. Anthony Fauci reacted...

“John was still living separately from Yoko [Ono] at that time in August ’74,” said Gruen, “and he had a penthouse apartment on the East Side of Manhattan. He asked me to take pictures for the album cover of ‘Walls and Bridges,’ and when we were done that, he said, ‘Well, let’s take some more pictures for publicity.’ And I had given him that shirt a year earlier — a couple of guys used to sell them on blankets in Times Square, and I cut the sleeves off with my buck knife. So I said, ‘Do you still have that New York City T-shirt I gave you? ’Cause it would look great with the skyline behind us.’ And in spite of his travels and adventures, he knew right where the shirt was, and he went and put it on. We had no idea at the time that that would become the most iconic picture of him.”

“That was on a plane called the Enterprise Starship 1 — it was a very fancy, private 727,” said Gruen. “A number of different bands rented the plane, and Elton John had it for the month. And Stevie Wonder was coming to a concert in Boston to see Elton, so his publicist invited him to come on the plane but didn’t tell Elton. So when we got there, Stevie Wonder was actually in one of the bedrooms in the back, and Elton didn’t know that he was on the plane. And when we took off, Elton just wanted to take a nap before the show, and the publicist wouldn’t let him. She told him that the plane company had hired a piano player and that Elton just had to come back and see the piano player. Finally, he walks back, and Stevie Wonder was playing ‘Crocodile Rock.’ ”

“I spent the whole afternoon with Tina — there’s another picture [in the book] where she’s like a soccer mom bringing her kids to practice,” said Gruen, who first met Ike and Tina Turner in 1970 in New York. “But I love the one in the grocery store because it shows Tina Turner, at the height of her fame, was a normal mom going out to get lots of bread for lots of peanut butter sandwiches. And literally as she was paying the bill, I took a profile picture of Tina, which ended up being the cover of [1971’s] ‘ ’Nuff Said.’” It was the first time Gruen landed an album cover shot.

After being flown out to Los Angeles by Ike, Gruen got intimate access to experience a “typical day” with the Acid Queen.

Johnny Rotten and Sid Vicious of The Sex Pistols on plane with an unknown little girl, flying from London to Brussels in November 1977.Bob Gruen

“Malcolm McLaren invited me to come to a Radio Luxembourg interview with the Sex Pistols, and we left London around 8 o’clock in the morning and barely made the plane,” said Gruen. “Soon as we got on the plane, they started drinking. And I was sitting across the aisle from them, and I was taking some pictures of Johnny [Rotten] and Sid [Vicious]. Then, I noticed the little girl in front, and I backed up a little bit to get the picture of her all wide-eyed in wonder. And to me that picture is kind of like, ‘Yes, there is a monster under your bed.’ ”

So who was his unwitting little subject? “We have no idea,” said Gruen. “We’ve never heard from her. She’s probably about 50 years old now.”

Gruen’s work was honored with a retrospective collage — designed to look like a teenager’s poster-plastered bedroom wall — at the Museum of Modern Art in 2009.

“All the pictures on the wall are my pictures published in magazines, posters, album covers and so on,” he said. But how does the photographer like being on the other side of the camera, getting his own picture taken?

“It’s kinda weird, although I’m starting to get used to it because it’s happening more and more,” he said. “It’s kind of a vindication of my lifestyle that people view what I did as a success.”

Robert Redford’s ‘grief is immeasurable’ after...

8 The Gossip Girl Reboot Is a Fashion Lover’s...

9 A Woman Fat-Shamed Me On The Subway And I Actually Fought...