A rocket fired from a drone targeted the home of populist Shia cleric Muqtada al-Sadr in the southern Iraqi city of Najaf on Saturday, lawmakers from his Saeroon party said, following one of the bloodiest nights in recent weeks in Baghdad.

The drone attack, which caused little damage and left no casualties, followed a deadly attack by armed men near Baghdad's main protest site on Friday night, which left at least 23 dead, police and medical sources said.

Nearly 130 others were wounded by gunfire and stabbings targeting anti-government protesters at the Sinak bridge near Tahrir Square, the sources said. The death toll includes three members of the police.

Thousands of Iraqis have occupied the central square and three nearby bridges which lead to the city's Green Zone, Iraq's political centre, for more than two months, calling for a complete uprooting of the political system.

Sadr, a mercurial figure who has supported the protests but not thrown his full weight behind them, was in Iran at the time of the drone attack on his home in Najaf, a source in his office said.

However, a spokesperson for his party said the incidents were aimed at pressuring both protesters and political leaders to accept whichever candidate is nominated for the premiership by the ruling elite. 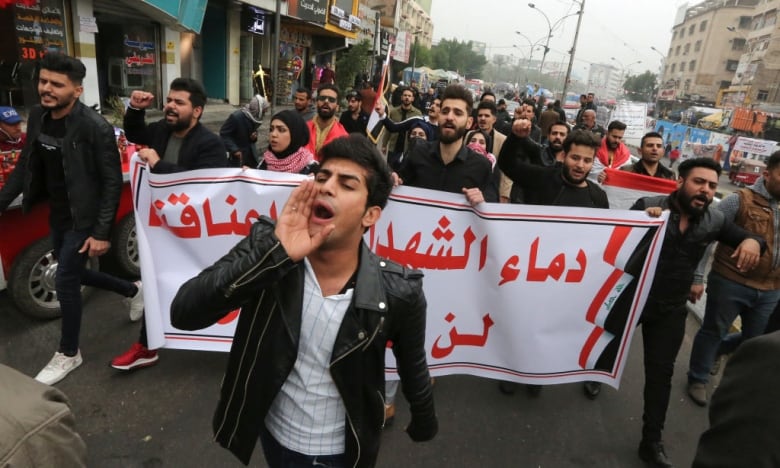 Protesters carry a banner which reads 'The blood of martyrs is entrusted to us, it will not be in vain' during a march in Tahrir Square in the capital Baghdad on Saturday. (Sabah Arar/AFP via Getty Images)

"The Sinak massacre and the bombing of [Sadr's home] is geared at pushing the acceptance of the candidate for prime minister," said Jaafar Al-Mousawi.

Soleimani was reported to be in Baghdad this week, negotiating with political leaders for a new consensus candidate for prime minister.

The weekend's developments marked a drastic escalation to quell the demonstrations, the country's largest in decades. More than 430 people have been killed since protests began on Oct. 1.

Security sources said they could not identify the gunmen who attacked protesters on Friday night. 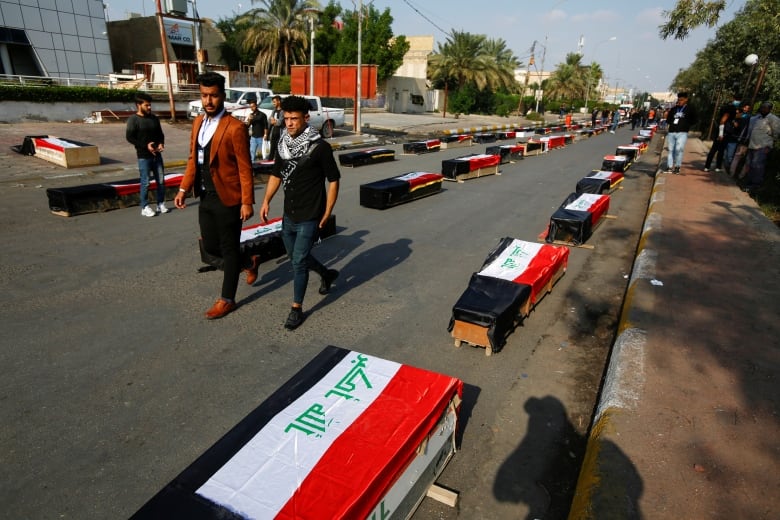 Demonstrators arrange mock coffins in Nassiriya, Iraq, on Dec. 4 to represent people who have been killed during the anti-government protests. (Alaa al-Marjani/Reuters)

The incident was followed by further intimidation early on Saturday morning, as more unknown gunmen drove in a convoy down the main riverside street which leads to Tahrir Square, firing a volley of shots toward it.

The heavily armed, masked gunmen roamed the street near Tahrir Square and attempted to advance onto it but were eventually turned around at a checkpoint manned by Iraq's security forces, witnesses said.

Friday's deadly attack came hours after Washington imposed sanctions on three Iranian-backed Iraqi paramilitary leaders whom it accused of directing the killing of Iraqi protesters. A senior U.S. Treasury official suggested the sanctions were timed to distance those figures from any role in forming a new government.

Western diplomats condemned the attack on protesters, urging Iraqi authorities to investigate whoever is responsible.

The government has said it would investigate and try those responsible for the violence, but there has been little evidence of real accountability, partly due to the complexity of Iraq's varied security apparatus.

Cardi B gets lap dances, makes it rain in...

Who Is Mark Dyer? New Details About Man Prince Harry Selected To Be The Godfather Of Megan Markle's Baby

4 All The Horrifying Details Around OTF Dede's Alleged...

5 Luca Guadagnino On How Intimate Sundance Doc ‘The Truffle...

9 Artist Calls Out Aaron Carter For Ripping Off His Artwork...