Search for bodies concludes at site of Florida condo collapse

Firefighters on Friday declared the end of their search for bodies at the site of a collapsed Florida condo building, concluding a month of painstaking work removing layers of dangerous debris that were once piled several storeys.

The June 24 collapse at the oceanside Champlain Towers South condo killed 97 people, with at least one more missing person yet to be identified. Among the dead are four Canadians.

The site has been mostly swept flat and the rubble moved to a Miami warehouse. Although forensic scientists are still examining the debris at the warehouse, there are no more bodies to be found where the building once stood.

Except during the early hours after the collapse, survivors never emerged from the rubble.

Search teams spent weeks battling the hazards at the site, including an unstable portion of the building, a recurring fire and Florida's stifling summer heat and thunderstorms. 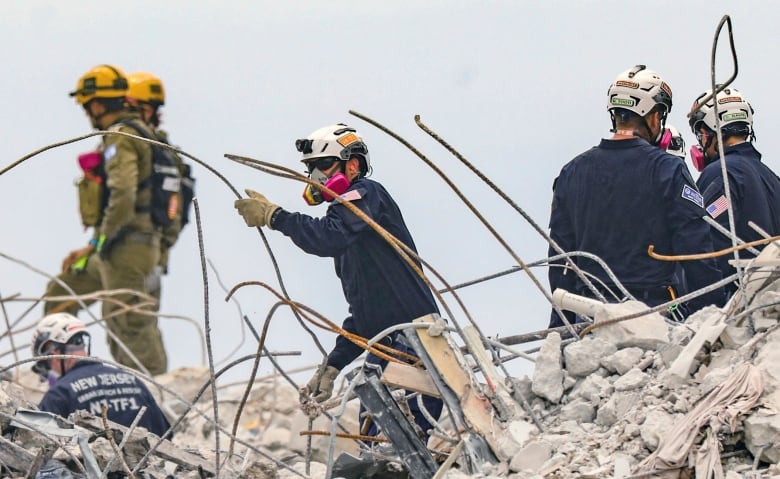 They went through more than 13,000 metric tonnes of broken concrete and rebar, often working boulder by boulder, rock by rock, before finally declaring the mission complete.

Miami-Dade Fire Rescue's urban search-and-rescue team pulled away from the site Friday in a convoy of fire trucks and other vehicles, slowly driving to their headquarters for a news conference to announce that the search was officially over.

At a ceremony, Fire Chief Alan Cominsky saluted the firefighters who worked 12-hour shifts while camping out at the site.

"I couldn't be prouder of the men and women that represent Miami-Dade Fire Rescue."

After a month-long deployment taking part in search, rescue & recovery efforts at the #SurfsideBuildingCollapse, #MDFR #FLTF1 received a warm welcome from loved ones at HQ. We’re proud & thankful for our task force team & their tireless work in bringing closure for the families. pic.twitter.com/afTYJR9iPW—@MiamiDadeFire

Officials have declined to clarify whether they have one additional set of human remains in hand that pathologists are struggling to identify or whether a search for that final set of remains continues.

If found, Estelle Hedaya would bring the death toll to 98.

Hedaya was an outgoing 54-year-old who loved to travel and was fond of striking up conversations with strangers. Her younger brother, Ikey, has given DNA samples and visited the site twice to see the search efforts for himself. 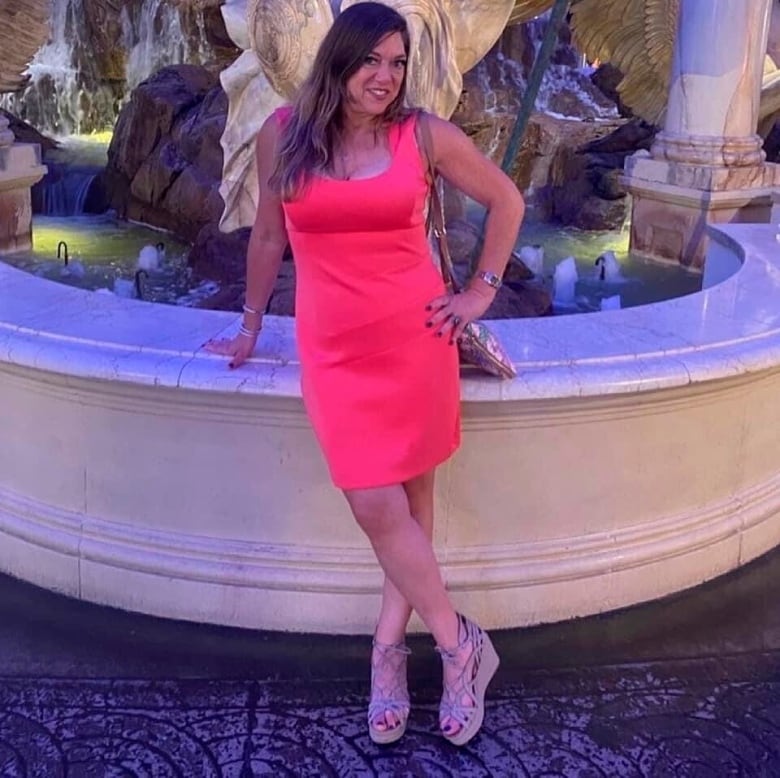 Estelle Hedaya is seen in this June 1 photo. If her remains are found, it would bring the death toll of the Surfside, Fla., condo collapse to 98. (Liz Segel/AP)

"As we enter month two alone, without any other families, we feel helpless," he told The Associated Press on Friday. He said he gets frequent updates from the medical examiner's office.

Leah Sutton, who has known Hedaya since birth and considers her like a daughter, is worried that she will be forgotten.

"They seem to be packing up and congratulating everyone on a job well done. And yes, they deserve all the accolades, but after they find Estelle."

The collapse fuelled a race to inspect other aging residential towers in Florida and beyond, and it raised broader questions about the nation's regulations governing condominium associations and building safety.

Shortly after the disaster, it became clear that warnings about the 12-storey Champlain Towers South, which opened in 1981, had gone unheeded.

A 2018 engineering report detailed cracked and degraded concrete support beams in the underground parking garage and other problems that would cost nearly $10 million US to fix.

There is evidence of structural problems at a Miami-area condo building before it collapsed as the search through the rubble enters a sixth day. 1:52

The repairs did not happen, and the estimate grew to $15 million US this year as the owners of the building's 136 units and its governing condo board squabbled over the cost, especially after a Surfside, Fla., town inspector told them the building was safe.

A complete collapse was all but impossible to imagine. As many officials said in the first days after the catastrophe, buildings of that size do not just collapse in the U.S. outside of a terrorist attack. Even tornadoes, hurricanes and earthquakes rarely bring them down.

The ultimate fate of the property where the building once stood has yet to be determined. 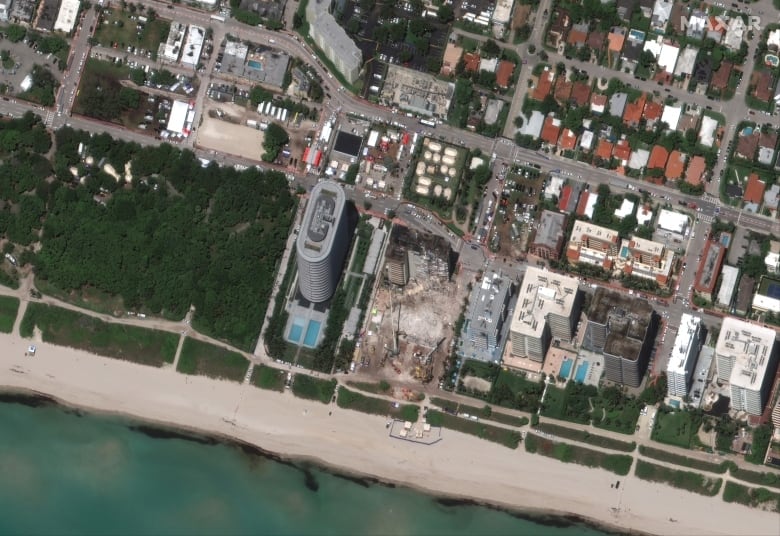 A judge presiding over several lawsuits filed in the collapse aftermath wants the property sold at market rates, which would bring in an estimated $100 million or more.

Some condo owners want to rebuild, and others say a memorial should be erected to remember the dead.

"All options are on the table," Miami-Dade Circuit Judge Michael Hanzman said this week at a hearing.

Miami-Dade Circuit Judge Michael Hanzman listens as tenants share their thoughts regarding the future of the site of the Champlain Towers South building in Surfside, Fla., on Wednesday. (Carl Juste/Miami Herald/AP)

The first calls to 911 came at about 1:20 a.m., when Champlain residents reported that the parking garage had collapsed. A woman standing on her balcony called her husband, who was on a business trip, and said the swimming pool had fallen into the garage.

Then, in an instant, a section of the L-shaped building fell straight down. Eight seconds later, another section followed, leaving 35 people alive in the standing portion.

In the initial hours, a teen was rescued, and firefighters believed others might be found alive. They took hope from noises emanating from inside the pile that might have been survivors tapping, but in retrospect, they said the sounds likely came from shifting debris.

Rescue crews worked tirelessly, even when smoke and heat from a fire inside the building's standing portion hampered their efforts.

They persisted when the temperatures pushed into the high 30s under the blazing sun, some toiling until they needed IVs to replenish fluids. They carried on when tropical storm Elsa passed nearby and dumped torrential rain, leaving the pile only when lightning developed.

The portion of the building that remained standing posed another grave threat as it loomed precariously above the workers. Authorities ordered it demolished on July 4.

In the end, crews found no evidence that anyone who was found dead had survived the initial collapse, Cominsky said.