The man suspected of opening fire at an LGBTQ nightclub in Colorado Springs was being held on murder and hate crimes charges Monday, two days after the attack that killed five people and left 17 others with gunshot wounds.

The charges were preliminary, and prosecutors had not filed them in court. The hate crime charges would require proving that the gunman was motivated by the victims' actual or perceived sexual orientation or gender identity.

Officials on Monday clarified that 18 people were hurt in the attack, not 25 as they said originally. Among them was one person whose injury was not a gunshot wound. Police had earlier said some of the survivors were hurt while trying to flee. 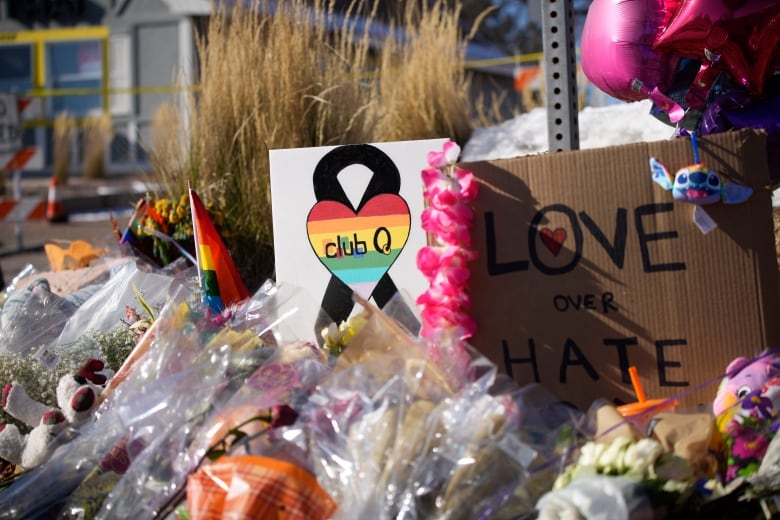 Flowers and other items are seen at a makeshift memorial near Club Q on Monday. (David Zalubowski/The Associated Press)

The attack was halted when a patron grabbed a handgun from the gunman, hit him with it and pinned him down until police arrived minutes later.

Court documents laying out what led to Aldrich's arrest have been sealed at the request of prosecutors, who said releasing details could jeopardize the investigation. Information on a lawyer for Aldrich was not immediately available.

Police were expected to release more details about the shooting at a news conference Monday evening. Mayor John Suthers said there was "reason to hope" all of the hospitalized victims would recover.

A law enforcement official said the suspect used an AR-15-style semiautomatic weapon in Saturday night's attack at Club Q, but a handgun and additional ammunition magazines also were recovered.

Club Q, a long-standing venue in a modest strip mall, was described by many as a safe haven for the LGBTQ community.

One of the victims was identified as Daniel Aston, 28, a transgender man and bartender at the club who also performed in shows as a dancer, according to a Colorado Public Radio interview with his mother, Sabrina Aston. 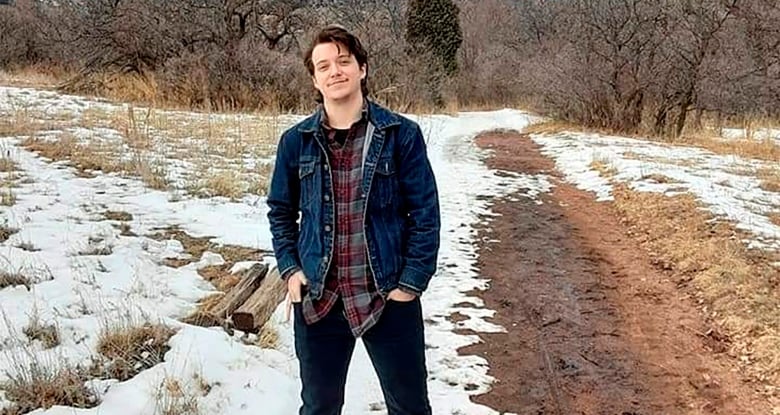 Daniel Aston, a bartender at Club Q who also performed as a dancer in its shows, was one of the five people killed in the shooting. (Supplied by Jeff Aston/The Associated Press)

"He was the happiest he had ever been," she said. "He was thriving and having fun and having friends. It's just unbelievable. He had so much more life to give to us and to all to his friends and to himself."

Anxiety within many LGBTQ communities in the United States has risen amid a divisive political climate and after a string of threats and violence targeting LGBTQ people and events in recent months.

The shooting rekindled memories of the 2016 massacre at the Pulse nightclub in Orlando, Fla., that killed 49 people. Colorado has experienced several mass killings, including at Columbine High School in 1999, a movie theatre in suburban Denver in 2012 and at a Boulder supermarket last year.

Already questions were being raised about why authorities didn't seek to take Aldrich's guns away from him in 2021, when he was arrested after his mother reported he threatened her with a homemade bomb and other weapons.

Sheriff's deputies evacuated about 10 nearby homes until Aldrich eventually surrendered. They found no explosives but Aldrich was booked into the county jail on two counts of "felony menacing" and three counts of "first-degree kidnapping," the press release said. 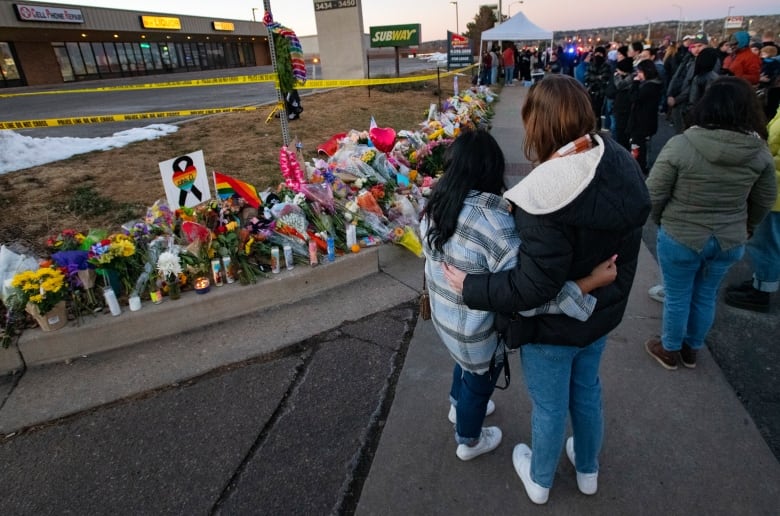 Hundreds of people gather at a memorial outside Club Q on Sunday. The shooting came just at the start of Sunday's Transgender Day of Remembrance. (Christian Murdock/The Gazette/The Associated Press)

Gun control advocates are asking why police didn't try to trigger Colorado's "red flag" law, which would have allowed authorities to seize the weapons his mother says he had. There's also no public record prosecutors ever moved forward with the felony kidnapping and menacing charges against Aldrich.

Suthers said on NBC's Today that the district attorney would file motions in court Monday to allow law enforcement to talk more about any criminal history "that this individual might have had."

Detectives were examining whether anyone had helped the suspect before the attack, police Chief Adrian Vasquez said.

The shooting came during Transgender Awareness Week and just at the start of Sunday's Transgender Day of Remembrance, when events around the world are held to mourn and remember transgender people lost to violence.

It was the sixth mass killing in the U.S. this month and came in a year when the nation was shaken by the deaths of 21 in a school shooting in Uvalde, Texas. 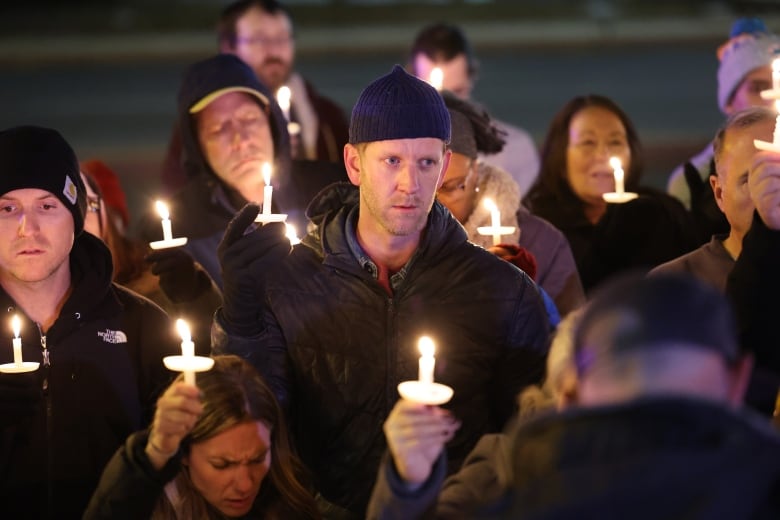 People hold a vigil at a makeshift memorial near Club Q on Sunday night. Gun control advocates are questioning why the suspect had access to guns after his past arrest for threatening his mother with weapons. (Scott Olson/Getty Images)

Support is available for anyone affected by this report. You can talk to a mental health professional via Wellness Together Canada by calling 1-866-585-0445 or text WELLNESS to 686868 for youth or 741741 for adults. It is free and confidential.