Count Six as Number 2 – the second Broadway musical in as many days to announce a reopening date: The crowd-pleasing contemporary-pop take on the wives of Henry VIII will begin performances at the Brooks Atkinson Theatre on Friday, Sept. 17, with an official opening night of Sunday, Oct. 3.

Tickets to Six will go on sale to the general public Monday, May 10. Producers Kenny Wax, Wendy & Andy Barnes, George Stiles and Kevin McCollum made the announcement today.

The musical had initially been set to open on March 12, 2020 – the very date Broadway was shut down due to the Covid-19 pandemic. The show had already begun previews (and critics likely had reviews filed and ready to post). The reopening cast was not announced today.

'The Phantom Of The Opera' Announces Broadway Reopening

The reopening announcement comes a day after New York Gov. Andrew Cuomo gave the go-ahead for Broadway to open its doors this September to 100% capacity audiences, providing the venues require proof of vaccination or negative Covid test results. Otherwise, the venues would have to maintain CDC guidelines for social distancing and limited capacities, which the industry has rejected as economically unfeasible. 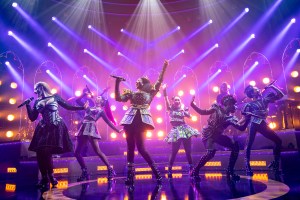 Yesterday, the long-running The Phantom of the Opera became the first Broadway production to announce its post-Covid return, with performances beginning Friday, Oct. 22.

“It feels so unreal to be writing this, but we are both unbelievably excited Broadway is returning and that Six will finally open on Broadway,” said the pop musical’s creators Toby Marlow and Lucy Moss in a statement. “And this is not just because we can’t wait to be reunited with our Broadway family, but also because Six opening means that the theatre industry is on the road to returning.

“Soon the theater community will be able to come together after a year of unimaginable challenges – and this is what fills us with just absurd and ridiculous amounts of happiness,” the duo continued, ending their statement with “WOOOO!”

Six, which allows each of the wives more than a moment in the musical spotlight to reclaim her identity from the shadows of history and Henry, began as a student production in a 100-seat venue during the 2017 Edinburgh Fringe Festival, quickly gaining a worldwide audience. At the time of the shutdown, the musical was playing to sold out houses in London’s West End, and across the UK and Australia.

“To say it’s been a long time coming would be an understatement and we are profoundly grateful to begin…anew,” said producer Kevin McCollum in a statement.

Six is co-directed by Lucy Moss and Jamie Armitage and features choreography by Carrie-Anne Ingrouille.

Will The Walking Dead's Andrew Lincoln Ever...