The latest development in Spotify’s ongoing and ambitious podcast push is the launch of a new charting endeavor, which will track its most popular and trending shows.

The launch ostensibly serves as a challenge to Apple‘s podcast charts — which the tech giant publishes for both top episodes and top shows — and which have long served as one of the industry’s de facto ranking systems.

Spotify said its two new charts will roll out in 26 markets, available in the Spotify app for both iOS and Android. (In the ‘Browse All’ section of the app, tap ‘Podcasts’, whereupon a new ‘Podcast Charts’ tile appears). Billed as a discovery tool, Spotify says that one chart, ‘Trending Podcasts‘, will track the 50 fastest-growing shows in each of the 26 markets, while a second, ‘Top Podcasts‘, will list the 200 most popular shows by region, based on “recent listener numbers.” (Spotify did not provide any additional details about how its charts are measured).

That said, in seven markets — including Brazil, Australia, Germany, Mexico, Sweden, the U.K., and the U.S. — Spotify will break out its ‘Top Podcasts’ charts into different content categories, such as ‘true crime’ and ‘health and wellness’.

The charts will also arrive with new promotional tools for creators. When their shows are charting, for instance, a notification will appear in the Spotify For Podcasters analytics dashboards. Creators can then turn these notifications into visual cards to be shared across social media.

Spotify says it currently hosts 1 million podcasts — while Apple confirmed in April that it had crossed the 1 million total podcasts threshold as well.

At press time, Spotify and Apple’s top podcast charts were markedly different — but with some overlap (see below). The top five podcasts on Spotify are: The Daily, NPR News Now, Crime Junkie, Call Her Daddy, and Last Podcast On The Left. On Apple, they are: Park Predators, The Joe Rogan Experience (notable given that Rogan has signed a $100 million deal for Spotify exclusivity beginning on Sept. 1), Crime Junkie, The Daily, and Wondery‘s Guru: The Dark Side Of Englightenment. 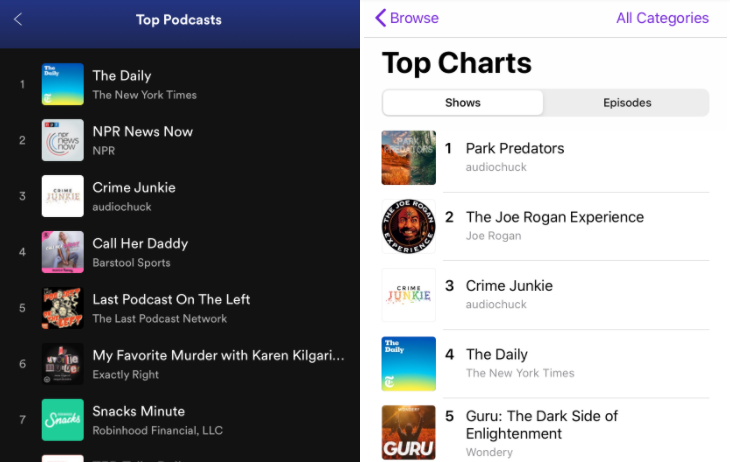 Spotify’s on the left, Apple on the right.