Sudanese security forces have continued to commit "war crimes and other serious human rights violations" in the Darfur region, Amnesty International said Tuesday, as the African country has been rocked by political turmoil following the military's ouster of autocrat Omar al-Bashir in April.

Based on "disturbing new evidence, including satellite imagery," Amnesty said the abuses in Darfur at the hands of Sudanese paramilitary units, the Rapid Support Forces (RSF), include the destruction of entire villages, as well as "unlawful killings and sexual violence."

The RSF grew out of the notorious Janjaweed militias mobilized by al-Bashir during the Darfur conflict in the early 2000s. The militias were widely accused of crimes against humanity and al-Bashir — now jailed in the capital of Khartoum — was indicted on charges of genocide.

RSF Cmdr.-Gen. Mohamed Hamdan Dagalo, better known as Hemedti, now serves as deputy head of the ruling military council. The coup leaders are locked in a growing violent confrontation with a protest movement that is demanding they hand power over to a civilian leadership now that al-Bashir is gone.

A spokesperson for the military council did not immediately answer calls or return messages seeking comment.

"In Darfur, as in Khartoum, we've witnessed the Rapid Support Forces' despicable brutality against Sudanese civilians — the only difference being, in Darfur they have committed atrocities with impunity for years," said Kumi Naidoo, secretary general of Amnesty International.

He urged the UN and the African Union "not turn their backs on people in Darfur who rely on peacekeepers for protection."

He warned that if their joint peacekeeping force, known as UNAMID, is dismantled and the peacekeepers pull out of Darfur, this "would recklessly and needlessly place tens of thousands of lives at risk by removing their only safeguard against the government's scorched earth campaign."

The UN said Monday that Sudan's military rulers issued a decree demanding the mission in Darfur hand over its premises as part of its withdrawal plan next year.

The UN is expected to vote at the end of the month about the future of the already-reduced force. The target for ending the mission is June 30, 2020. 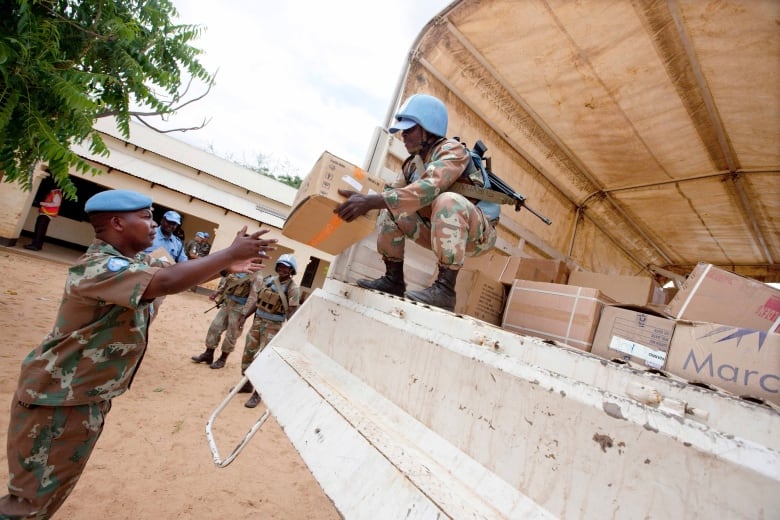 UNAMID peacekeepers from South Africa unload boxes of medication to deliver to a hospital in Kutum, North Darfur, on Aug. 12, 2012. Amnesty International's secretary general says if the UNAMID peacekeeping mission is dismantled, it could be devastating. (Albert Gonzalez Farran/UNAMID/Reuters)

Human Rights Watch said Tuesday that, based on the peacekeeping mission's own reports, the Rapid Support Forces now occupy nine of 10 sites vacated by the UN force within the past eight months.

The New York-based group said the RSF violently broke up the protesters' main sit-in camp outside the military's headquarters in Khartoum on June 3.

More than 100 people were killed in the deadly crackdown on the pro-reform movement in Khartoum and elsewhere across Sudan, according to protest organizers. In response, the opposition started a general strike on Sunday, the first day of the work week in Sudan, in a renewed bid to pressure the military council to hand over power to civilians.

The Forces for Declaration of Freedom and Change, which represents the protesters, said Tuesday they decided to suspend their general strike and campaign for civil disobedience until further notice. They called on Sudanese to resume their work on Wednesday.

The military-run government did not appear to be softening its position. The strike was successful in the first day, according to protest leaders, but on Tuesday many shops and businesses reopened and there was visibly more traffic in the streets of Khartoum and its sister city of Omdurman.

Meanwhile, an Ethiopian envoy said negotiations between the military council and protest leaders would resume "soon." Mahmoud Dirir told a news conference in Khartoum on Tuesday that all previous deals between both sides have been restored and that the new talks would focus on the makeup of the disputed sovereign council.

Ethiopian Prime Minister Abiy Ahmed has been trying to revive negotiations between the generals and the protest leaders and has visited Khartoum.

The internet monitoring group NetBlocks said that Sudan's remaining internet connectivity was disconnected late Monday. Internet had largely been cut off in the capital already.

Also on Tuesday, the Central Committee of Sudanese Doctors said RSF forces attacked a market the previous day in the town of Deleig in central Darfur.

The medical group said it documented 11 deaths, including nine which it blamed on the paramilitary force members. It said the attack wounded at least 20 people.

The committee is the medical arm of the Sudanese Professionals Association, which spearheaded protests against al-Bashir and is now leading a campaign of civil disobedience against the military rulers.

The UN's humanitarian agency said customs offices at Port Sudan, the country's main port, were open on Monday and resumed their functions with limited capacities.

The UN Humanitarian Air Service also operated as normal on Monday, said the UN Office for the Coordination of Humanitarian Affairs.

5 Today's Love Horoscopes For All Zodiac Signs On Sunday,...

6 Jessica Chastain Explains Why She Can't Re-Watch One Of...

7 Joe Biden Asks “A Nation Furious At Injustice” To...