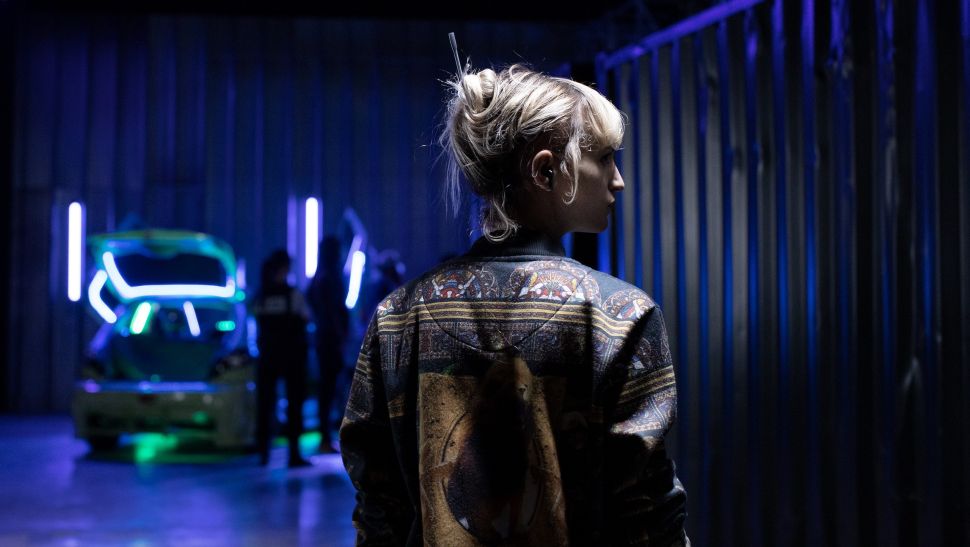 Titane, winner of the Palme d’Or at Cannes Film Festival.

The Cannes Film Festival needs no introduction. Arguably the crème de la crème of film festivals, the event is so dedicated to the cinematic experience, it is the only major festival engaged in an all-out war against Netflix.

As the first major festival of the year to return to in-person only, there was a lot of anticipation and anxiety surrounding it. With a substantially decreased attendance, and the introduction of an online ticketing system to avoid hours-long lines, it was an interesting year to make it your first Cannes, but surprisingly enough it ran smoothly. No matter where you stood in the mysterious press color badge caste system, it was easy to get a ticket to any screening, or even try skipping all lines and go at the last minute. It remains to be seen if this system carries over to next year, but it’s hard to imagine a return to standing in a line for hours in the scorching French heat after the breeze that was 2021.


As for the movies, things were back to normal, kind of. There were big, flashy, red carpet premieres from all around the world, hidden gems and quite a few genre films that made headlines — including only the second-ever Palme d’Or winner directed by a female director. Without further ado, here are the best movies we saw at Cannes.

The stunning follow-up to the coming-of-age cannibal film Raw, Julia Ducournau’s Titane is equal parts horrifying and tender, with a lot of morbid humor sprinkled on top. It is nearly impossible to describe the film without spoiling at least some of it, so we’ll say that it’s about a woman on the run who undergoes more than one surprising transformation when she decides to pose as the long-lost son of a fire captain. The visuals are striking, the gore is sudden and macabre, but there is a surprisingly endearing story of found families here that makes Titane a unique diesel-powered experience.

Wes Anderson’s latest is a fascinating and hilarious ode to magazine journalism, as well as the ultimate Wes Anderson experience, featuring every Wes Anderson-ism in the book to the point where it threatens to be a sensory overload. Thankfully, this anthology film quickly moves along to the next thing before you get overwhelmed, offering thoughtful, quirky stories as varied as those you’d read in The New Yorker, with incredible visuals, including some stunning animated sequences. The film also features a phenomenal cast, many of whom are in the film for a minute, while still making a lasting impression.

Paul Verhoeven’s lesbian nun thriller is everything you think it is, but also so much more than it’d let you to believe. Loosely inspired by a true story of a nun who got stripped of her ranks, the film follows a nun-in-training with a unique connection to God, who seems to always answer all her prayers instantly, as well as give her visions of a hot Jesus that kills snakes and decapitates would-be rapists in her dreams. Verhoeven tells a fascinating tale of faith, suffering and of who gets to decide what God’s will is, resulting in the best faith movie since Scorsese’s Silence.


Read our review of Benedetta and our essay on its religious themes.

Val is a film about illusions. The documentary, shot by and about Val Kilmer, and narrated by his son Jack, tricks you from its opening scene into thinking this will be a fun trip down memory lane with behind-the-scenes looks at some of your favorite movies from the ’80s and ’90s. In reality, Val is a somber, honest self-portrait of one of the most misunderstood actors of our time, full of self-reflection and joy. Sure, we get scenes of Kilmer on the set of Batman Forever and The Island of Dr. Moreau, but it is in the home footage and even the present-day footage of Kilmer looking back on his life and experiencing grief that you find the most revealing and heart-breaking moments.


Read our review of Val here.

Kogonada’s follow-up to Columbus is a poignant exploration of memories and family, told through the lens of a minimalistic sci-fi film. In the near future, a tea shop owner buys a robot in order to teach his adoptive daughter about her native China, but when the robot breaks down, the family starts mourning him in ways they never expected. After Yang features striking cinematography that compliments an intimate and emotional script about identity, what it means to be human and what we can mean to other people. All this while also featuring the best dance sequence in a movie since Ex Machina makes for one of the best sci-fi movies in years.

It’s been a while since we’ve got a good airplane-set thriller, and Emergency Declaration reminds us both of why those films are so effective, and why they may be too terrifying to get more than one every decade or so. When a man threatens to unleash a deadly virus on a plane, chaos will erupt at 35,000 feet in the air, while a detective on the ground tries to find what’d drive someone to such a horrible act of violence. The film is shot almost like a documentary, which helps the film feel terrifyingly grounded and realistic without losing a sense of humor.


Read our interview with the director and star of Emergency Declaration.

The Worst Person in the World

This Norwegian rom-com is a gift to people in their late ’20s and early ’30s, a film specifically about the moment in time where you are on the cusp of true adulthood and still completely clueless about what you want in life. The film follows 4 years in the life of a woman named Julie, navigating love life and struggling to find a career and life path she can be into. The film is often hilarious and melancholic, a sweet character study about feeling like a spectator in your own life and finding joy whenever you can.

A rock opera about love, obsession, power, and child exploitation in media, Annette finally brings Sparks to the big screen with the feature film they’ve spent nearly a decade trying to make. Leos Carax brings the story, originated by the band to life with a dreamlike and operated aesthetic, with Adam Driver giving a fantastic performance as an aging standup comic trying to revive his glory days by managing his literal puppet of a daughter. This is a deeply personal, emotionally raw, operatic, epic musical that can be off putting at times, but it’s so unrestrained and unapologetic about what it’s trying to do, you can’t help but sing along.

Read our review of Annette.

A French black comedy with an absurdist look at a society that looks sweet and attractive on the outside, but is hiding a savage and bloody drive that’s waiting to explode, Bloody Oranges feels like the French response to the Argentinian film Wild Tales. The film follows different tales of despair that collide and intersect in darkly hilarious ways before the second half fully descents into madness with gory scenes of reverse that rival a Saw trap. The film includes poignant commentary, terrific performances and a mic drop of an ending that will have audiences talking for hours after the credits roll.

Valdimar Jóhannsson makes his film debut with a horror film that’s equal parts absurdist comedy, nightmare-inducing horror, wrapped inside an intimate family drama. After a married couple finds an odd lamb in the farm that they own, they decide to take it home and raise it as their daughter, while something darker lurks in the shadows waiting to take back what may be theirs. Jóhannsson infuses this slow-burn drama with enough hints at a larger story that you feel familiar with the world and characters without being shown much, from hints at a tragic loss in the family, to a romantic history between the farmer’s wife and his brother, all while slowly building dread that implodes in a haunting and violent finale. For fans of weird nordic fantasy dramas like Border, this is one to keep your eye out for.

Alabama doctor reveals that all but one of her...