Home /
Tech /
The best baby monitors for your home nursery

The best baby monitors for your home nursery

There is nothing more disorienting or surreal than bringing home your first baby. It’s a heady combination of critical responsibility and an uneasy panic of not having any idea what you’re doing. There’s a picture of me with my son asleep on my chest on the first night he came home and my expression reads what do we do now? Having a monitor that I could check frequently while the twins slept helped me relax in those early days, and it’s still part of our nighttime routine.

Initially we used a combination of Owlet’s smart socks and an audio-only monitor, which kept me from sneaking into their room throughout the night to check on them. But there are a lot of options for baby monitors these days. So I’ve spent the last several weeks testing a variety of smart video-enabled models and strapping wearables onto the twins to see what the hardware is capable of, and what features the software offers.

What to look for in a baby monitor
When I needed a baby monitor, I basically snagged the first halfway decent audio-only device that had good reviews on Amazon. I didn’t stop to think about what I actually needed from the device, where I wanted to put it, or what features made sense for my needs. So I didn’t wind up all that satisfied with the purchase, even though the device works fine.
That said, there are still plenty of audio-only monitors being sold. The feature set is usually pretty small, so narrowing down a decision is a little easier in this case. The variations are basically range, battery versus AC power, lights, and controls. Video and smart monitors each have a lot more to offer, with more features and options for you to choose from. 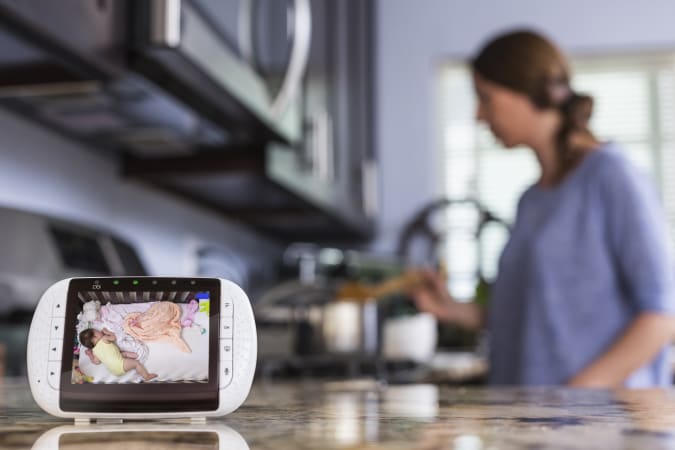 Jinxy Productions via Getty ImagesIt’s worth taking a few moments to make sure you know where you’re putting the camera, if you want to wall mount, crib mount or use on a base, and where the nearest power source is. Also consider how you want to use it: Do you want to use your smartphone or have a dedicated display? Pair with a wearable device? Share with another caregiver? Ensure a secure video feed? What are the most important features to you? A high-def video feed? Background audio? Motion alerts?
Most of the devices I tested offered a solid combination of features, but none of them offered everything. For example, the Owlet and Nanit cameras offer background audio which will play over a lock screen or open apps so if your kiddo starts to fuss you’ll still hear them. That’s pretty useful since you’re going to want to keep tabs on what’s happening in the nursery even if you’re doing other things on your phone. And while most of these devices also provide sound and motion alerts, it’s also important to have an ability to customize the notifications, or even shut off the camera entirely, since you don’t need your phone pinging you about noise when you’re in the nursery trying to soothe a child. Features like two-way audio could be useful for parents who want to verbally reassure a child or sing a lullaby from a distance, but maybe aren’t the highest priority for those who are co-sleeping.
Engadget picks
Best overall: Nanit Pro 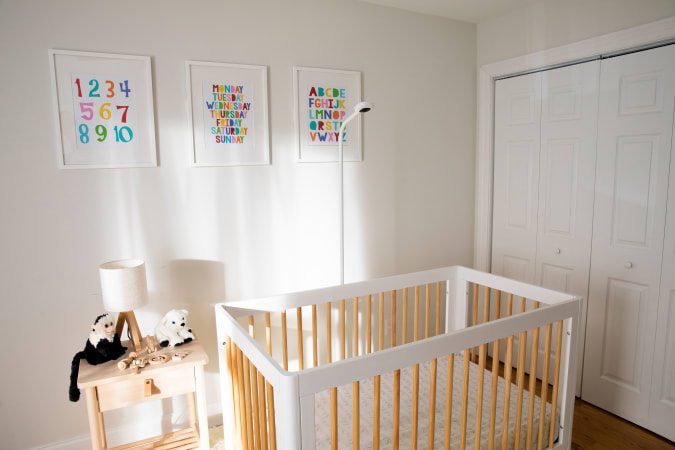 NanitThe Nanit Pro isn’t the only camera I tested that has 1080p HD video, but it’s the one that immediately impressed both my partner and I. The streaming video from the birds-eye view Nanit camera was incredibly clear, even in night vision mode. The Nanit camera is a flat disc that can be mounted to a wall behind a crib or be used free standing. I opted for the latter and I have to say, I intensely dislike the stand. I never felt like I was assembling it correctly even though it comes half-assembled with the charging cable strung through the stand poles. It should be fairly impossible to take a wrong turn here, since all you need to do is screw the contraption together. But it felt flimsy when assembled, and I had to adjust it so it leaned against the crib for support.
Buy Nanit Pro at Amazon - $299
Assembly issues aside, the camera and app were great. Because the camera is set at a bird’s eye view I never had to worry much about adjusting it. It consistently provided a clear picture, loaded quickly and was otherwise flawless. However, that bird’s eye view also means the Nanit is intended for one child and one crib at a time. The app does make it easy to add a second camera, and you can bundle products together on the Nanit site but you’ll still need a camera for each kid.
The app is well organized and the various settings were easy to find. I particularly liked the Memory feature that provided me with a recap of my daughter’s night activities. But the app sends out a lot of notifications — movement or sound detection alerts — and since the microphone is loud enough to pick up my kids screaming from downstairs, these became a bit aggravating. 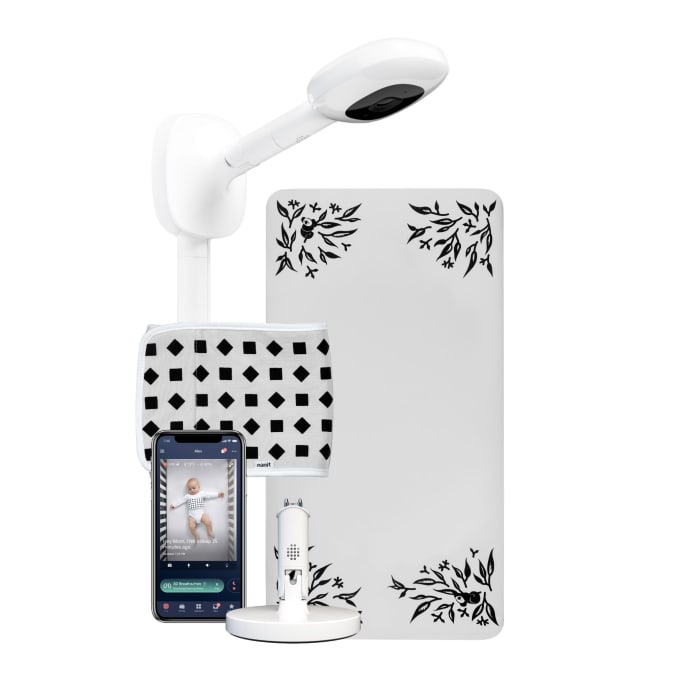 NanitFortunately, these can be minimized or turned off in the settings, and there’s an option to disable the camera entirely from the app. Most of these features are part of the Nanit Insights program, which comes free for one year with a Nanit Pro purchase but thereafter costs $50 a year, or $5 a month. Nanit has three tiers of the Insights platform; without it you lose many of its most valuable features. Nanit’s subscription features also permits multiple users to access a camera feed — up to 50 people, in fact, which seems like a lot of folks watching your baby — but that will cost you $300 a year or $30 a month.
The Nanit pairs with its own wearables, either a Breathing Band — which comes with the Nanit Pro or can be purchased separately for $40 — to measure baby’s breaths per minute or with the Smart Sheets, which estimate your child’s height and track growth. The Breathing Band is a patterned band that wraps around your child’s midsection; there’s also a swaddle and a sleeping bag version. It was easy enough to put on, though my 13-month old daughter immediately began to tug and pull at it.
The band worked fine every time I used it, though obviously if it shifts while a child sleeps the results can be affected. However, unlike the Owlet (which measures pulse ox and heart rate) the Breathing Band is a single-function device. Likewise, the $35 Smart Sheets worked as advertised: The app finds the patterns in the corner of the sheets and you help it triangulate points on your baby from a photo of them on their back. The app works the rest out for you. I’d been curious about how tall the twins had gotten so this was neat to be able to test out but again, it’s a single feature add-on so you’ll have to decide if it’s worth it to you to include.
Best monitor with a wearable: Owlet Cam 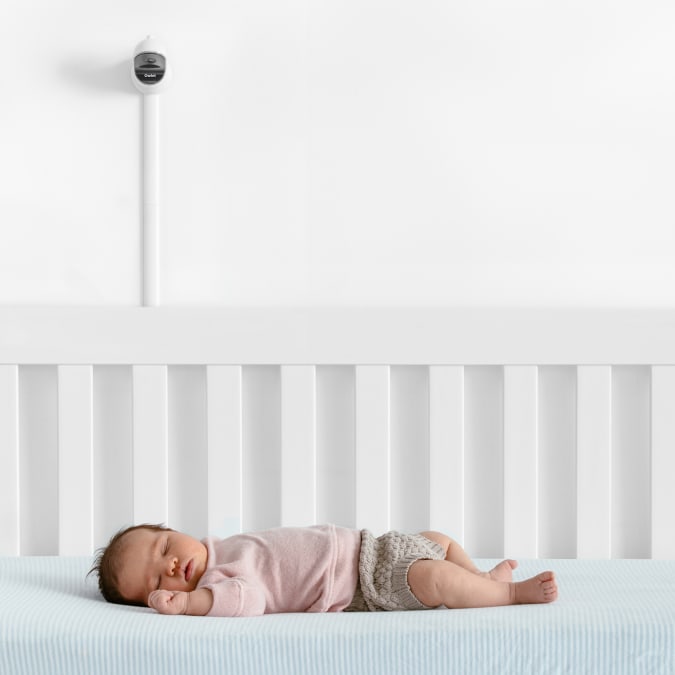 Owlet
Owlet’s $149 Cam provides parents and caretakers with a 1080p HD video feed and night vision courtesy of a 130-degree wide-angle lens. The Cam can sit on its own base or be wall mounted (but not crib mounted) and has to be manually tilted or adjusted. It features two-way audio and sound/motion notifications as well as background audio that will play over other apps so you’ll still hear your little one murmuring even if you’re checking email.
Buy Owlet Cam at Amazon - $149
The video feed is displayed via the Owlet app, which also displays the data from the company’s $299 smart Sock when can be used alongside the Cam. This provides a video feed, room temperature and the baby’s heart rate and pulse ox data all in one place. Up to five people can stream footage at one time as long as you’ve provided them with your account credentials. When I added the Cam to my Owlet app, it automatically showed up on my partner’s Android phone. Owlet uses AES 128-bit encryption and a TLS connection to WiFi for security and because it should be connected to your own private network, Owlet claims the system is safer than analog monitors. 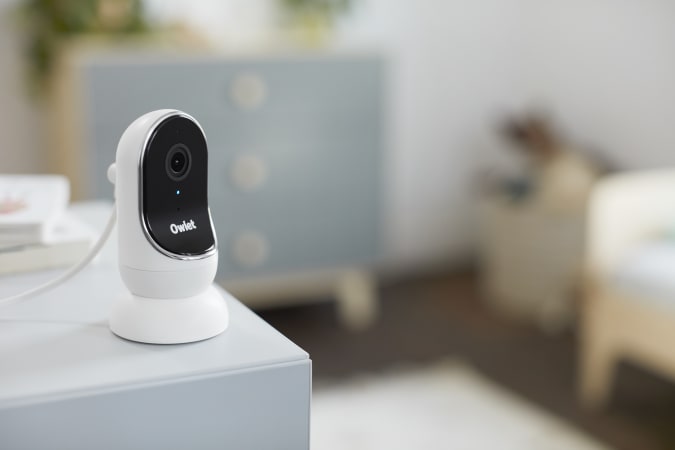 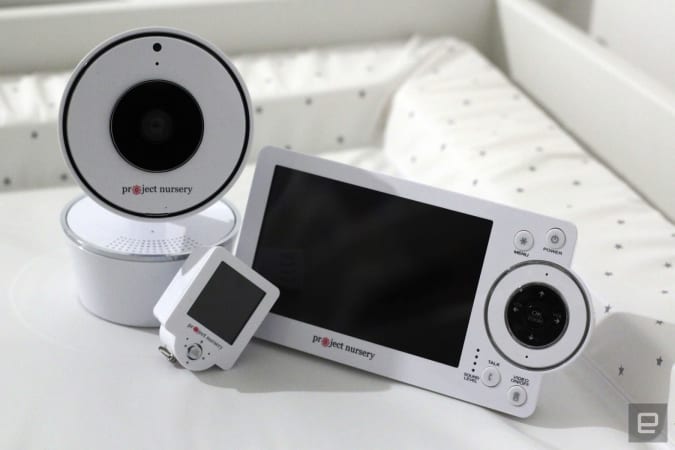 EngadgetProject Nursery also offers a 5” closed-circuit camera system, which Daniel reviewed a few years ago. Much like the Eufy unit and the Infant Optics system, the Project Nursery is smart-ish in that it doesn’t require a WiFi connection and doesn’t have an app. Instead you get a micro-USB powered camera with remote pan and tilt and night vision, a 5” display and a 1.5” mini display that can be worn like a smart watch. While Daniel didn’t find that mini monitor quite as helpful, the simplicity of a non-WiFi connected camera appealed to him as it made for an easy set up and straightforward operation. The Project Nursery camera can also play lullabies or white noise, record video, take still photos and has sound, motion and temperature alerts.
Buy Smart baby monitor at Project Nursery - $150 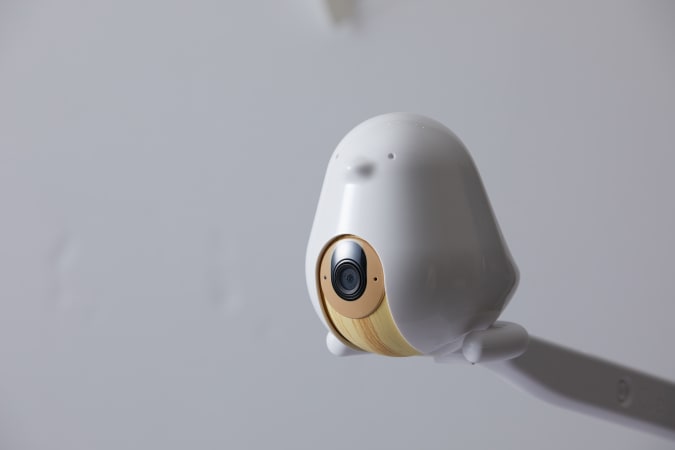 Cubo AILastly, I’ll give a quick shout-out here to the Cubo AI, which mostly had an impressively clear and crisp video feed. Much like the Nanit, it consists of a camera that can be crib or wall mounted, and uses AI to detect if baby’s face is covered. It can also be used as a “toddler cam” to alert you when your little one has ventured into areas they shouldn’t be.
Though the Cubo AI initially worked during set up, it couldn’t refresh the feed or provide me with a consistent view of my daugher’s crib. This is almost certainly due to my laggy satellite internet connection which can’t quite hit the speeds required by the device — understandable but worth noting if you also live in an area without high-speed. I was looking forward to testing out the alerts and sleep notifications, but it looks like that will have to wait until we finish moving to an area with better bandwidth. Once I can finish the testing, I’ll update this guide with additional details on Cubo AI’s monitor.
Buy Cubo AI Plus at Cubo - $299
monitors nursery

Not Over the Hill: 10 Reasons You Should Hire a...