Ending a marriage is always hard on the dependents — and Bill and Melinda Gates have a lot of them.

The Bill and Melinda Gates Foundation, one of the world's largest private foundations, has focused on global health and development and U.S. education issues since incorporating in 2000.

Ron Shulman, a Toronto-based family lawyer, says the couple's pending divorce likely sent shock waves through all of the charitable organizations that depend on their support.

Those groups would most likely be reviewing their contracts and seeking reassurances, he said. "It was most likely a scary moment."

Here's a look at the Gates Foundation and what the future might hold for the organization. 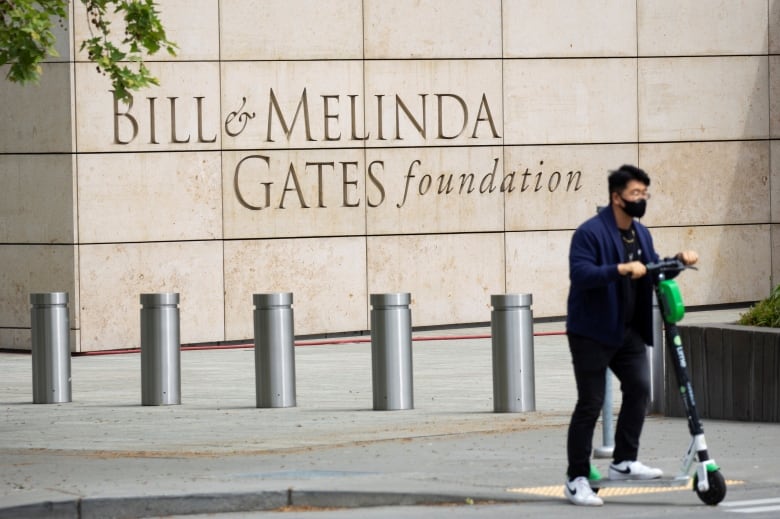 The Bill and Melinda Gates Foundation in Seattle on Wednesday. The non-profit organization has focused its work on global health and development and U.S. education issues since incorporating in 2000. (Lindsey Wasson/Reuters)

Just how big is the Gates Foundation?

It's huge. With an endowment of nearly $50 billion US, the non-profit ranks as the largest private philanthropic foundation in the United States.

From 1994 to 2018, the couple gifted more than $36 billion to the Seattle-based foundation, according to its website.

Last year, investor Warren Buffett, the founder and CEO of Berkshire Hathaway, reported donating more than $2 billion of stock to the Gates Foundation as part of previously announced plans to give away his entire fortune before his death.

Bill Gates — who made his fortune as co-founder of Microsoft Corp. and at one point was the world's richest man — and his wife pledged in 2010 to donate the vast bulk of their fortune — estimated by Forbes at about $133 billion — to the foundation.

Where does its money go?

The foundation donates about $5 billion annually to causes around the world.

Through their philanthropic efforts, the Gateses reshaped attitudes about the obligations of the uber-wealthy to leverage their vast fortunes for the public good in enduring ways. Just over a decade ago, they created the Giving Pledge, along with Buffett, to persuade their fellow multi-billionaires to commit to give away the majority of their wealth.

A dominant player in development and global health, the foundation wields outsize influence as the largest private donor to the World Health Organization. Last year, it donated $1 billion to combat COVID-19 through administering vaccines.

Melinda Gates's impact on the foundation could be seen in its approach to education funding and gender equity issues, Benjamin Soskis, a historian of philanthropy and a senior researcher at the Urban Institute in Washington, D.C., told The Associated Press. 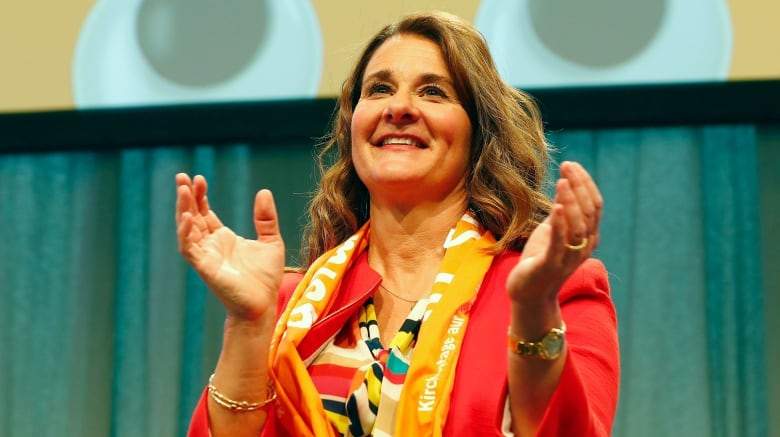 Along with her husband and investor Warren Buffett, Melinda Gates, shown in Berlin in 2017, created the Giving Pledge to persuade their fellow multi-billionaires to commit to give away the majority of their wealth. (Fabrizio Bensch/Reuters)

Shulman said divorces involving people with high net worth, such as the Gateses, are not like normal breakups.

The focus is not on how to afford life going forward but instead about crafting a legacy, he said.

"It's about their objectives and the people who depend on them and the charitable structure close to each of them," Shulman said. 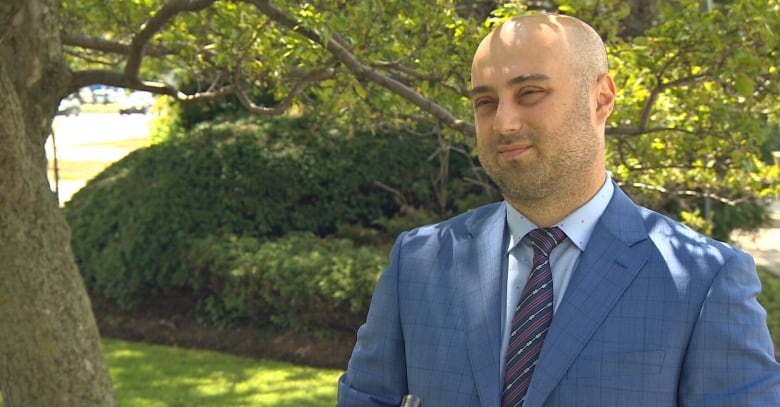 Toronto family lawyer Ron Shulman says the pending divorce of Bill and Melinda Gates likely sent shock waves through the charitable organizations that depend on the couple's support through their foundation. Those groups would most likely be reviewing their contracts and seeking reassurances, he says. (Joe Fiorino/CBC)

Such divorces are complex because high-net worth people usually don't know what they have, he said.

In a statement after the couple announced their pending divorce on Twitter, the foundation said they would remain co-chairs and trustees and that no changes in the organization were planned.

According to their court filing, the Gateses had no prenuptial agreement but have signed a separation contract.

Schulman said the best comparison is with couples who run a business together and then separate.

"There are basically three ways to do it: You either collapse the business and each open their own; or they continue to work together like before; or one of them takes centre stage while the other remains, but in the background. I've seen all three work, but the key question is what are each of their objectives?"

Should charities be nervous?

Divorce lawyers told The Associated Press that the money already committed to the foundation would no longer be considered marital property. Yet it remains unclear how the divorce might affect future donations to the foundation.

"There's no precedent for this, for what the Gateses represent both in their wealth and their status," said historian Benjamin Soskis. "Even more importantly, this reflects this new era that we're in which these engaged living donors really dominate the landscape in a way they haven't for a century." 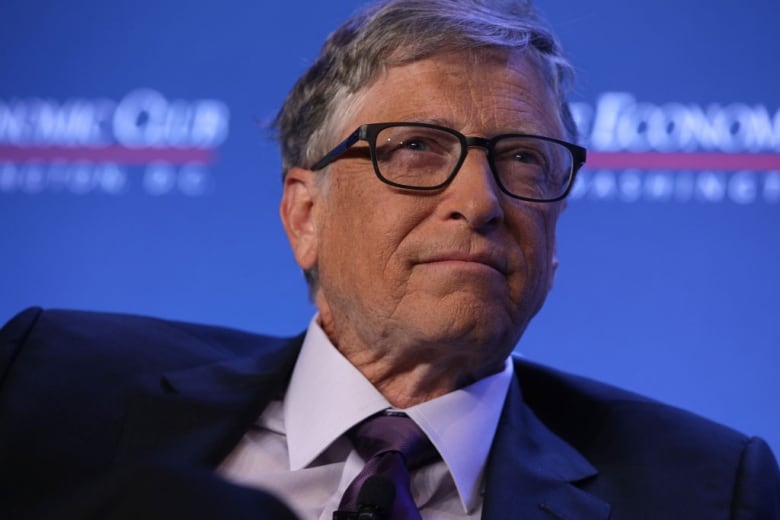 Microsoft co-founder Bill Gates, shown in 2019 in Washington, D.C. In a statement after he and his wife announced their pending divorce on Twitter, their foundation said they would remain co-chairs and trustees and that no changes in the organization were planned. (Alex Wong/Getty Images)

Linsey McGoey, author of No Such Thing as a Free Gift: The Gates Foundation and the Price of Philanthropy, suggested that the philanthropy world is most likely concerned about the divorce in part because past marital breakups have sometimes caused disruptive changes at foundations. For instance, when British hedge fund billionaire Chris Hohn and his wife, Jamie Cooper, divorced in 2013, it resulted in management problems at their charity, the Children's Investment Fund Foundation.

"People do fear that when a divorce like this happens, it can really emphasize the volatility surrounding private giving and the fact that private giving is so contingent on the whims of a couple," McGoey said. "The fact that we don't really know the long-term ramifications of this divorce on the foundation just highlights the fact that we are too reliant as a society on the whims of wealthy people when it comes to voluntarily distributing their excess wealth."

At the same time, some experts note that for years the Gateses, who were married in Hawaii on New Year's Day 1994, have each pursued their own interests within the foundation as well as their own separate investment funds. Since 2008, Bill Gates has had Gates Ventures. And in 2015, Melinda Gates founded Pivotal Ventures, which focuses on helping women and families in the United States.

"In a sense, they've decoupled already," Soskis said. "They have emerged as two distinct individuals with distinct approaches and focus areas already. And in some sense, that might make the divorce easier in an institutional setting because they already have the distinct lines."

future divorce gates foundation whether those should worry

6 Google searches for new measure of skin tones to curb...

8 Emilia Clarke On Whether Her Star Wars Character Could...