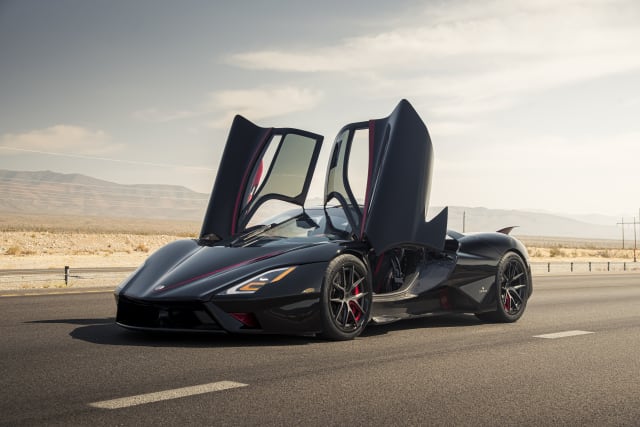 Shelby (no relation to the late race driver Carroll Shelby) started SSC North America in Richland Washington back in 1998. The company produced the Ultimate Aero from 2004 to 2013 and in 2007, the six-liter supercharged V8 sports car took the title of “world’s fastest production vehicle” with an average top speed of 410 km/h (256.18 mph). The Aero held onto its title for three years until the advent of the Bugatti Veyron Super Sport in 2010, which hit 267.856 mph before being dethroned by the 277.87-mph Koenigsegg Agera RS in 2017.

The Ultimate Aero “was a great test bed to see what types of assemblies worked, what was doable, real world settings and all of that,” Shelby said. “When we went into the Tuatara, I really wanted to just have a blank sheet of paper.”

“This is not going to be based off of anything else,” he continued. “Forget what it looks like, what do we want to achieve with this car? Then internally, for our engineering and design team the philosophy was ‘exceed’.”

The process began with Shelby hiring former Pininfarina stylist Jason Castriota. The two set about creating an “aesthetically pleasing vehicle,” according to Shelby. That includes an aerospace-grade carbon-fiber skin that knocked the Tuatara’s curb weight down to a measly 2,750 pounds.

The design was then handed off to the team at Podium Engineering, an Italian aerodynamics firm that regularly works with F1 crews, with a goal of reaching a minuscule .280 drag coefficient and, Shelby said, “a balanced downforce from 150 miles an hour all the way through top speed of this vehicle.” 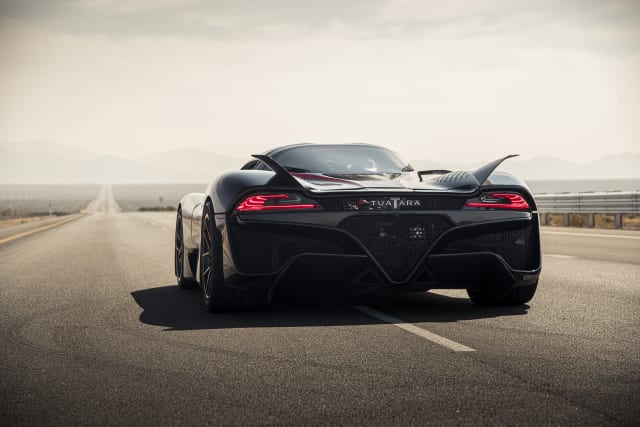 After nearly three years of massaging the design, including the addition of an active rear aero wing, the Podium team succeeded in both goals, notching a .279 drag coefficient (nearly identical to the Polestar 2) and achieving a 37 percent front - 63 percent rear aero balance at speeds exceeding 150 mph.

“We’re extremely proud of the design we ended up with,” Shelby said. “We feel like it's a timeless design that 10 years from now is still going to be cutting edge, and at the same time very safe and stable for high-speed runs.” 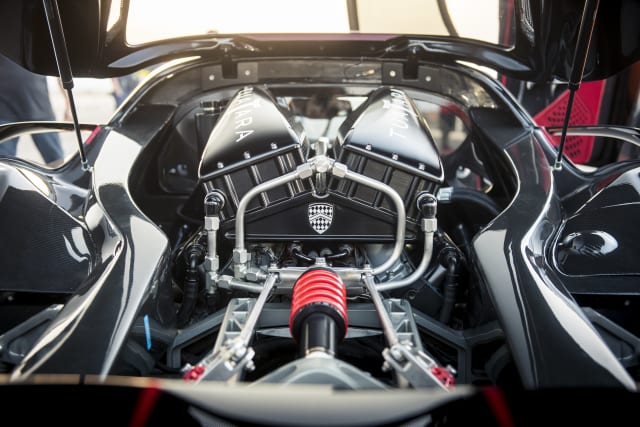 Shelby then teamed up with Tom Nelson from Nelson Racing Engines in Chatsworth, California, known for their extreme twin turbo motor designs, to design the Tuatara’s 1,750 HP 5.9-liter twin turbo V8 engine. “We learned back in the early 2000s that a lot of people can build a forced induction motor or a turbo motor,” Shelby explained. “The big difference is making them live, and being able to go full throttle, full boost for minutes at a time.”

“We put together a package that we felt was absolutely bulletproof,” he continued. “And then we spent months on the dyno, trying to break these motors — literally running them at full throttle, full boost until the things were glowing orange, and they still didn't break. I knock on my wood desk here, but in all these years [of design] and the last year of real world testing, we have yet to have an engine failure or a gearbox failure.”

The sound of the engine was also of paramount importance. “I wanted a flat plane crankiness,” Shelby said. “I wanted something that created a sound that sounded like nothing else. I didn't want the wail of a Ferrari and I certainly didn't want the rumble of a muscle car.”

The third pillar of the Tuatara’s triumvirate is its air intake system. Shelby points out that “intake air temperatures are probably one of the most important things for us whether you're on a road race track or top speed.” The system, which required a couple years of development outside that of the rest of the engine, will keep the intake air temperature within 15 degrees F of ambient. “It doesn't matter what the outdoor temperature is or how hard you run this car,” Shelby said, “and it proved to be extremely key when we just ran this last run.” 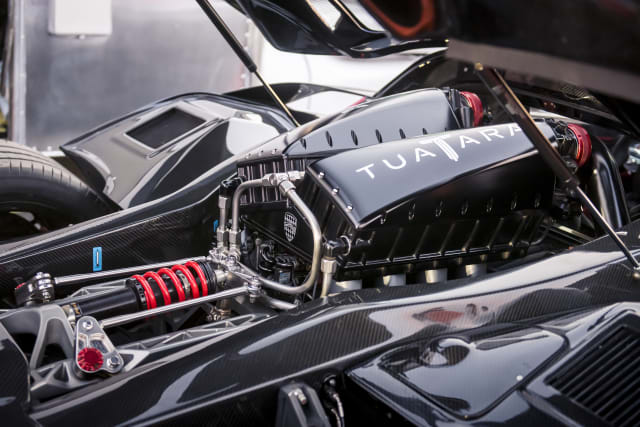 Saturday’s attempt was more than 10 months in the making. The crew had to coordinate with local and state authorities to safely shut down the length of Highway 160 for the weekend, then repeatedly drive the seven-mile length, taking note of the locations of asphalt seams and other hazards that might throw off course a vehicle traveling nearly five times the speed limit, and get their professional driver, the UK’s Oliver Webb, comfortable in the Tuatara before flinging him down the road at a ludicrous speed. SSC NA even took over the private airstrip Tonopah Airport for the week using its aircraft hangar as HQ and the runways as warm-up tracks for Webb. 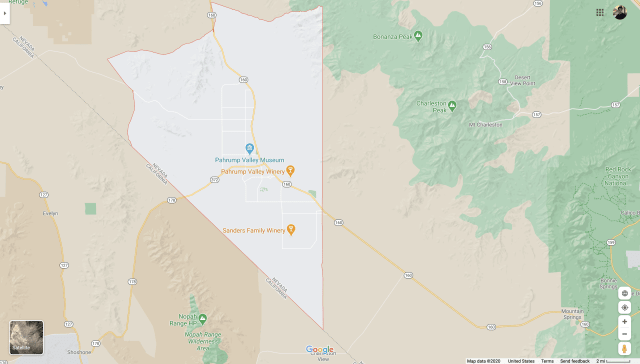 “We wanted to make sure for the straight line testing that we got [Webb] some seat time in prior to this record, because we were very much worried about safety as well, when we're talking about these extreme speeds,” Shelby said.

Crosswinds were one of Webb’s primary safety concerns. When you’re moving at nearly 300 mph, even a mild gust can push a vehicle around the lanes and potentially clear off the road. Webb “had spent some time talking on the phone with [Niklas Lilja], a racing buddy of his that [drove the] Koenigsegg in 2017,” Shelby said. “They had some wind issues out in the desert on that same stretch of road in 2017, which caused some scary moments.”

Throughout the week, conditions had been nearly perfect, according to Shelby, with clear skies and nearly no wind. So of course they changed for the breezy as soon as the SSC NA team arrived onsite on Saturday morning. Still, winds were considered favorable enough that the team decided to push forward.

“We had world record certified witnesses there,” Shelby recalled. “They put the satellite equipment in the car and made sure everything was ready and recording. [Webb] did the first pass, he went down and back, and when he got in he’d done 287 miles per hour.” That alone was enough for SSC NA to reclaim the title of “world’s fastest production vehicle” but not quite good enough for Jerod Shelby. “Our ultimate goal when we started this project in 2010 was 500 kilometers per hour or 312 mph,” he exclaimed. 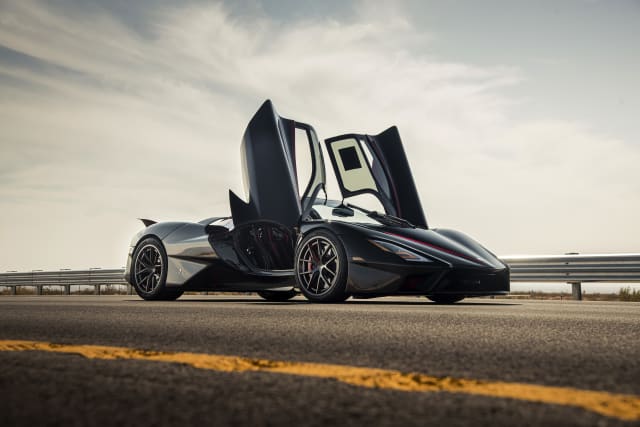 After letting the tires cool for around 20 minutes (since even in the early morning hours, temperatures onsite were hovering around 98 degrees), the team decided to make another pass. “We got satellite equipment set up and went in the opposite direction,” Shelby said. “When he got back, he said ‘the wind is getting worse, I had a little bit of a scare moment -- I got moved over a lane’” after getting hit with a crosswind around mid-track. Even with the disruption, Webb managed to coax the Tuatara up to 301 mph, breaking the world record and joining the Bugatti Chiron Super Sport 300+ as only a handful of vehicles to crack 300.

“All of a sudden Oliver said, ‘Hey, can I talk to you in the transporter real quick?’,” Shelby recalled. “He said ‘I'm only gonna do one more run. The wind is coming up and I did not like when I got hit with that surprise [gust]. You know, I'm sorry, I know we got lofty goals here but I just can't do it.’”

“I said ‘I fully understand, I get it.’ But internally I'm thinking, ‘if we can just do another pass at a little over 300, we've really done something here.’ At the same time, my stomach kind of sank because I knew my goal of 500 kilometers an hour or 312 mph was now off the table,” Shelby admitted.

So with the wind still picking up, Webb and the team prep the Tuatara for one final run as Shelby hopped into a chase vehicle to meet the hypercar at the other end of the track:

By the time we pull in, the car is sitting there, the hoods are up, there are techs checking tire temps and everything. [Webb] is sitting on the ground in front of the car and he's got his head in his hands. It just didn't look right. It didn't feel right.

When I walked up, he said ‘I'm done, I'm never doing this again. I got it with two different gusts and it moved me two lanes over, put me into the rumble strip. We had a really close call.’

And he was shaking. I mean he was emotional. There's a part of me that was so excited and relieved that he was safe. But we were done. I'm also realizing it probably wasn't a good run for speed. As those emotions hit me, all of a sudden Webb looked up and said, ‘Jerry, I saw a really big number on the display.’

“He's the fastest man on the planet right now, for a production car,” Shelby said. “It was just one of those moments that I'll probably never experience again in my life. It was just unbelievable.” 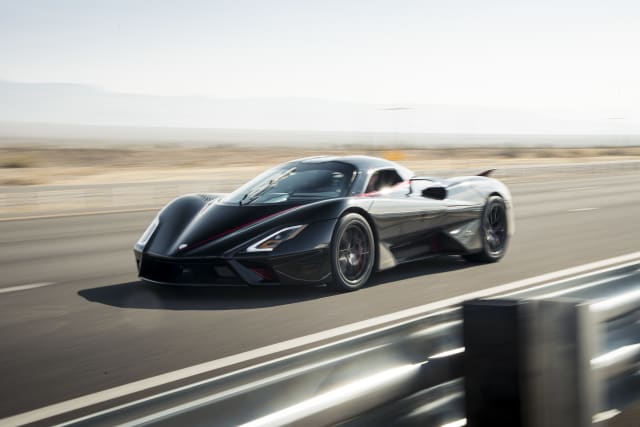 But don’t expect SSC North America to sit back on its laurels, the company is already considering future design improvements — potentially even an electric Tuatara.

“I would say the record that we just achieved would have been really difficult to do with an electric car,” Shelby said. “I mean, they might have beat us to 80, 100 miles per hour but I would challenge any current EV to get to 330 like we just did.”

“I really enjoy the combustion engine and the acceleration and I know that this is not gonna last for that many more years,” Shelby concluded. “I'm watching what's going on going on out there. I really want to see where EV technology goes. And at the right time, that'll be part of the future of the company.”

How The Conners' Katey Sagal Fought To Keep...

6 10 Things to Know Before You Fly This Holiday Season

10 The Good Doctor Needs To Do Something About Morgan After...