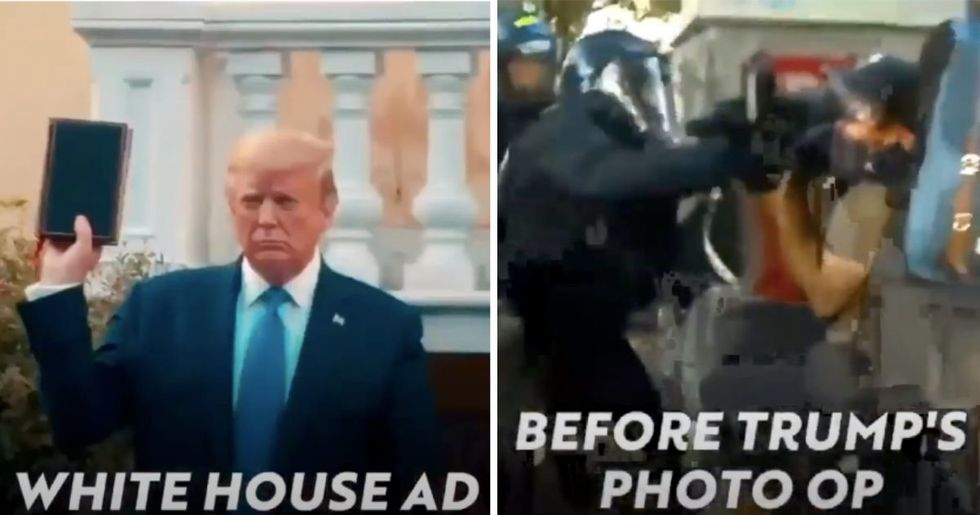 When I wrote about President Trump's walk to St. John's church to hold up a Bible—utilizing police violence against citizens peacefully protesting police violence to clear his path to get there—I thought it was just a bizarre stunt for pictures.

I had no idea the White House was making a propaganda film from it.

It's silly to be surprised at this point, I know. But watching this video made my jaw drop. I have so many questions. Like, why is there not a single word, spoken or written? What exactly is this supposed to convey? Are there any people of color in it? Who chose the triumphant movie trailer music? Is this a parody video? Are we living in North Korea?

Watch for yourself, then check out the video below that shows the reality behind the scenes.

The fact that the president thinks this video makes him look like a strong leader is an indication of how completely out of touch he is. But the fact that he made it while horrendously violating his own citizens' first amendment rights is stark visual proof that he's completely disconnected from both the reality before him and the responsibility he bears as the leader of our nation in a time of crisis.

A video compilation called "Trump vs. Reality" shared by Reddit user Mister T12, shows scenes from Trump's propaganda video cut with scenes from the violent dispersing of protesters and physical attacks on members of the press that had occurred just minutes before his walk to the church. The contrast could not be more striking.


Anyone who can watch this and not see the problem has some seriously thick blinders on. The emperor has no clothes and we've reached a new level of absurdity and horror that's hard to fathom.

We have a president who has only fanned the flames in the largest unrest we've seen in decades. Is this what great looks like? Because if it is, I'd like to go back to halfway decent, please.

white house propaganda video about protests might another planet

How To Deal When The Person You Love Doesn't...

If the NFL really cares about racial justice...