This Ultrasound Shows What Happens To Your Baby When You Smoke

Whether we've ever been pregnant or not, we know that anything a pregnant woman eats, or any bad habits she has, directly affects the unborn child. So, it should come as no shock that smoking while pregnant causes serious damage.

Researchers from Durham University and Lancaster University studied the effects of smoking on fetuses between the 24th and 36th week of pregnancy.

The study included 20 babies, 16 of which had non-smoking mothers, and four with smoking mothers. The mothers who smoked had an average of 14 cigarettes per day.

The researchers then released 80 ultrasound photos upon completion of the study, which shows how the fetuses reacted to their mothers inhaling smoke. And what the ultrasounds found were truly horrifying. 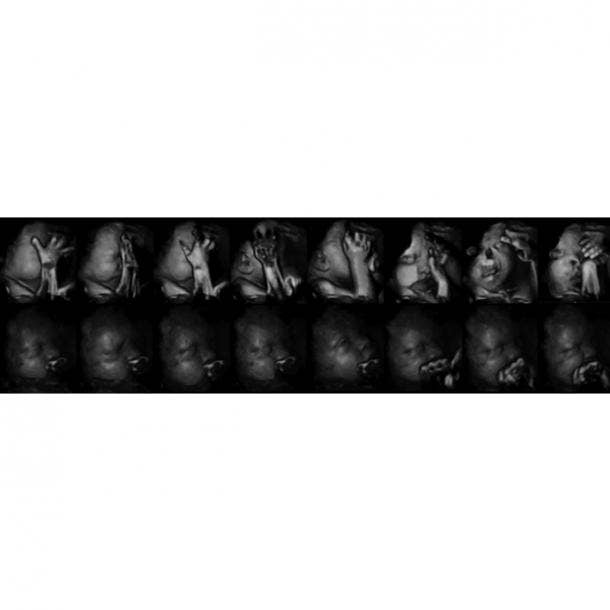 The fetuses whose mothers inhaled smoke covered their faces and moved their mouths more than usual (clearly attempting to escape from the fumes), as shown in the top row.

The researchers said, "Fetuses whose mothers were smokers showed a significantly higher rate of mouth movements than the normal declining rate of movements expected in a fetus during pregnancy."

The reason for the higher-than-normal mouth movements might be linked to the fetal nervous system. The study found that "Facial movements, in particular, did not develop at the same rate and in the same manner as in fetuses of mothers who did not smoke during pregnancy."

Lead researcher, Dr. Nadja Reissland, commented on the findings, saying, "Our findings concur with others that stress and depression have a significant impact on fetal movements, and need to be controlled ... but additionally, these results point to the fact that nicotine exposure per se has an effect on fetal development over and above the effects of stress and depression.

RELATED: The Link Between Oral Sex And Pregnancy

Though the researchers stressed that the findings in this particular study were part of a pilot study, and larger studies are needed to understand the relationship between smoking, depression, stress, and fetal development, it's well-known that smoking during pregnancy is risky.

Tell us something we don't know. It's obvious that smoking while pregnant is evidence of poor judgment and is running the risk of the child being born with complications.

Along with smoking being pretty obviously bad, drinking is just as bad. There's even an entire syndrome named after mothers who drink to access while pregnant: fetal alcohol syndrome. Of course, drinking a little bit of wine here and there is fine, but drinking too much can affect the fetus's development.

Symptoms of FAS include physical defects such as deformed joints, slow growth after birth, and small head and brain circumference — to name a few.

Either way, drinking, and smoking are not great for the fetus, so maybe stick to water.

More for You on YourTango:

Samantha Maffucci is an editor for YourTango who has written hundreds of articles about relationships, trending news and entertainment, and astrology. Visit her author profile for more content.

France to outlaw shredding and gassing of male...

3 Sanditon Reveals How Charlotte Moves On From Theo James'...

7 The Best New Movies and TV Shows to Stream This Week:...

9 More than 100 killed after monsoon in India triggers...