Thousands of people took to the streets of Sydney and other Australian cities on Saturday to protest pandemic lockdown restrictions amid another surge in COVID-19 cases, and police made multiple arrests after crowds broke through barriers and threw plastic bottles and potted plants.

The unmasked participants marched from Sydney's Victoria Park to Town Hall in the central business district, carrying signs calling for "freedom" and "the truth."

There was a heavy police presence in Sydney, including mounted police and riot officers in response to what authorities said was unauthorized protest activity. Police arrested 57 people after objects were thrown at officers.

The protest comes as COVID-19 case numbers in the state of New South Wales reached another record with 163 new infections in the last 24 hours.

Greater Sydney has been locked down for the past four weeks, with residents only able to leave home with a reasonable excuse.

'Cases going through the roof'

"We live in a democracy and normally I am certainly one who supports people's rights to protest ... but at the present time we've got cases going through the roof and we have people thinking that's OK to get out there and possibly be close to each other at a demonstration," said state Health Minister Brad Hazzard.

In Melbourne, thousands of protesters without masks turned out downtown chanting "freedom." Some of them lit flares as they gathered outside Victoria state's Parliament House. 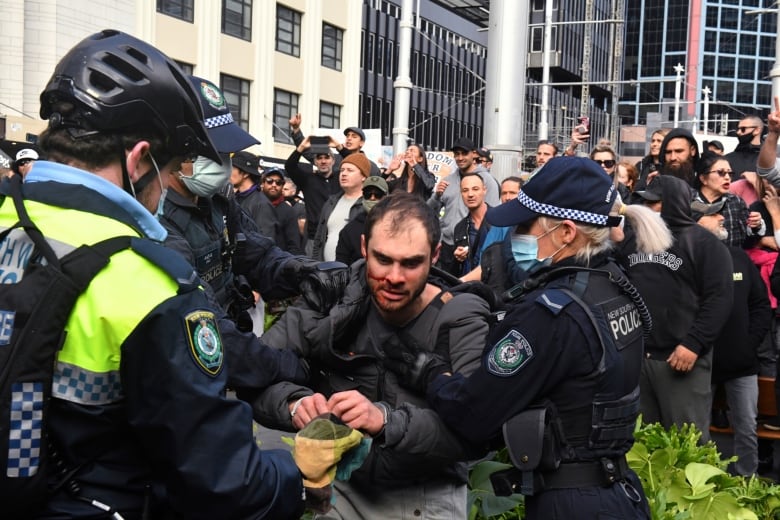 A protester is arrested by police at a demonstration at Sydney Town Hall during a 'World Wide Rally For Freedom' anti-lockdown rally on Saturday. (Mick Tsikas/AAP Image/The Associated Press)

They held banners, including one that read: "This is not about a virus it's about total government control of the people."

A car protest rally was also planned in Adelaide, which is also under lockdown. Police warned they would make arrests over unlawful activity.

As COVID-19 cases rise, Australia has tightened travel restrictions and put half its population back into lockdown. For one Canadian woman in Australia, it means she can't go see her family in Canada. For an Australian family in Vancouver, it's resulted in uncertainty over when they can go home. 2:07

By Friday, 15.4 per cent of the country's population aged 16 and above had received two doses of vaccine for COVID-19.

"We've turned the corner, we've got it sorted. We're hitting the marks that we need to make, a million doses a week are now being delivered," Prime Minister Scott Morrison said. "We are well on our way to where we want to be by the end of the year and potentially sooner than that."

The government said it will send thousands of extra Pfizer-BioNTech doses to Sydney in the coming week while adults in Australia's largest city are also being urged to "strongly consider" AstraZeneca-Oxford in view of the scarcity of Pfizer supplies.

An Iranian nurse who cared for patients with COVID-19 back home and contracted the illness himself earned a gold in the men's 10-metre air pistol at the Tokyo Olympics on Saturday.

At age 41, Javad Foroughi became his country's oldest medallist, taking part in his first Olympics. He trained for the event while working at a hospital in the Iranian city of Ilam.

"I'm very happy I did my job on both sides," Foroughi said through an interpreter. "As a nurse, we battled COVID and it was very hard. As a shooter, I worked a lot the last two years for this moment." 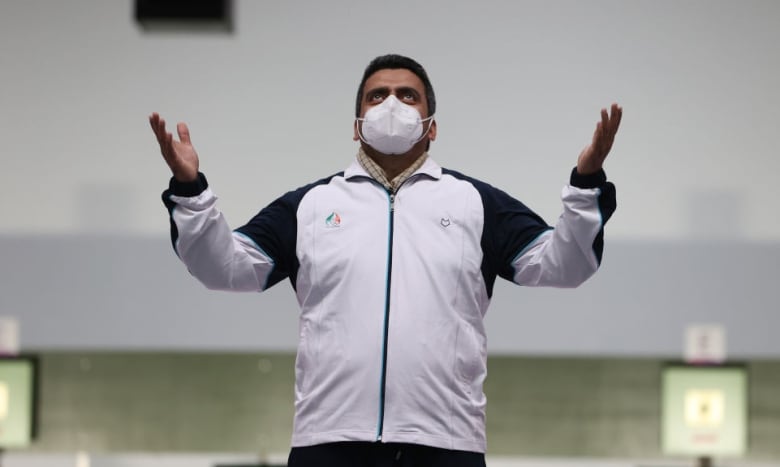 Foroughi contracted COVID-19 early in the pandemic and was unable to train for a month. Shutdowns left him nowhere to shoot once he recovered, so he worked on body and mind training.

He was eventually able to train and compete online with other shooters, honing his craft so he would be ready when in-person competitions resumed.

WATCH | Despite COVID-19 and logistical woes, Tokyo 2020 to be the most inclusive Olympics:

A sour public mood, a COVID-19 state of emergency and logistical challenges have many questioning why the Olympics are happening at all. Yet the Olympic spirit has not been extinguished, with athletes eager to compete in the most inclusive and gender-balanced games in history. 4:54

What's happening around the world

As of Saturday morning, more than 193.1 million cases of COVID-19 had been reported worldwide, according to Johns Hopkins University's case-tracking tool. The reported global death toll stood at more than 4.1 million.

In Asia, the Chinese mainland administered over 1.5 billion doses of COVID-19 vaccines as of Friday, the National Health Commission said on Saturday.

A total of 1,524,897,000 doses of COVID-19 vaccines had been administered throughout the Chinese mainland's 31 provincial-level regions and the Xinjiang Production and Construction Corps. 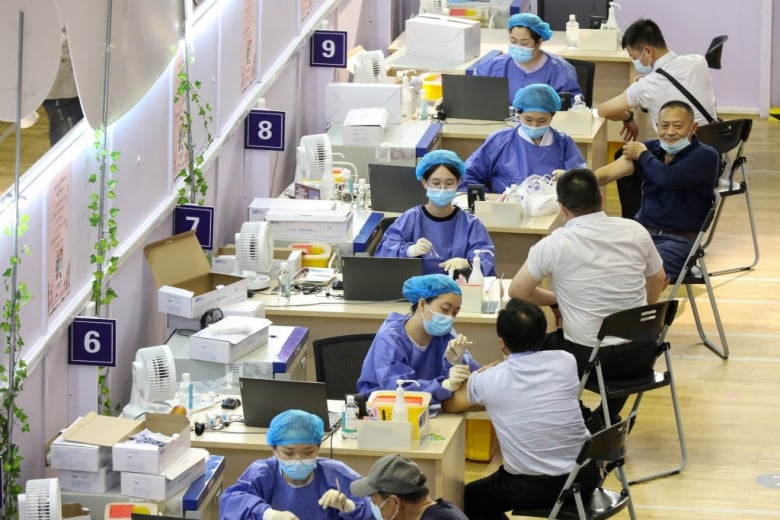 Beijing is promoting the vaccination of minors aged 12 to 17, while a number of provinces, regions and municipalities have gradually started their teenager vaccination programs.

Shifang city of southwest China's Sichuan province has started to offer COVID-19 vaccines to teenagers between 15 and 17 years old.

In Europe, 23,947 new cases were reported in Russia on Saturday, along with 799 more deaths attributed to COVID-19.

Russia has been in the grip of a surge in cases that authorities blame on the more contagious Delta variant, though some officials have suggested in recent days that cases, at least in Moscow, have started to decline.

Amanda Kloots is ‘dating again’ one year after...