Human history has often not been kind to women. Even when they escaped the strict boundaries society placed on them they were often scorned. Cleopatra was a mighty queen but to her Roman opponents she was an Eastern witch who beguiled unwary Roman men to their doom, a reputation she has struggled to shake. Yet there are those women whose achievements were recorded and even brought them praise both then and now.

Here are ten lesser known women from antiquity who deserve your attention.

10 Of History’s Most Scandalous Women

[embedded content]
One of the first forms of writing to be developed was the Cuneiform script of ancient Mesopotamia which emerged around 3100 BC. Huge numbers of clay tablets bearing inscriptions in cuneiform have emerged from the sands and contain some of the earliest and most impressive texts from the ancient world. And off all the writings the earliest author whose name we know was Enheduanna – a princess, priestess, and poet who lived around 2300 BC.

Enheduanna was the daughter of the conqueror Sargon of Akkad and it was he gave her the title of En – reserved for high lords. Having taken over the city of Ur Sargon placed Enheduanna at the head of the city as its chief priestess. It was there that she composed the poems that made her famous for centuries to come.

While most of her poems were written as hymns to the Mesopotamian gods, like Inanna, some deal with the troubles she faced in her life. After the death of her father she was driven from her temple.

“He has turned that temple, whose attractions were inexhaustible, whose beauty was endless, into a destroyed temple. While he entered before me as if he was a partner, really he approached out of envy.”

Later she regained her position and for as long as the cities of Mesopotamia stood her poems were copied and spoken.[1]

[embedded content]
Long before chemistry was a recognised science people were using techniques that would not be out of place in a modern lab. Using heat and solvents to distil chemicals is something all chemists today are trained in – and they were being used 3000 years ago in Mesopotamia by a woman named Taputti. Taputti is the first named chemist in history.

Taputti is named in a small clay tablet that describes her as a perfumer and overseer of a royal palace. To create her perfumes she is said to have used a still to distil essences from various plants. This is also the first mention of a still, a standard piece of scientific equipment.

Taputti was apparently not unique in her position as a chemical worker at the time. The tablet that names Taputti also mentions she had an assistant called… something. Unfortunately the tablet is damaged so only the end of the name, –ninu, survives. As this is a female name ending it seems Taputti was not the only female chemist.[2] 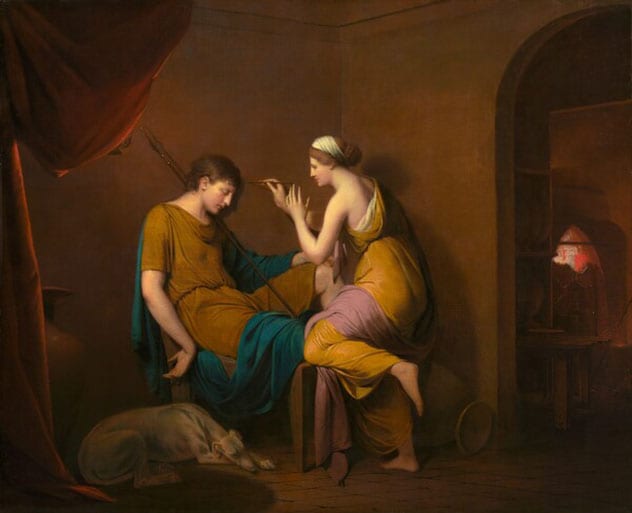 According to Pliny the Elder (though disputed by some as myth) it was a woman who invented portraiture, and helped to invent the modeling of busts in clay. In some sources she is known as Dibutades, in others as Core. When her lover was about to leave her on a lengthy voyage at sea she was saddened to be parted from him. Seeing his shadow on the wall she took a piece of charcoal and traced around it so that she would always be able to see his face.

Dibutades’ father was a potter and was struck by her creativity. Seeing the outline of her lover’s face he decided to model it in clay. By mixing different colours of clay he was able to make tiles that preserved the features of a person long after they had died.

Dibutades was celebrated in antiquity for her contribution to art history and in the Enlightenment many artists made their own portraits of Dibutades in tribute to her.[3] 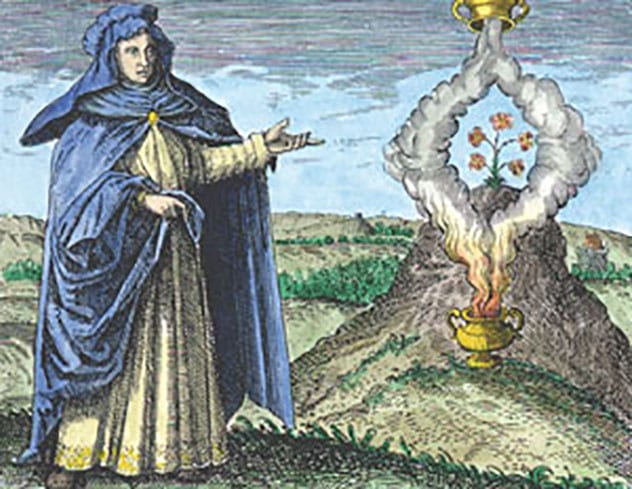 Maria Prophetissima, also known as Mary the Jewess, was an early alchemist who lived in Egypt around the first century AD. Some claim she was the first alchemist in the western tradition. While we do not have any of Mary’s writings she was quoted heavily in later texts and know many of her innovations.

Alchemy is not chemistry and many of Mary’s surviving fragments are mysterious in the extreme. “One becomes two, two becomes three, and out of the third comes the one as the fourth.” The meaning of this is not obvious but luckily several of her innovations are still in use today.

Mary is credited with improving a type of vessel used in distillation that would be familiar to many scientists today. She also pioneered the use of a water bath to stop the temperature of an experiment going above the boiling point of water. Today known as a bain-marie (Mary’s Bath) it is still commonly used in cooking.[4]

[embedded content]
Alexandria in Egypt was one of the intellectual centres of the ancient world. Scholars flocked from around the known world to study in the vast library of the city and learn all that was known at the time. The period of Alexandria’s flourishing however came to an end around the same time that Hypatia of Alexandria died – and the two facts were not unrelated.

Hypatia was a female scholar at a time when this was deeply unusual. She was also a Pagan at a time when Christianity was beginning to take over public life. In the late fourth century AD however it was still possible for a Pagan to teach and Hypatia was a famous teacher. She delivered lectures in public while wearing the male outfit of a scholar. Hypatia was known for her mathematical treatises, her astronomical models, and commentaries on the work of others.

Unfortunately she was closely tied to Orestes, the Roman governor of the city. When the Christian bishop Cyril turned against Orestes it was Hypatia that was blamed for leading the governor astray. A group of Christians destroyed the last remnants of Alexandria’s library and a Christian mob attacked Hypatia. They tore her flesh off using broken roof tiles.[5]

10 Incredible Things That Were Discovered By Women 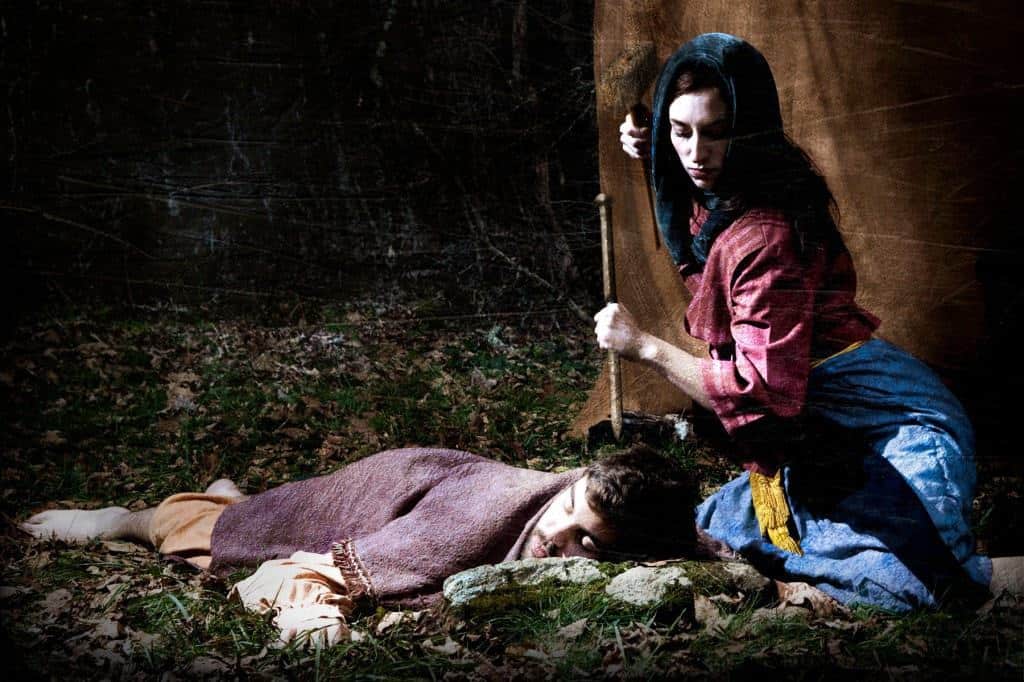 Jael, or Yael, is a fairly obscure figure from the Old Testament. Mentioned only in the Book of Judges she is both a hero to the Jewish people and someone who committed an act of treachery. The Jewish people were being oppressed by the Canaanites and their general Sisera. When Sisera was defeated in battle however he was forced to flee. And he ran right into the camp where Jael was staying.

“Come, my lord, come right in. Don’t be afraid,” Jael called out to Sisera. The general entered her tent, was covered with a soft blanket, given a drink of milk, and promptly fell asleep. It was then that Jael, who was sympathetic to the plight of the Jews, took a tent peg and hammered it into Sisera’s skull. This proved to be fatal.[6]

Sisera was killed in a breach of all laws of hospitality. Jael would normally have been reviled as a traitor but in the Song of Deborah it says:

When Xerxes led a vast force of Persians against the city states of Ancient Greece it seemed impossible that the Greeks would see off the invaders. In a series of stunning victories however the Persians were turned back. One of those victories relied on the help of a female diver called Hydna.

Hydna was the daughter of a famous swimming teacher called Scyllis of Scione. He passed on all his abilities to his daughter and both were called on to help defeat the Persian fleet of ships.

Swimming around ten miles out to sea the pair cut the ships of the fleet loose from their moorings and moved their anchors. The fleet was wrecked. Statues of Hydna and her father were set up at Olympia to honour their bravery. When the Roman Emperor Nero wanted to decorate his city he stole statues from across the empire – one of the ones he took was Hydna’s.[7] 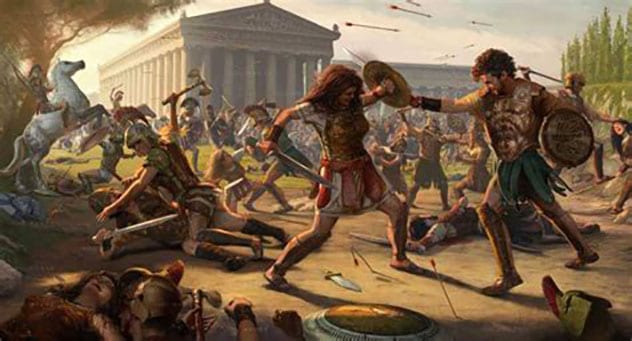 Telesilla was a Greek woman from Argos who lived around 500 BC. When she was growing up she was a sickly child. Hoping to become well she asked an oracle what she should do and the answer was that she should dedicate herself to the Muses. Since the Muses were the divinities in charge of literature, art, and science Telesilla chose to become a poet.

Her poetry was among the most praised of antiquity, though only single word fragments of her poems survive. While none of her writing remains one story from her life has come down to us.

Argos was threatened by the Spartans. The Argive men had gone out to face them in battle and been massacred. It was Telesilla who saved the city from capture. She had slaves and old men man the walls if defence but gave armour and weapons to the women of the city who she led out to battle.

When the Spartans charged their female enemies they were surprised that they did not flee. The Spartans saw that they could not win. If they beat the women then there would be no glory, and if they lost then the shame would be great. The Spartans retreated and Argos was saved. An image of Telesilla was set up that showed her throwing away her books and picking up her helmet.[8] 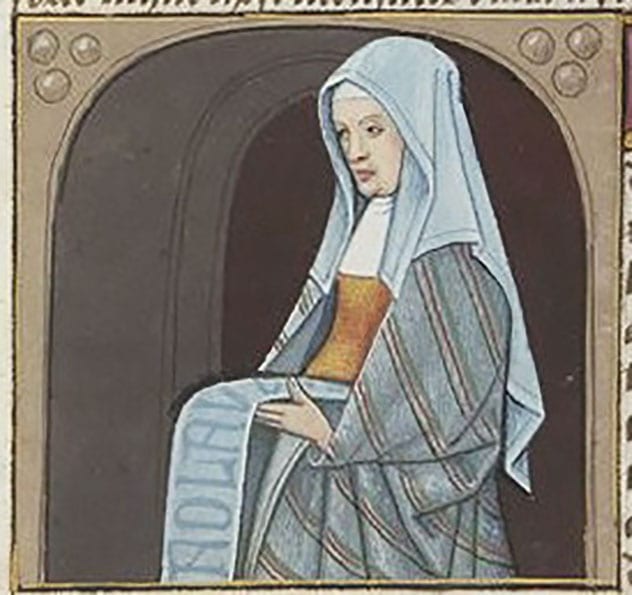 Ancient Athens was a harsh place to have been a woman. Well bred women were kept cloistered in separate quarters within the home and could not even go to the marketplace without a scandal. The only women with some amount of freedom were the professional prostitutes known as hetairai – concubines renowned for their skill in conversation. One of these ladies of ill-repute was Leontion.

One of the greatest philosophers of the day was Epicurus and he welcomed everyone who wanted to learn into his school. Inside Epicurus’ Garden slaves, the poor, and most scandalously women were allowed to discuss philosophy. We know little of Leontion’s work but we do know that she was a close associate of Epicurus – he addressed letters directly to her. “My dear Leontion, what transports of joy did I feel when I read your charming letter.”

History has erased Leontion’s philosophy but has preserved how harshly she was treated. Cicero was shocked that she had dared to argue with male philosophers. “Leontion, that mere courtesan, who had the effrontery to write a riposte to Theophrastus – mind you, she wrote elegantly in good Attic.”[9] 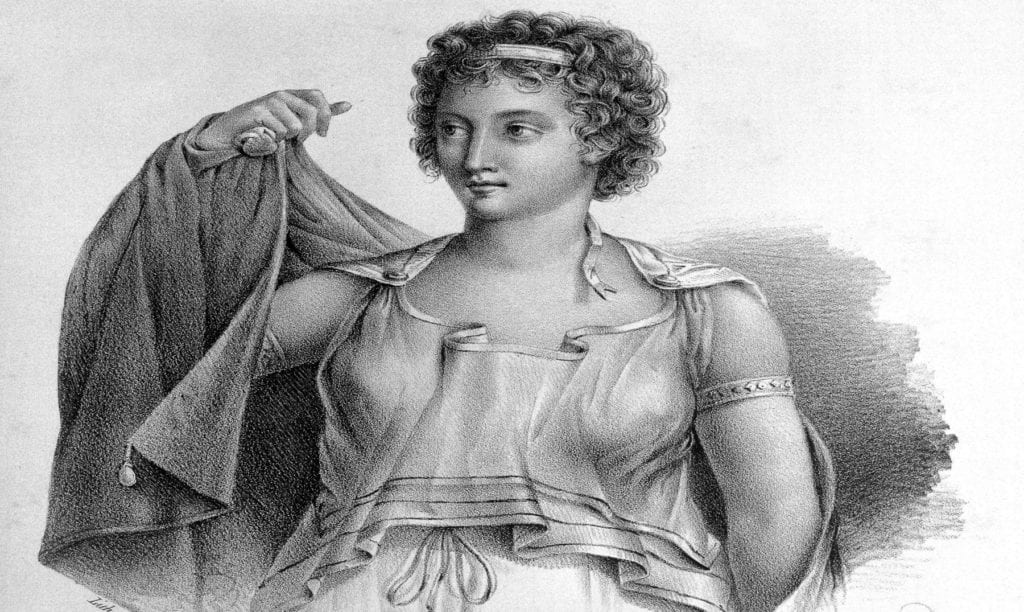 Medicine was a male art in ancient Athens. Men of the time were obsessed with the legitimacy of their children and so even childbirth was taken out of the hands of experienced midwives and given over to male doctors. Women however were not willing to be seen in labour by men so often gave birth without medical assistance. For one woman called Agnodice this was intolerable.

Agnodice cut off her hair, dressed as a man, and travelled to Alexandria to learn the medical arts. Back in Athens she continued to pretend to be a man so that she could practise medicine. To earn the trust of female patients Agnodice revealed her real sex to them. Soon she was taking most of the jobs out of the hands of her male colleagues. To stop their business drying up completely they brought Agnodice to trial.

The other doctors accused Agnodice of secretly seducing her female patients – that’s why they all wanted to be seen by her. To defend herself Agnodice simply took off her clothes and the charges of seduction were dropped. New charges of being a doctor while female were brought but Agnodice’s patients charged into court and demanded she be let off.[10]

10 Amazing Tales Of Women In Sieges