The top utilities regulator in Texas resigned Monday in the widening fallout from blackouts triggered by an unusually heavy and widespread winter storm that left millions in the state without power and water for days.

DeAnn Walker, the chairwoman of the Public Utility Commission, is the highest-ranking official to step down in the aftermath of one of the largest power failures in U.S. history.

Gov. Greg Abbott appointed Walker to the commission in 2017, and she is one of two commissioners who used to work in his office. She is also a former attorney and executive at CenterPoint Energy, one of Texas' largest electric retailers.

Abbott, a Republican, blamed the power failures on the state's grid manager, the Electric Reliability Council of Texas, commonly known as ERCOT. But the three-member commission appointed by Abbott has oversight authority over ERCOT. 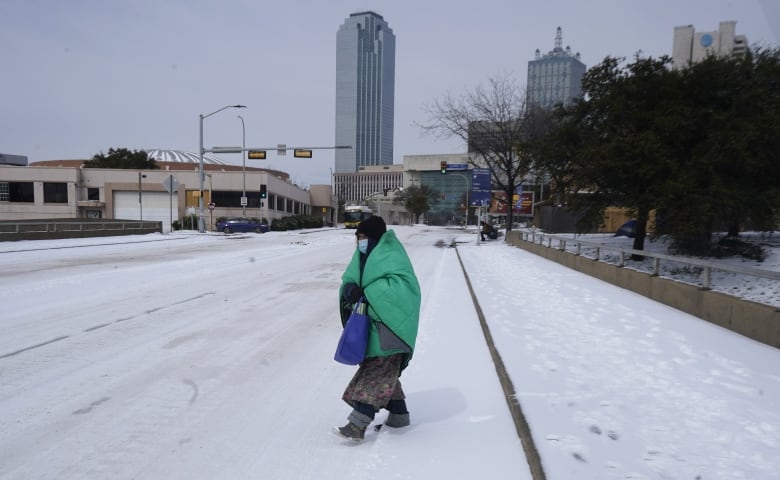 A woman wrapped in a blanket crosses the street near downtown Dallas on Feb. 16. More than 40 deaths in Texas — and double that toll regionwide — have been blamed on the storm and the resulting blackouts. (LM Otero/The Associated Press)

Walker struggled in two lengthy appearances before legislative panels investigating the state's electric grid breakdowns, the commission's response and the lack of communication with the public over the approaching storm.

She initially said her agency has little control over ERCOT, but later said it has total control. Lawmakers questioned her knowledge of her agency's authority and the decision to reduce or reassign enforcement staff charged with policing the utility companies.

She was also criticized for a lack of communication about the approaching catastrophic storm. Walker testified that she spoke with Abbott's office, as well as staff for Lt. Gov. Dan Patrick and others several days before the storm hit to warn them about the weather and its potential impact on power distribution in the state.

Texas was hit with historic snowfall and single-digit temperatures for days starting Feb. 14. More than 40 deaths in Texas — and double that toll regionwide — have been blamed on the storm and the resulting blackouts.

WATCH | In the days following the power outages in Texas, politicians haggled over who was to blame:

Millions of Texans are struggling to stay warm as power outages continue across the state, while politicians are looking to place blame for the systemic failure. 3:35

ERCOT officials have said the entire grid -- which is uniquely isolated from the rest of the U.S. -- was on the brink of collapse in the early hours of Feb. 15 as power plants froze in the cold and record demand for electricity to heat homes overwhelmed the system.

At least six ERCOT board members have resigned in the wake of the power failures.

The state's largest and oldest power co-operative said it received excessively high invoices from ERCOT for collateral and purported cost of electric service during the storm, and that it was not prepared to pass those costs along to its members or customers.

How big was the iceberg that broke off Antarctica?