Prime Minister Justin Trudeau is speaking with the European Union's two top political leaders Thursday, and they are expected to discuss their shared commitment to international co-operation and what that means ahead of Tuesday's U.S presidential election.

In a pandemic-free world, it would have been a formal summit, a followup to last summer's two-day affair that Trudeau hosted with one of Von der Leyen and Michel's predecessor, Donald Tusk.

That gathering was marked by gushing displays of Canada-EU political fealty that saw Trudeau and Tusk position themselves as defenders of a world order that has been increasingly under attack from U.S. President Donald Trump.

Now, in the COVID-19 world, Trudeau, Von der Leyen and Michel are poised to send the same signal.

Leaders to express support for WHO

A senior EU official in Brussels, who briefed The Canadian Press ahead of the talks on the condition they not be identified because they were not authorized to speak publicly, said the talks would affirm strong support for the United Nations World Health Organization.

Trump has threatened to withdraw U.S. funding from the WHO and derided the agency as being a puppet of China because, he says, it downplayed the severity of the early outbreak of COVID-19.

With the U.S. election taking place next week, the EU official said it will be important for the three leaders to demonstrate their shared support for international organizations, respect of human rights and support of free trade. 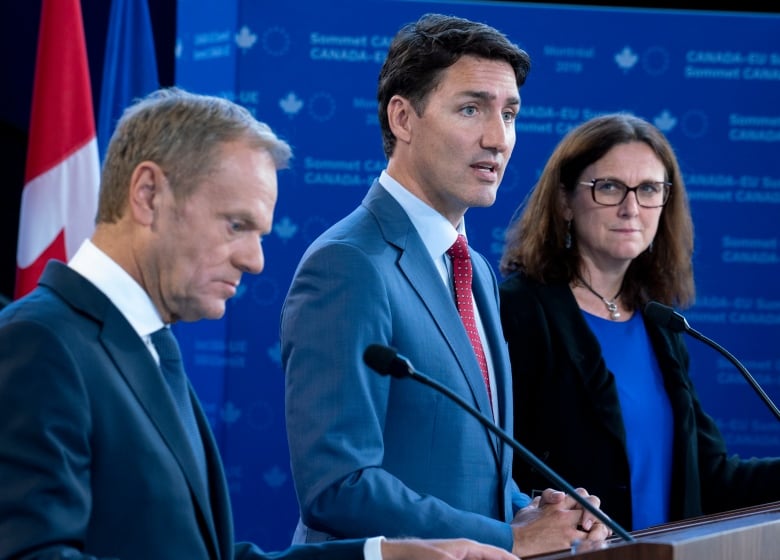 Former president of the European Council Donald Tusk and Cecilia Malmstrom, who was European commissioner for trade at the time, with Prime Minister Justin Trudeau at the Canada-EU summit in Montreal in July 2019. Trudeau will speak with European Union leaders Thursday in a follow-up to that summit (Paul Chiasson/The Canadian Press)

On trade, they will discuss the Canadian-led efforts to reform the World Trade Organization, a process known as the Ottawa Group, said the official.

Canada leads about a dozen like-minded countries in wanting to reform the WTO, but it has not invited the U.S. or China to participate. The Trump administration has followed through on a plan that has essentially disabled one of the WTO's main dispute settlement mechanisms, the appellate body.

Because the U.S. is the largest contributor to the WTO, it gets to appoint judges to the body, but it has failed to fill vacancies that have existed since December. The result has paralyzed the body because it doesn't have enough judges to hear disputes.

Trump has called the WTO "horrible" and unfair to the U.S. in settling trade disputes.

"Canadians benefit from an open, transparent, and rules-based international trade system with the WTO at its core," Ng said in a statement.

Canada and the EU have created their own ad hoc replacement body for the appellate body in the hopes of attempting to settle disputes.

Lawrence Herman, a Toronto-based international trade lawyer, said the initiative was a good try but that it hasn't replaced what Trump has undermined.

"It only works in a limited way," said Herman.

"It's a great idea, given what's happening in at the WTO, but it doesn't solve all problems."

The EU official said the three leaders would also be discussing the rising provocations posed by China.

At the EU's recent summit with China, the bloc highlighted the plight of imprisoned Canadians Michael Kovrig and Michael Spavor.

They were arrested nearly two years ago in what the Canadian government has interpreted as retaliation for Canada's arrest of Chinese high-tech executive Meng Wanzhou on a U.S. extradition order.

Canada welcomed the EU support for the release of Kovring and Spavor, which came in the final communique of its summit with China. The EU has joined dozens of other countries in supporting Canada's efforts in publicly calling for their release, a campaign that has angered China.

The EU official said the bloc wants to discuss how it can reinforce its partnership with Canada on dealing with China and defending human rights.

Pikmin 3 Deluxe review – An underrated and...

3 Rapper Ice-T Shares How His Father-In-Law Went From An...