Former U.S. president Donald Trump on Sunday hinted at a possible run for president in 2024, attacked President Joe Biden and repeated his fraudulent claims that he won the 2020 election in his first major appearance since leaving the White House nearly six weeks ago.

"Our movement of proud, hard-working American patriots is just getting started, and in the end we will win. We will win," Trump said in a speech at the Conservative Political Action Conference in Orlando, Fla.

Refusing to admit he lost the Nov. 3 presidential election to Biden, Trump offered a withering critique of his Democratic successor's first weeks in office and suggested he might run again. "They just lost the White House," the former Republican president said after criticizing Biden's handling of border security. "But who knows, who knows, I may even decide to beat them for a third time."

Trump's tumultuous final weeks in office saw his supporters launch a deadly attack on the U.S. Capitol on Jan. 6 in an attempt to block Congress from certifying Biden's election victory, a win that Trump falsely claimed was tainted by widespread fraud.

A civil war has erupted within the Republican Party, with establishment figures such as Senate minority leader Mitch McConnell eager to put Trump in the rearview mirror, and others, such as Trump ally Sen. Lindsey Graham, believing the party's future depends on the energy of the pro-Trump conservative base. 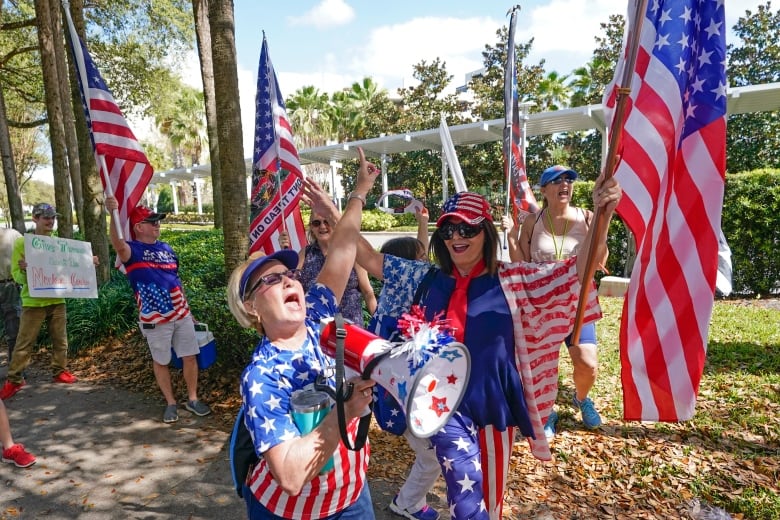 Trump declared that the Republican Party is united and said he had no plans to try to launch a third party — an idea he has discussed with advisers in the last couple of months.

"We're not starting new parties. We have the Republican Party. It's going to be united and be stronger than ever before. I am not starting a new party," he said.

The results of a straw poll of CPAC conference participants gave Trump a strong show of support, with 55 per cent saying they would vote for him in the 2024 Republican presidential nomination race. Florida Gov. Ron DeSantis came in second place with 21 per cent.

Without Trump, DeSantis led the field with 43 per cent, while other potential Republican candidates had single digits. 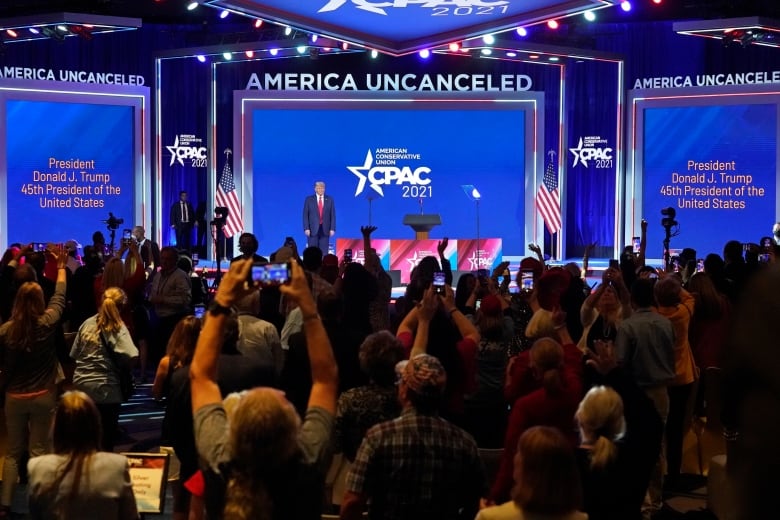 Supporters cheer and wave as Trump is introduced at CPAC on Sunday. (John Raoux/The Associated Press)

"It's tough to get seven out of 10 to agree on anything," pollster Jim McLaughlin told CPAC in explaining away the results.

Still, Trump fervour at the four-day CPAC event has been so strong that Trump's eldest son, Donald Trump Jr., declared it "T-PAC," and participants rolled out a golden statue of the former president. 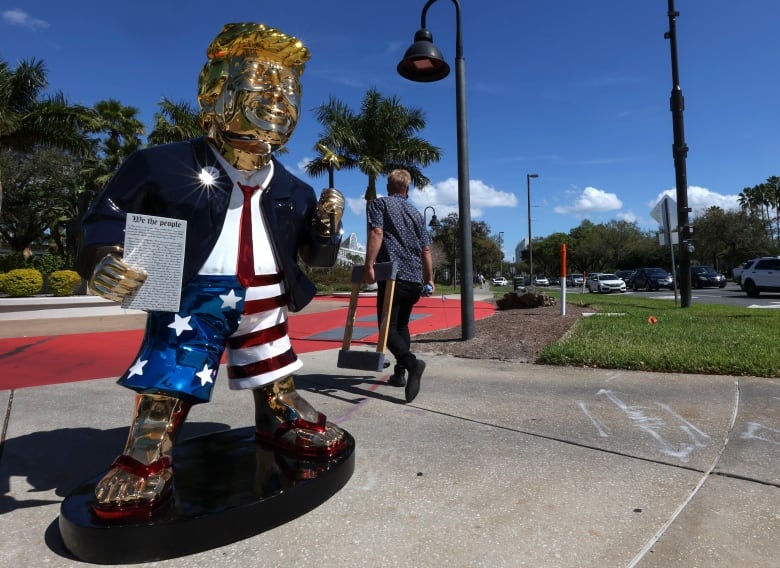 A golden Trump statue is seen across the street from CPAC on Sunday. (Sam Thomas/Orlando Sentinel via The Associated Press)

"Hello CPAC, do you miss me?" Trump said.

Trump's flirtation with another run could freeze the Republican field for 2024 as other potential candidates try to decide whether they will have to compete against him. Many of those 2024 possible candidates spoke during the CPAC event.

An hour into his speech, Trump dove deeply into his unfounded claims of election fraud, going against the advice of confidants who believe he needs to look to the future.

"We have a very sick and corrupt electoral process that has to be fixed immediately. This election was rigged," Trump said. "And the Supreme Court and other courts didn't want to do anything about it."

"You won! You won!" the crowd shouted. Trump's campaign and his supporters brought dozens of failed lawsuits attempting to overturn the results of the 2020 election, which Biden won by more than seven million votes.

In the short term, Trump is making plans to set up a super PAC political organization to support candidates who mirror his policies, an adviser said.

Starting his speech more than an hour late, Trump said he wanted to save the culture and identity of the United States.

He sought to position himself as the lead critic of the new president, including on immigration and security along the U.S. border with Mexico and the slow reopening of schools closed due to the pandemic.

"Joe Biden has had the most disastrous first month of any president in modern history," Trump said.

Recent polls have given Biden a job approval rating well past 50 per cent, a strong showing from Americans.

The Biden White House has made it clear it plans to ignore Trump's speech.

"Our focus is certainly not on what president Trump is saying" at CPAC, White House spokesperson Jen Psaki told reporters last week.