Officials across the U.S. pleaded with Americans to curb their enthusiasm for large Fourth of July crowds Saturday even as U.S. President Donald Trump enticed the masses with a "special evening" of tribute and fireworks staged with new U.S. coronavirus infections on the rise.

People wandered the National Mall in baking heat and took shade under the scattered trees while, not far away, music wafted from a party on the White House South Lawn. To come: the "Salute for America" celebration with Trump's speech from the White House grounds, a military air show and a more ambitious fireworks display than has been seen in years.

The crowds on the Mall were strikingly thinner than the one gathered for last year's jammed celebration on the National Mall. Many who showed up wore masks.

But not Pat Lee of Upper Dublin, Pa., or the two friends she came with, one a nurse from Fredericksburg, Va., whose only head gear was a MAGA hat.

"POTUS said it would go away," Lee said of the pandemic, using an acronym for president of the United States. "Masks, I think, are like a hoax." But she said she wore one inside the Trump International Hotel, where she stayed. 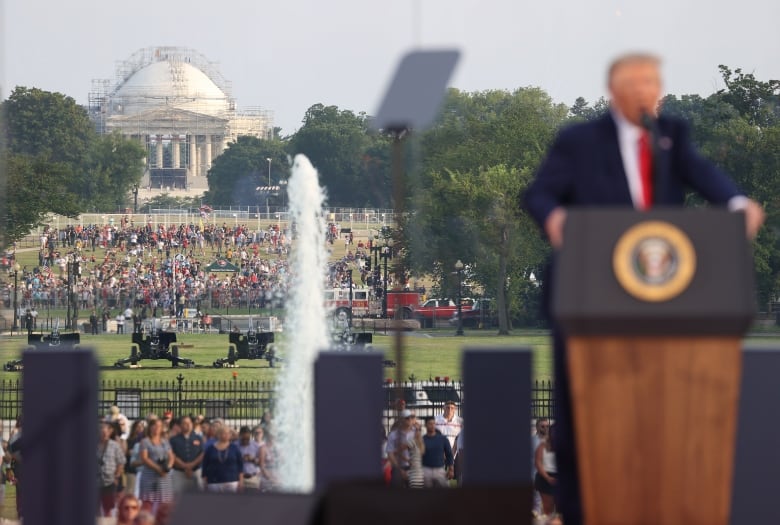 People are seen on the National Mall as Trump speaks during an event on the South Lawn of the White House on Saturday. (Tasos Katopodis/Getty Images)

By the Second World War Memorial, the National Park Service handed out packets of five white cloth masks to all who wanted them. People were not required to wear them.

Another nurse, Zippy Watt from Riverside, Calif., came to see the air show and fireworks with her husband and their two daughters, one of whom lived in Washington. They wore matching American flag face masks even when seated together on a park bench.

"We chose to wear a mask to protect ourselves and others," Watt said. She said her family was divided on Trump but she is "more of a Trump supporter. Being from southern Cali I see socialist tendencies. I'm tired of paying taxes so others can stay home."

At the White House, several hundred invited guests assembled on the sweeping South Lawn, gathering around tables decorated with flowers and small U.S. flags as a military rock band played. Most guests were unmasked.

Trump's guests were doctors, nurses, law enforcement officers and military members as well as officials from the administration, said Judd Deere, deputy White House press secretary. He said the event was a tribute to the "tremendous courage and spirit" of front-line workers and the public in the pandemic. 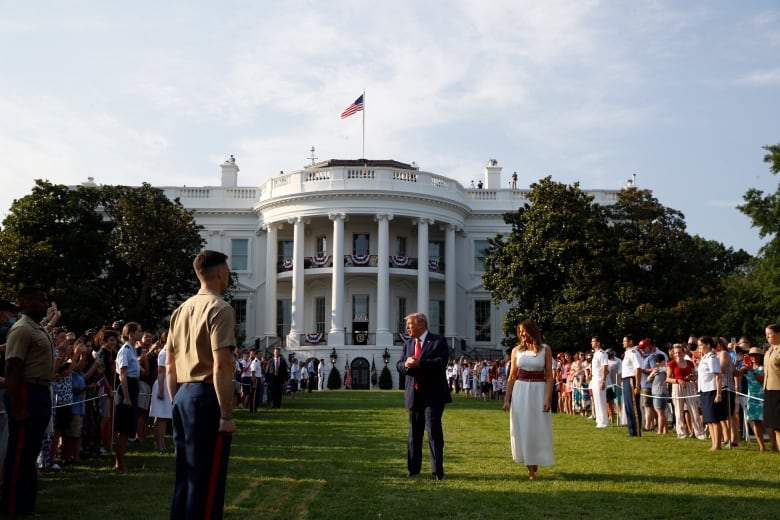 Trump and his wife Melania Trump are seen on the South Lawn of the White House on Saturday. (Patrick Semansky/The Associated Press)

In many parts of the country, authorities discouraged mass gatherings for the holiday after days that have seen COVID-19 cases grow at a rate not experienced even during the deadliest phase of the pandemic in the spring.

Yet Trump continued to crave big crowds when it came to his events.

He opened the holiday weekend by travelling to Mount Rushmore in South Dakota for a fireworks display Friday night near the mountain carvings of George Washington, Thomas Jefferson, Abraham Lincoln and Theodore Roosevelt. In stark words, he accused protesters who have pushed for racial justice of engaging in a "merciless campaign to wipe out our history."

Even as he pushed ahead with celebrations, the shadow of the coronavirus loomed closer to him. Kimberly Guilfoyle, a top fundraiser for the president and girlfriend of his eldest child, Donald Trump Jr., tested positive for the virus, Trump's campaign said late Friday. Guilfoyle tweeted Saturday that she was looking forward to "a speedy recovery."

In a presidential message Saturday on the 244th anniversary of the adoption of the Declaration of Independence, Trump acknowledged that "over the past months, the American spirit has undoubtedly been tested by many challenges."

His Democratic rival, Joe Biden, said in a statement that the U.S. "never lived up" to its founding principle that "all men are created equal," but today "we have a chance to rip the roots of systemic racism out of this country."

This Fourth of July, one of the most patriotic things you can do is wear a mask.—@JoeBiden

Trump planned to use the speech to salute the U.S. military and pay tribute to American values, heroes and accomplishment, according to a Trump aide who was not authorized to comment by name. The aide added that Trump sought to use the speech to contrast his outlook with Biden's remarks suggesting that America has not always lived up to its ideals.

Trump's endorsement of big gatherings at the National Mall and at Mount Rushmore came as many communities decided to scrap fireworks, parades and other holiday traditions in hopes of avoiding yet more surges in infection.

Confirmed cases are climbing in 40 states, and the U.S. set another record Friday with 52,300 newly reported infections, according to the tally kept by Johns Hopkins University.

WATCH | Independence Day celebrations a concern U.S. where cases are on the rise:

As new daily cases in the U.S. hit a record, concerns abound that July 4th celebrations will lead to an explosion of COVID-19 cases as people scoff at masks and physical distancing. 2:01

The Centers for Disease Control and Prevention cautions that mass gatherings like the one scheduled for Washington present a high risk for spread of the virus. Yet Surgeon General Jerome Adams sidestepped when asked if he would caution a loved one against attending a large gathering. He said people should wear masks and otherwise make up their own mind.

Trump has been aching to see the nation return to normalcy, and has been willing to push the envelope farther than many states and big city mayors are willing to go.

District of Columbia Mayor Muriel Bowser said she didn't have the right to shut down the holiday spectacle because it's on federal land. But she warned the federal government about the dangers of such a large crowd and told her constituents: "Just because someone invites you to a party doesn't mean you have to go."

The Most Faithful Zodiac Signs In Astrology,...

9 Tesla is reportedly close to making a more affordable...

10 Microsoft says it's aiming to close TikTok deal by...