Wednesday is expected to be an explosive and historic week with the first public hearings for an impeachment inquiry into U.S. President Donald Trump set to begin.

But while many turned their eyes to Trump for his response, the U.S. president's campaign team was already raking in record-breaking political donations.

Trump is the fourth U.S. president to face a formal impeachment inquiry, but he is the first in the age of social media. And his campaign team has used the online communications platform to rally support — both politically and financially.

For the Republicans, this inquiry is a massive fundraising opportunity, says Republican strategist Jai Chabria.

"If you think of the Internet as an ATM machine, impeachment is the PIN code," said Chabria.

"They are making money hand over fist on the fact that the Democrats are going to try to impeach."

In the driver's seat is Brad Parscale, Trump's digital media director, who led the efforts to raise a record-breaking $125 million US in just the last quarter, according to the New York Times.

His ability to turn impeachment into this many millions is unprecedented. But the financial success didn't come without significant spending either.

According to researchers at New York University, the campaign spent up to $2 million on ads that ran on Facebook in the first week following the announcement of the inquiry. Those ads were viewed between 16 and 18 million times. 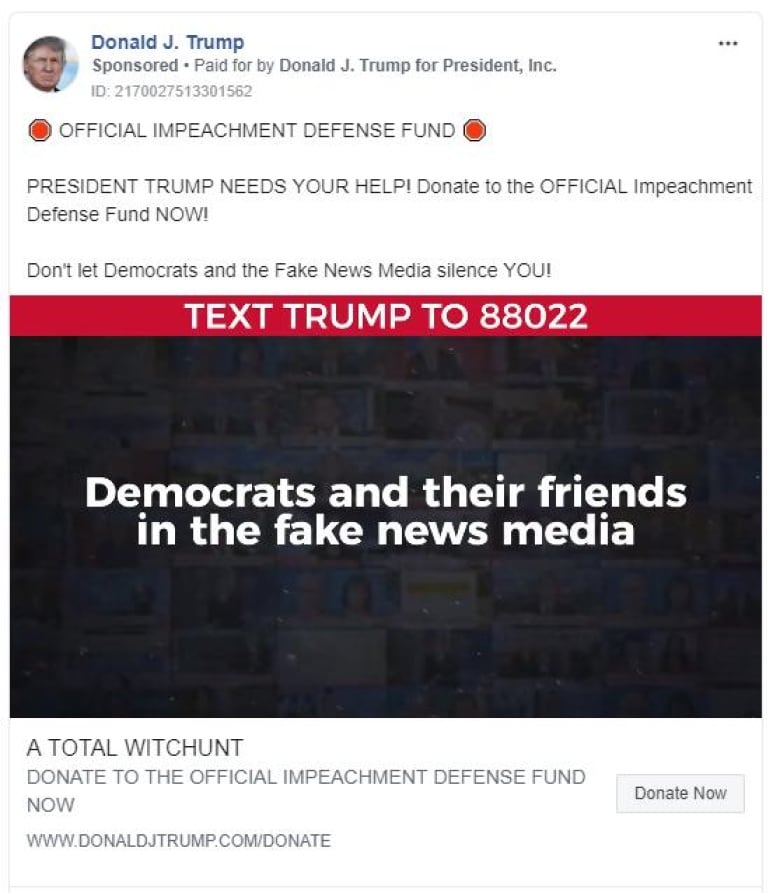 And while the ads did well on social media, the campaign also took its anti-impeachment ads to television.

Multiple U.S. media outlets reported that one of those ads — part of a $10-million ad buy — was aired during the final game of the World Series. With the help of Trump's tweets, it was viewed over three million times.

Game 7 World Series ad, 1 year out. #WeAreComing and fighting for the forgotten Americans.

"He's no Mr. Nice Guy, but sometimes it takes a Donald Trump to change Washington." pic.twitter.com/DSqh6RpaGt—@parscale

Much of the success of these fundraising efforts come from the changed landscape in the U.S. Chabria explains that now, American politics is about appealing to your base — a shift that's only about a decade old.

Social media has allowed communication between a politician and their base to be direct, ultimately bypass the middle-man: mainstream media.

And with retweeting and sharing options, messages can quickly be amplified.

"People are tending to listen only to their social media bubble, much more now," said Paul Rosenzweig. He is a Republican strategist who worked during former U.S. President Bill Clinton's impeachment inquiry.

"You listen to Twitter and see in it what you already believe, in part, because you listen to people repeat back what you believe … But also because when you see something that's contrary, you discount it as coming from someone that you don't believe."

Hearings are scheduled for Wednesday and will be broadcast live on CBC News Network.

Could artificial volcanos solve the e-waste...