Home /
News /
Trump's defenders emboldened by their certainty of a win

Trump's defenders emboldened by their certainty of a win

"Why should this trial be different than any other trial?" asked U.S. Rep. Adam Schiff as he opened the Democrats' case for convicting the president and removing him from office. "The short answer is, it shouldn't."

But of course Schiff knows that politics assures the impeachment trial will be different, and in the most important ways.

With the Senate trial of Donald Trump underway, Democrat Adam Schiff warns the system of checks and balances is at stake. 1:12

The Republican Senate Majority Leader, Mitch McConnell, drafted rules for the trial that allowed the possibility there might be no witnesses heard and no evidence presented even from the House investigation that produced the articles of impeachment that form the basis for the prosecution.

On Tuesday, on the first day of the trial,Republicans rejected three Democratic efforts to obtain documents and evidence.

A trial without witnesses and evidence is not a trial, the Democrats complain — a seemingly compelling argument on the face of it. But the Senate is not a courtroom, and McConnell is proud to say the majority of his "jurors" are in lockstep with the White House to assure an acquittal.

And that's the crucial distinction between any other trial and the Senate's trial of Donald Trump. The verdict is effectively already in: Democrats need 67 votes to convict and they don't have them — they're 20 short.

That's a battle about whether the public will perceive the seemingly inevitable acquittal of Trump as justice or a sham. It's about what Americans are allowed to see and to hear to help them make up their own minds about whether to remove the president from office when they have that chance in November's election. 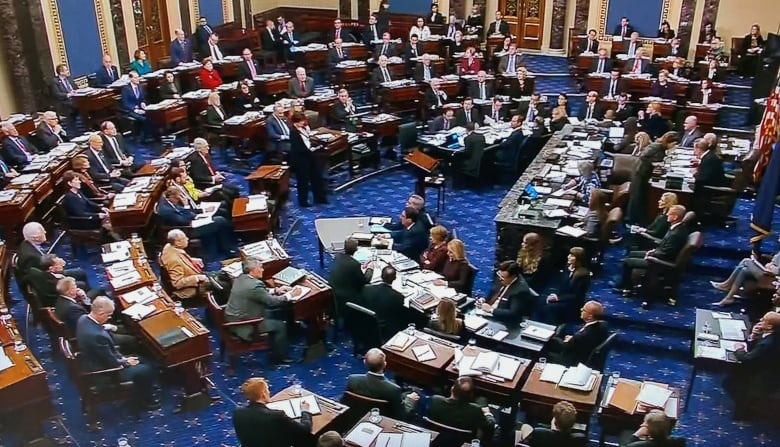 The U.S. Senate votes to table an amendment by Minority Leader Chuck Schumer seeking documents and evidence from the White House in this frame grab from video shot in the U.S. Senate Chamber Tuesday. (U.S. Senate TV via Reuters)

With no easily imagined way to lose the case, Trump's defenders seem emboldened to embrace some brazen tactics, like using the platform of the trial to spread demonstrably false, easily discredited claims.

"The president has done nothing wrong," White House counsel Pat Cipollone assured everyone in his opening statement for the president's defence Tuesday. "There is absolutely no case," he said.

That's certainly the president's position. But Cipollone knows that it's officially untrue that the president did nothing wrong.

A report last week from the Government Accountability Office (GAO), a non-partisan congressional watchdog, said the president flat out broke the law. It said he violated the Impoundment Control Act when he directed a freeze on nearly $400 million of military aid to Ukraine that Congress had approved — the exact thing at the very heart of the impeachment case.

Cipillone also repeated a false characterization of the House intelligence committee's investigation of Trump when he said Democrats held secret meetings in a basement office on Capitol Hill.

It's true neither the public nor the media were invited to those meetings, but that hardly makes them secret. Some 48 Republican members of Congress had access to the meetings and were allowed to ask questions, nine of them sitting on the committee itself. The testimony and evidence they all saw and heard — the Republicans included — they all kept secret, as they are routinely required to do in those circumstances.

There was one truly secret detail about the House investigation: The ranking Republican on the intelligence committee, Devin Nunes, was apparently personally involved in the Ukraine scandal and didn't tell anybody. It seems he and a member of his staff were secretly active players in what Nunes nevertheless publicly dismissed as nothing but a "hoax" while he sat on the committee hearings about it.

That inconvenient little bombshell was alleged by Lev Parnas, a small-time operator and indicted (for campaign finance schemes) former associate of the president's personal lawyer, Rudy Giuliani. Parnas unexpectedly started blabbing to the media in lengthy interviews last week, and he had a lot to say. 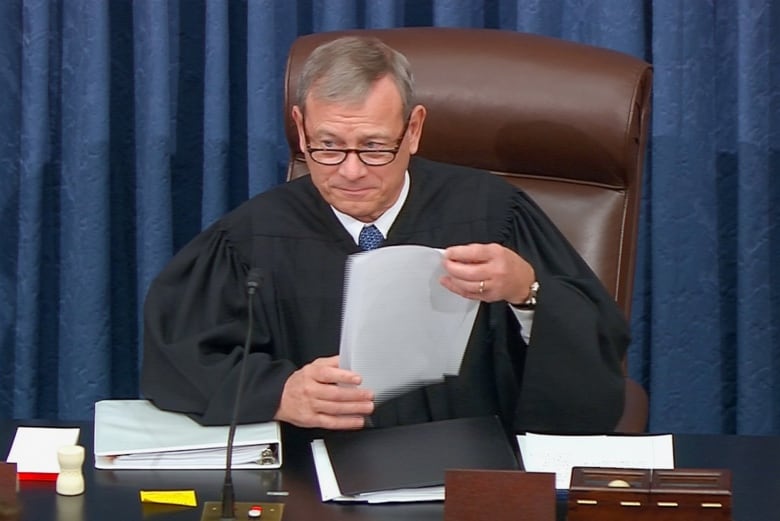 If the Trump team hadn't been so sure that the Senate trial was a lock, they might have worked harder to get to the bottom of the story so they'd be better prepared to contain the blast when the former Giuliani conniver turned against them.

Parnas — until recently a supporter of Trump — described a broad conspiracy to lean on Ukraine's President Volodymyr Zelensky and extort political favours from him to help re-elect Trump in November. He tied the conspiracy directly to Trump, Attorney General William Barr, and Nunes, among others, and he produced documentary evidence.

Both the president and Nunes have said they hardly know Parnas. But photographs of Parnas with the president, and the fact Parnas seems to have Nunes's cellphone number, argue otherwise.

The White House brushed it all aside with a comment about Parnas's criminal indictment and a suggestion he can't be trusted to tell the truth.

But this is the risk of Trump, and Republicans have known it since the beginning: They have no idea from one day to the next what they might be called upon to defend.

Now, and with the spotlight on them, there really is no telling what they might be asked to swallow in this unique trial that Trump and his team believe they can't possibly lose, no matter the evidence.

Key things to watch for in the coronavirus...

Met Éireann state there's a 'risk of sleet and...