Home /
News /
Trump's impeachment drama is not that different from Nixon's

Trump's impeachment drama is not that different from Nixon's

While there's huge interest in the public impeachment hearings set to begin next week in the U.S. Congress, they'll have a tough time topping the monster ratings and classic political soundbites produced by Watergate in the early 1970s.

A TV critic with the L.A. Times in 1973 called those hearings the best thing to happen to public television since Sesame Street. It was such a hot-ticket event that the list of spectators angling for seats in the public gallery included John Lennon and Yoko Ono.

Ample attention has been lavished on how different this era is from Watergate — which is understandable, given how remote the chances seem of U.S. President Donald Trump being forced to resign by members of his own party, the way Richard Nixon was.

But there are numerous parallels between the eras — televised impeachment hearings are just one item on that list.

Here are seven similarities illustrating that even when history doesn't quite repeat itself, it can still rhyme:

With his Republican White House beset by investigations into the 1972 break-in at Democratic Party headquarters inside D.C.'s Watergate complex, Nixon dangled the possibility of pardons in an effort to keep witnesses from talking. He signalled through aides his willingess to use the presidential pardon power to help the Watergate suspects who stayed silent.

Trump has employed the same playbook, according to the report by special counsel Robert Mueller into Russian interference in the 2016 U.S. election. Trump has already pardoned political allies, denounced co-operative witnesses as "rats" and repeatedly refused to rule out pardoning former campaign aides Paul Manafort and Michael Flynn.

The Mueller report said the evidence suggests Trump wants witnesses to believe he'll protect them if they get in trouble and refuse to co-operate with investigators or authorities.

When Nixon heard from an aide that it might cost $1 million US to keep witnesses quiet, he replied that he knew where he could get that money in cash. A Watergate grand jury named Nixon an unindicted co-conspirator and sent evidence to Congress, unsealed last year, showing the president's awareness of efforts to pay off witnesses. 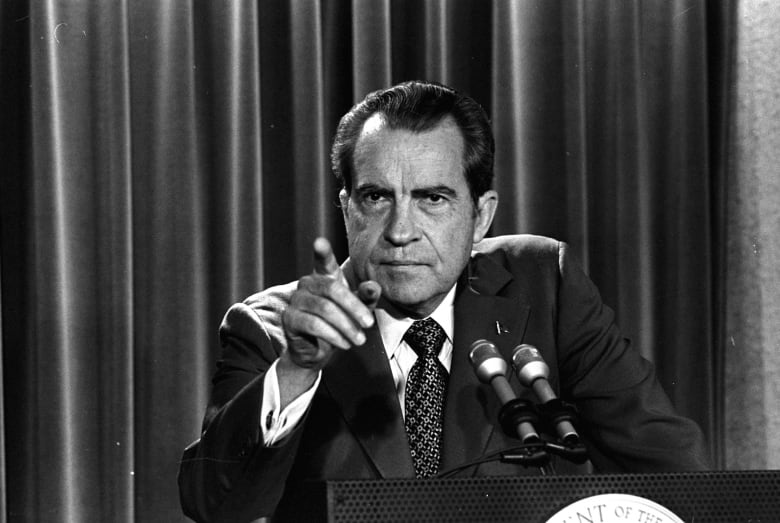 Nixon, seen here in 1973, remained popular with a segment of the U.S. population even after resigning. (Charles Tasnadi/The Associated Press)

In the book Impeachment: An American History, Canadian-born historian Timothy Naftali writes that during the Nixon era, when, unlike now, Democrats controlled both the House of Representatives and the Senate, senior members of the party resisted impeachment for months.

Democratic leaders such as House Speaker Carl Albert and Majority Leader Tip O'Neill pushed back against intense pressure from liberals who wanted to launch proceedings. (They "found ways to keep the dogs of impeachment well leashed," Naftali writes.)

But the public mood turned after the so-called Saturday Night Massacre in October 1973, and Democrats followed suit. Even then, they sought to keep the process contained. Leadership entrusted control to the mild-mannered head of the House judiciary committee, New Jersey congressman Peter Rodino, and it stiff-armed efforts from progressives who wanted to add lines of inquiry well beyond Watergate (such as the war in Vietnam).

WATCH | 'What did the president know and when did he know it?': One of the most famous quotes to come out of the Watergate hearings was uttered by Howard Baker, the Republican co-chairman of the Senate committee holding the hearings:

Current House Speaker Nancy Pelosi's reluctance to launch impeachment proceedings against Trump is well documented. The House speaker called the idea too divisive and spent months resisting demands for it from her party colleagues. That changed with revelations suggesting Trump tried to bully Ukraine into investigating his potential election rival, Joe Biden and his son Hunter in exchange for U.S. aid.

Pelosi changed her tune, accusing Trump of betraying the country, undermining its elections and breaking his pledge to uphold the nation's laws by withholding funds approved for Ukraine. 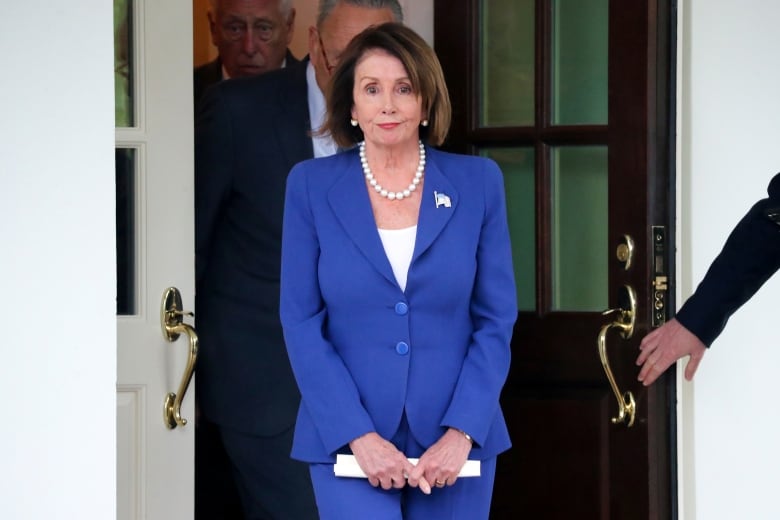 House Speaker Nancy Pelosi, the top Democrat in the House, resisted calls for an impeachment probe until recently. (Jonathan Ernst/Reuters)

Nixon flipped his lid on the aide who flipped. When his White House counsel, John Dean, began co-operating with investigators, Nixon ordered aides to "draw the sword" on him and slam him as a "traitor" and "turncoat" and do it in a "brutal" fashion. Dean got so much hate mail and so many death threats that the Witness Security Program of the U.S. Marshals Service guarded his house for over a year.

"He literally had to go into the witness-protection program," said Dean's friend James Robenalt, a presidential historian and lawyer who partners with Dean in delivering lectures on Watergate. "They went after him hammer and tong to try to discredit him." John Dean was White House counsel to Nixon before he agreed to co-operate with Watergate investigators. He testified before the House judiciary earlier this year at hearings into the Mueller report on Russian interference in the 2016 U.S. election. (Pablo Martinez Monsivais/Associated Press)

Trump has tweeted at least 55 times about the whistleblower who raised concerns about the president's call with Ukrainian President Volodmyr Zelensky and demanded numerous times that his identity be revealed. The president's son tweeted an article purporting to reveal the identity.

A Trump ally, Sen. Rand Paul, is threatening to reveal the whistleblower's name. Trump-friendly media have pointed out that the whistleblower's lawyer detests the president and tweeted two years ago about impeaching him. Trump has also levelled milder threats against a member of his White House staff, Alexander Vindman, who testified in the Ukraine congressional probe.

Naftali writes in his book that Nixon's game plan was to pretend to co-operate with the House probe. In the meantime, Nixon's team was working to undermine it, putting pressure on House Democrats to wrap up the process, claiming it was hurting the economy and fighting the release of documents all the way to the Supreme Court.

Nixon wrote to one aide in March 1974 that the affair was primarily a public relations fight, not a legal one, and the winner would determine the impeachment outcome. 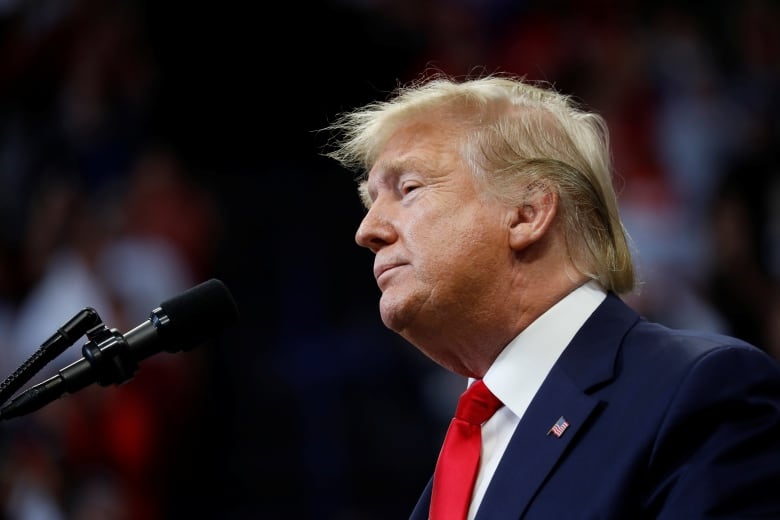 As with many political matters during his presidency, Trump has resorted to Twitter to try to discredit investigations into his conduct. (Yuri Gripas/Reuters)

Trump is overtly dismissive of the impeachment probe, and a number of Trump allies have refused to testify. The strategy of discrediting while co-operating slightly could describe his approach to the Russia probe. The Mueller report lists 11 ways the president tried to undermine the investigation.

Trump has warned that impeachment will hurt the economy and now says his fight against the impeachment probe will probably wind up as a Supreme Court case. Legal analysts say several disputes over whether documents related to Trump and his adminisration must be released to Congress, including his taxes, are heading for the high court.

CIA and FBI in the mix

Intelligence and law-enforcement agencies got pulled into the Watergate affair. Nixon was ultimately done in by the "Smoking Gun Tape," a recording in which he's overheard plotting to have the CIA warn the FBI to back off the Watergate investigation, using the pretext that it would uncover the secrets of CIA operative-turned-Watergate plotter Howard Hunt.

Support for Nixon disappeared with the release of that tape, and he resigned three days later.

Trump insists his political problems started with the CIA. He accuses former CIA director John Brennan of using unfair tactics to launch the Russia investigation. Trump's effort to push back on the idea that Russia helped him in 2016 was a key theme in his conversation with Zelensky. It's actually what Trump was talking about when he asked Zelensky for "a favour" — and it could lead to his impeachment. Trump also fired the head of the FBI, James Comey. 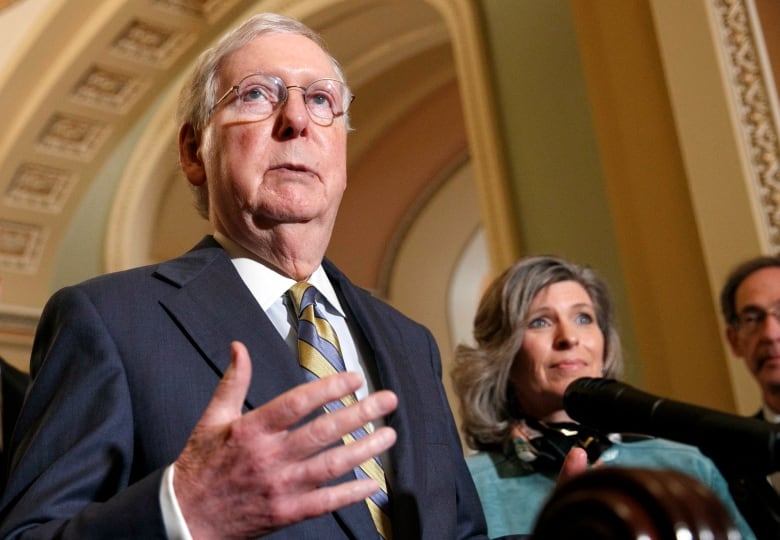 If Trump is impeached by the Democratic-led House of Representatives, the matter would move to the trial phase in the Senate, where Republican Mitch McConnell controls a majority. Democrats would need the votes of at least 20 Senate Republicans to remove Trump from office. (Jacquelyn Martin/The Associated Press)

When the scandal first erupted, Nixon had rock-solid support from Republicans. The polling agency Gallup says its data shows a mere six per cent of Republican supporters wanted Nixon impeached in June 1973, after public hearings had begun. ("Very similar to Trump," said Jeff Jones, senior editor at Gallup, in a recent interview.)

That grew to 12 per cent by December, 20 per cent by June 1974 and 31 per cent in early August, when Washington Republicans told Nixon he'd have to quit or be impeached. His support had also tanked among independents, and Republicans were worried about the impending midterm elections. 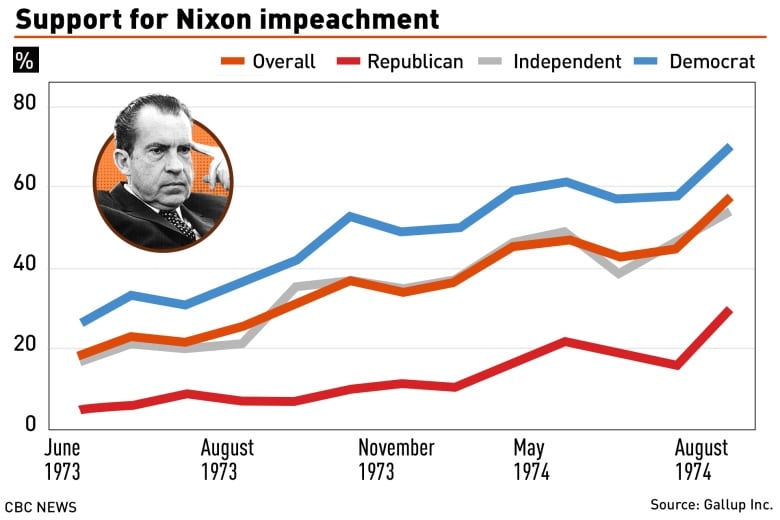 Polls have shown independent voters turning on Trump, and their votes will matter in next year's election. But Republicans, who control the Senate, control the impeachment outcome, and Republican voters haven't budged.

Republican support for impeaching Trump showed some sign of growing with news of the Ukraine scandal, but it's settled at just over 10 per cent. Removing Trump from office, if he's impeached by the Democratic-led House of Representatives, would require about 20 votes from Republicans in the Senate, where an impeachment trial would take place. There's no sign of that happening.

Not a single Republican voted to launch the impeachment process in the House last week.

Impeachment is the political process of removing from office certain elected or public officials accused of wrongdoing. The process is more difficult than you might think. 2:01
trump impeachment drama different nixon

2 The White House made a propaganda video about the...

5 German Man Identified As Suspect In Case Of Missing UK...

6 HBO Max's Most Popular Show Revealed And It's Not Game Of...

9 BLM Protest Signs Are Being Compared To Ridiculous...