As U.S. President Donald Trump leaves office, the Arctic is probably far from the minds of most Americans.

Yet the region, where the U.S. is one of five nations with territorial waters, has loomed surprisingly large in the waning days of his presidency.

After just four years as president, Trump's legacy in the Arctic might be greater than many would expect. Experts say he has endangered, if not unravelled, decades of environmental regulation and careful diplomacy.

Greenland: not for sale

If people remember anything about Trump's Arctic policy, it will likely be the bizarre idea to purchase Greenland that he discussed with his aides in the summer of 2019.

Greenland, an autonomous territory within the kingdom of Denmark, has hosted U.S. troops since the Second World War. But it was decidedly not for sale. Since 2009, it's been formally working toward independence.

"It's not a country that you just talk about as if it is a piece of merchandise," said Aleqa Hammond, the chair of Greenland's parliamentary foreign and security policy committee and one of the people working to draft a constitution for an independent Greenland. 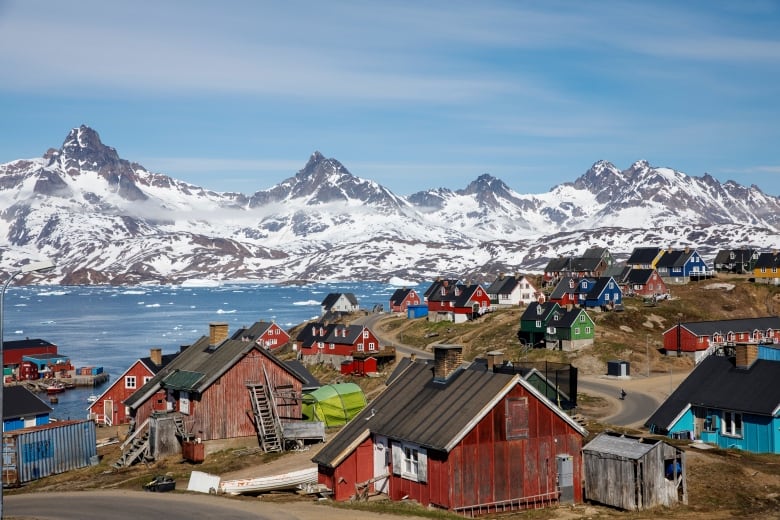 A view of Upernavik in western Greenland. In 2019, Trump offered to purchase Greenland from Denmark, a suggestion met with widespread derision. (Ritzau Scanpix/Linda Kastrup/Reuters)

Trump's suggestion was met with widespread derision and even caused a diplomatic spat with Denmark. The overall effect, Hammond said, was "at least one or two steps back" for the U.S. reputation in the Arctic.

"It's not that the United States [has] not engaged in these sorts of conversations over the course of our history — we all have," said Rufus Gifford, a former U.S. ambassador to Denmark and the deputy campaign manager for president-elect Joe Biden.

"But the way in which … [Trump's] administration went about this was reckless."

The U.S. under Trump quickly pivoted to more traditional methods of exerting power, giving Greenland $12 million for economic development and opening the first U.S. embassy in the capital, Nuuk, in more than half a century.

But the episode undermined U.S. standing in Greenland just as it sought to become an Arctic power in its own right.

"Greenland wants international co-operation, regardless of whether it's the United States or not," said Hammond. "The Arctic must be very aware about the agenda behind the Americans' interest … and be sure that the Arctic people are the ones to decide in the end if this should be or not." 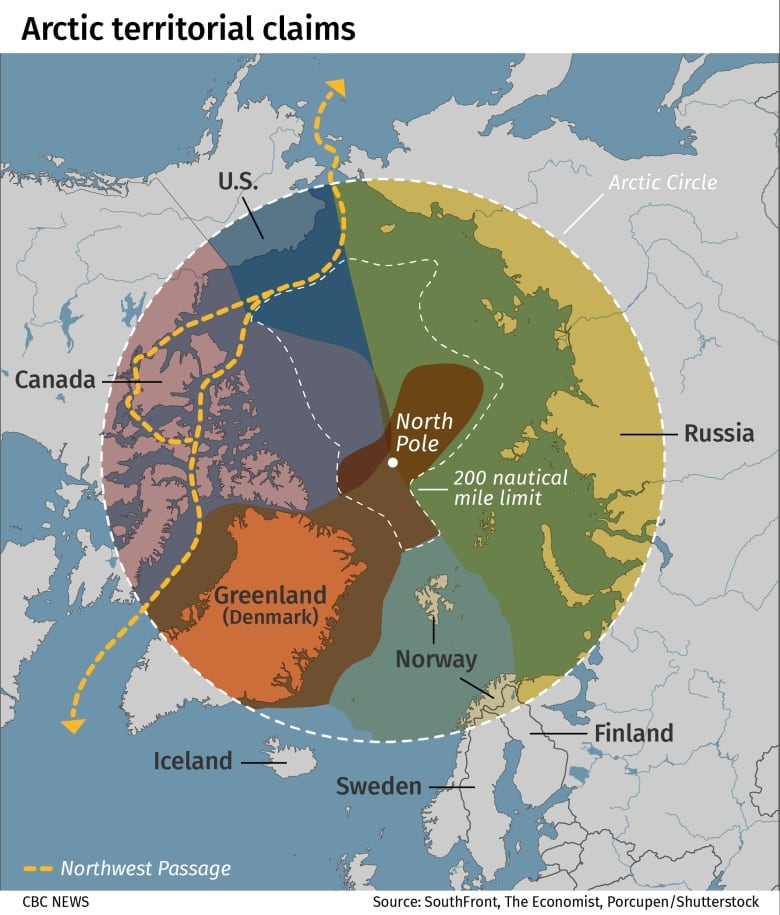 Readying for a fight

Trump's interest in Greenland might have seemed out of left field, but it highlighted the Arctic as "one of the most important centres in defence matters," Hammond said.

Greenland is home to Thule Air Base, one of the U.S.'s most strategically important installations. The island's land mass covers 20 per cent of the Arctic, and it's located within a crucial gap between Russia and the north Atlantic that was heavily monitored during the Cold War. 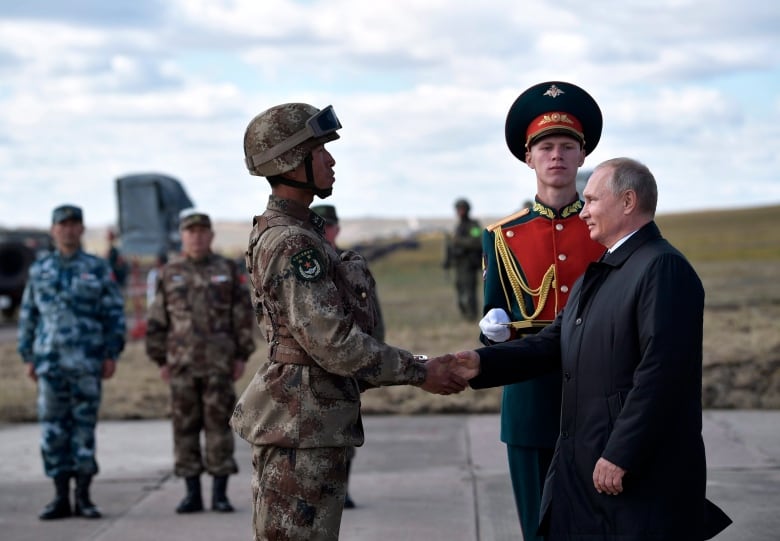 Russian President Vladimir Putin, right, shakes hands with a Chinese serviceman during the Vostok military exercises in September 2018, which spanned vast expanses of Siberia and the Far East and the Arctic. (Alexei Nikolsky, Sputnik, Kremlin Pool Photo via AP)

"The Russians right now are building their air base just 1,000 kilometres away from Thule region," Hammond said. "That requires America to be a stronger presence in Greenland than they ever have before."

The Pentagon seems to agree. Under Trump, it initiated a "U.S. pivot to the Arctic," according to Andrea Charron, director of the Centre for Defence and Security Studies at the University of Manitoba in Winnipeg.

By the end of this year, all branches of the U.S. military will have new Arctic strategies, with possible implications for Canada.

Previously, U.S. Arctic strategy focused on "co-operation and environmental security issues," according to Rob Huebert, a professor of political science at the University of Calgary.

"Quite clearly, the major concern for the Americans now is … the growing power of Russia and the growing interest of China in the region," he said.

Charron agrees that the attitude toward Russia's presence in the Arctic is one area where Trump's influence is visible.

"It's put Russia in the Arctic as an adversary, and that wasn't the language of before," she said.

The new strategies even include the threat of "freedom of navigation operations," which are military exercises aimed at provoking disputes over Russian territorial claims to the northern sea route — and, potentially, Canada's claims to the Northwest Passage.

That was matched by aggressive rhetoric from Trump's secretary of state, Mike Pompeo, which challenged longstanding territorial claims and prompted an official rebuke from the Canadian branch of the Inuit Circumpolar Council for treating Inuit homelands as little more than a military chessboard. 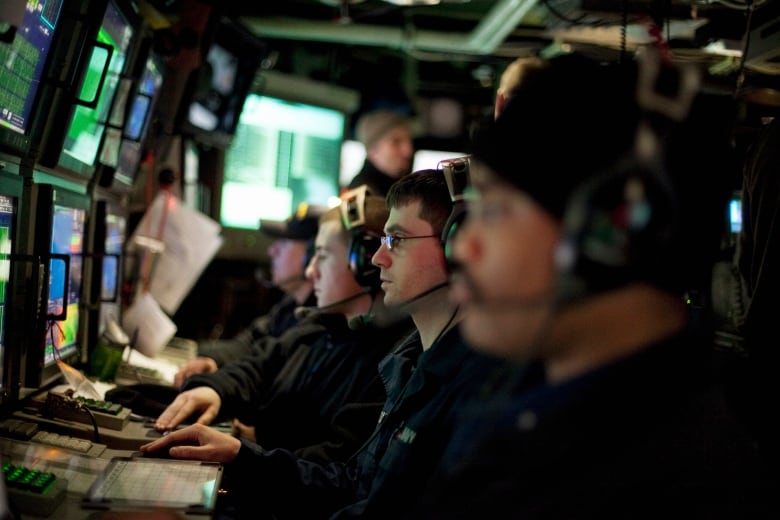 U.S. Navy sailors watch sonar screens aboard the submarine USS New Hampshire as the ship participates in exercises underneath ice in the Arctic Ocean. (Lucas Jackson/Reuters)

Canada has remained steadfast in claiming the Northwest Passage as its territorial waters (having pursued a Kiwi sailor for an allegedly illegal transit as recently as last year).

But the realities of a "blue Arctic," with its open waterways and increased marine traffic, mean it's not just the U.S. that is preparing for confrontations with foreign powers to become a "day-to-day" part of operating there.

"Not all of this can be attributed to Trump," Charron said, with both Canada and NATO realizing that Russian and Chinese actions in the Arctic "are highly problematic."

Though Canada's Arctic and defence policies don't name adversaries the way the Americans do, both call for an increased military presence in the Arctic. Canada is investing in its navy, holding regular Arctic military exercises and entertaining closer collaboration with NATO to monitor Canadian waters, Charron said. 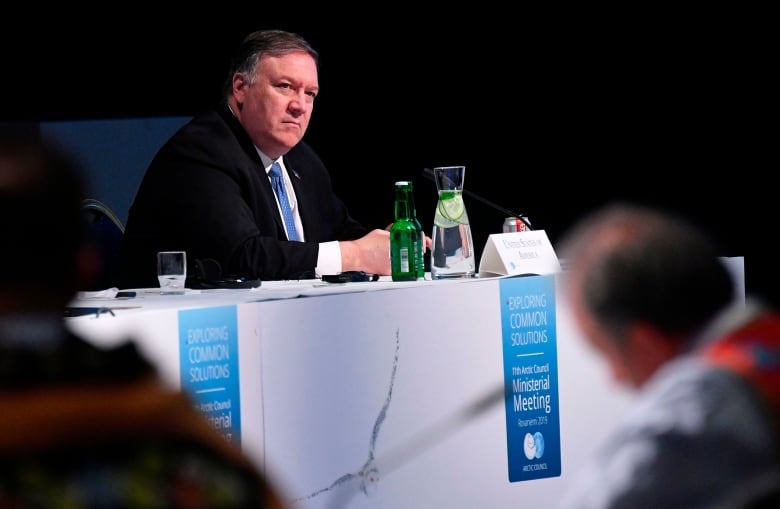 During this time as U.S. secretary of state, Mike Pompeo challenged Russian and Canadian territorial claims in the Arctic and dismissed China's push to be involved in Arctic policy-making. (Mandel Ngan/AFP/Getty Images)

But that may not be enough for a U.S. military concerned about Russian adventurism. Pressure could mount for expensive modernizations of NORAD and the North warning system, which Canada and the U.S. run jointly, "to ensure that we have eyes and ears on what's happening," she said.

"[Canada] in turn will also pivot to the Arctic," said Charron, emphasizing that the security concern is "not going to go away."

Trump's most lasting Arctic legacy might be four years of refusing to acknowledge climate change and a corresponding effort to roll back decades' worth of environmental protections in the Arctic.

In his first year in office, Trump withdrew the U.S. from the Paris climate agreement, which sets emissions targets for its signatories, in a move viewed as "antithetical to the general direction of ... many of the Arctic states," said Charron.

The Trump administration avoided acknowledging climate change or its impacts, including the rapid melting of Arctic sea ice, in any joint declarations, which caused an unprecedented rift at the Arctic Council in 2019. 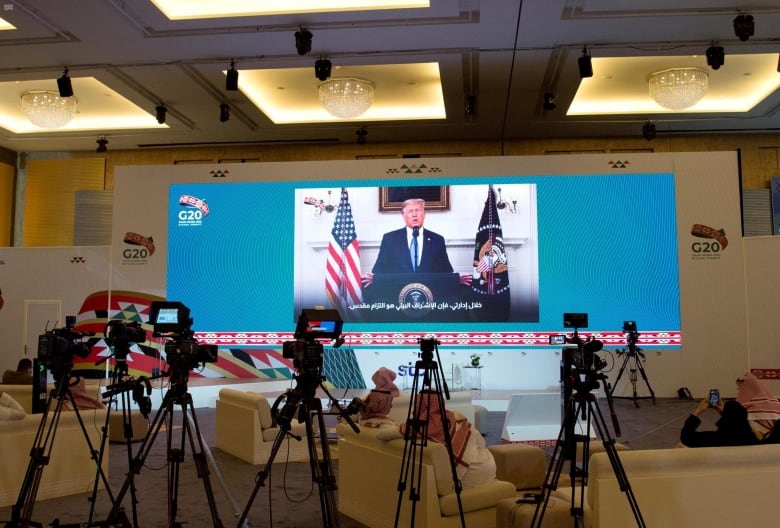 Trump speaks out against international climate accords at the G20 virtual summit in November 2020. Trump railed against climate agreements at every opportunity, causing a rift with fellow Arctic nations. (Saudi Press Agency/Handout/Reuters)

"The Arctic states could not agree on a joint declaration. I mean, that's unheard of," said Charron. "And that's because Trump, ideologically, will not use the term 'climate change.'"

More practically, Trump's administration oversaw a rapid gutting of environmental regulations, with the Brookings Institution tracking dozens rolled back under his presidency right up to last week.

In Alaska alone, those included efforts to increase logging in forests, reduce protections for endangered Arctic species and permit the use of dogs, bait and artificial light in hunting wolves and bears.

The fight over development in wildlife refuge

But Alaskan environmentalists' biggest battle with Trump has been over his push to open the Arctic National Wildlife Refuge to fossil fuel development.

The refuge is home to calving grounds of the threatened porcupine caribou herd, central to the Gwich'in people of northern Alaska and the Yukon.

"What we've seen over the past four years is an unrelenting push to open these calving grounds to oil and gas development," said Malkolm Boothroyd, the campaigns manager for the Yukon chapter of the Canadian Parks and Wilderness Society.

That has only accelerated in Trump's final months, as his administration has opened new swathes of land to development and rushed a sale of leases. 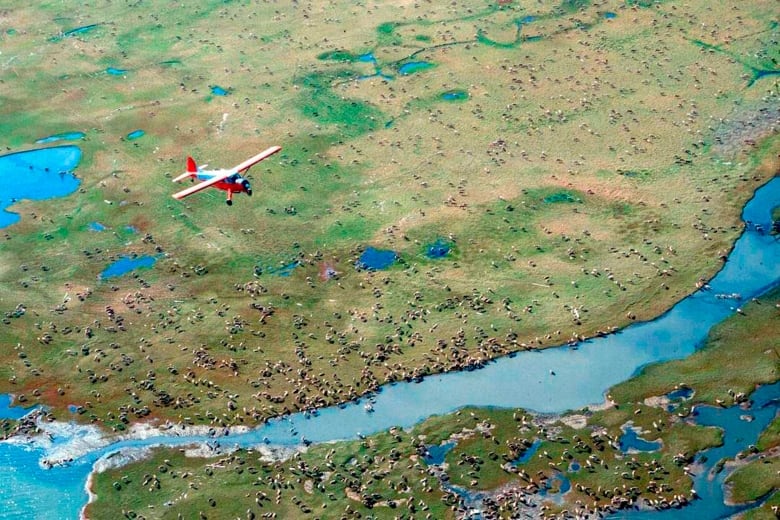 Huebert at the University of Calgary sees in this final rush an effort to "cripple" the incoming U.S. administration and paint the next president, Joe Biden, "as the bad guy" in the eyes of pro-development Alaskans.

In the area around the refuge, most residents vote Democrat but support responsible development, according to Donald Olson, the Democratic state senator representing Alaska's Arctic region.

"The view from the people that I represent … is that the quality of life has been significantly increased by the oil industry," said Olson.

But Olson said his constituents have been dismayed by Trump's approach, which involved little to no consultation with local residents.

Trump's push to open up the refuge to development has also made responsible development harder to defend. Public pressure from groups such as Boothroyd's have turned some major companies — and their lenders — off drilling in the refuge.

Some of these policies are already set to be undone by the Biden administration — he plans to rejoin the Paris agreement on his first day in office, ban Arctic offshore drilling and "re-establish climate change as a priority for the Arctic Council," according to campaign documents.

On defence, Biden doesn't reject the military's aggressive posture in the Arctic but has committed to also use international forums, such as the Arctic Council, to "hold Russia accountable for any efforts to further militarize the region," according to Biden's campaign platform. 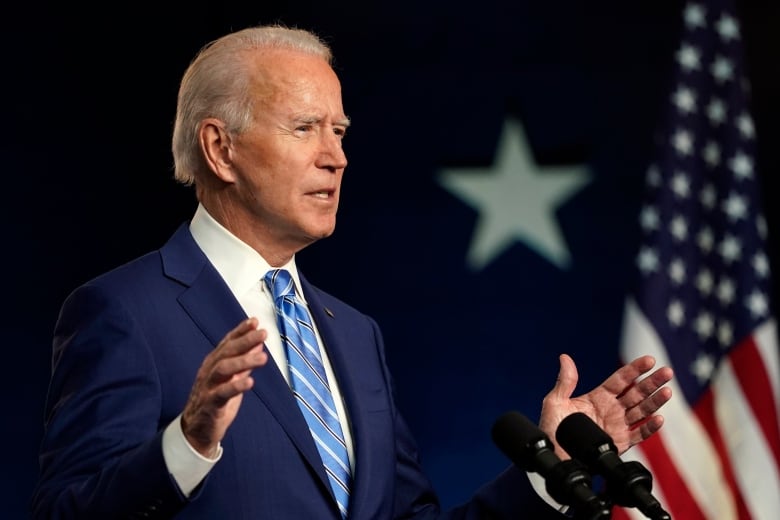 Incoming president Joe Biden has already signalled his plans to roll back some of the Trump administration's policies, including re-entering the Paris accord and banning offshore drilling in the Arctic. (Carolyn Kaster/Associated Press)

"Biden will probably make efforts to roll back some of the worst elements of the unilateralism that Trump introduced into the Arctic," said Huebert.

That could mean greater co-operation with Arctic Indigenous groups and a more considered approach to defence.

"I really hope that Biden confirms ... that the Arctic is a homeland — it's where people live," said Charron. "It's not just a big security chessboard."

Others are more cautious in their optimism. Boothroyd, the environmental campaigner, said Trump's four years in office left a mark in the Arctic that may be difficult to remove.

"There's still a lot of work to undo the damage that's been done."

9 At Least Five Killed In Senegal Protests Since Opposition...

10 The Queen Is Unlikely To Watch ‘Oprah With Meghan &...