Turkish forces pushed deeper into northeastern Syria on Friday, the third day of a cross-border offensive against Syrian Kurdish fighters that has set off another mass displacement of civilians and met with widespread criticism from the international community.

There were casualties on both sides and Turkey reported its first military fatality, saying a soldier was "martyred" in the fighting. The invasion came after U.S. President Donald Trump opened the way for it by pulling U.S. troops from their positions near the border and abandoning U.S.-allied Syrian Kurdish fighters.

NATO's secretary-general, meanwhile, urged Turkey to exercise restraint — though he acknowledged what he said is Turkey's legitimate security concern about the Syrian Kurdish fighters.

Jens Stoltenberg also expressed his worry that Turkey's offensive launched earlier this week may "jeopardize" gains made against ISIS in the war in Syria.

On Friday morning, plumes of black smoke billowed from the Syrian border town of Tel Abyad as Turkey continued bombarding the area. 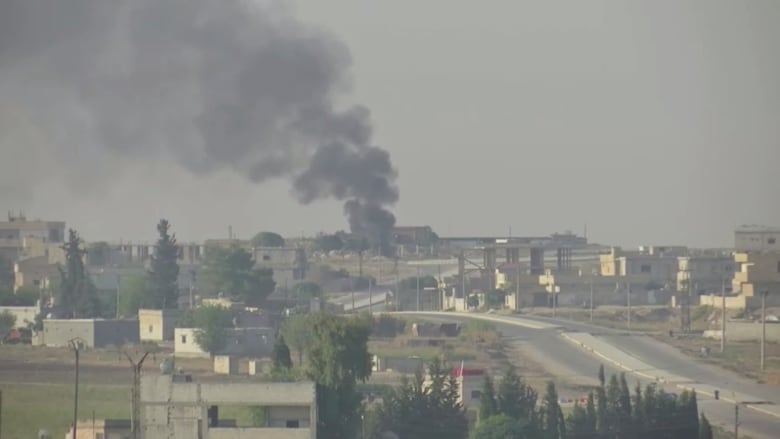 Plumes of black smoke billow from the Syrian border town of Tel Abyad as Turkey continues to bombard the area. (Reuters TV)

The Turkish ministry statement reported the death of a soldier also said three soldiers were wounded in the action but didn't provide details. Separately, the ministry said 49 more "terrorists" were "neutralized" in the incursion, in reference to Syrian Kurdish fighters. It said the total number of Kurdish fighters killed so far numbers 277. Those figures could not be independently verified.

Turkey considers the Syrian Kurdish fighters terrorists linked to a Kurdish insurgency within Turkey and says the offensive is necessary for national security.

In Syria, residents fled with their belongings loaded into cars, pickup trucks and motorcycle rickshaws, while others escaped on foot. The United Nations refugee agency said tens of thousands were on the move, and aid agencies warned that nearly a half-million people near the border were at risk — in scenes similar to those from a few years ago, when civilians fled the ISIS militants.

Turkish officials said the Kurdish militia has fired dozens of mortars into Turkish border towns the past two days, including Akcakale, killing at least six civilians, including a nine-month-old boy and three girls under 15. On the Syrian side, seven civilians and eight Kurdish fighters have been killed since the operation began, according to activists in Syria.

The Turkish Defence Ministry said the offensive was progressing "successfully as planned." A Kurdish-led group and Syrian activists said that despite the bombardment, Turkish troops had not made much progress on several fronts they had opened. But their claims could not be independently verified.

Turkish Foreign Minister Mevlut Cavusoglu has said the military intends to move 30 kilometres into northern Syria and that its operation will last until all "terrorists are neutralized."

Cavusoglu, speaking at a joint news conference with Stoltenberg on Friday in Istanbul, said Turkey expected solidarity from its allies. He added that "it is not enough to say you understand Turkey's legitimate concerns, we want to see this solidarity in a clear way."

Meanwhile, a French official said Friday that sanctions against Turkey will be "on the table" at next week's European Union summit.

Amelie de Montchalin, the French secretary for European affairs, told France Inter radio that Europe rejected any idea that it was powerless to respond to what she described as a shocking situation against civilians and Europe's Kurdish allies against ISIS. 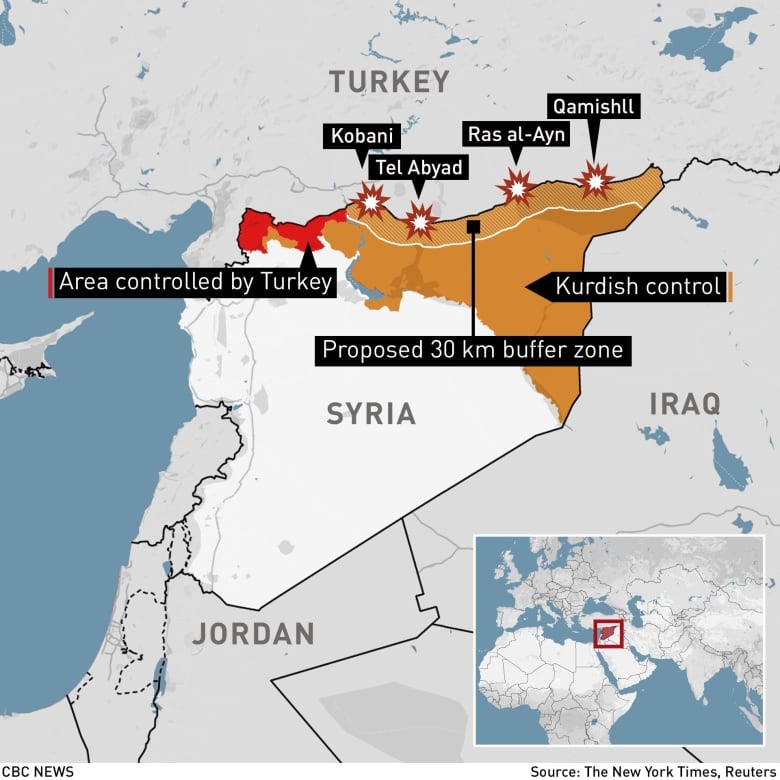 European diplomats in Brussels have responded cautiously to the idea of sanctions on Ankara though the invasion — which began Wednesday and was dubbed by Turkey "Operation Peace Spring" — has met with unanimous criticism.

The Turkish assault aims to create a corridor of control along the length of Turkey's border — a so-called "safe zone" — clearing out the Syrian Kurdish fighters. Such a zone would end the Kurds' autonomy in the area and put much of their population under Turkish control. Ankara wants to settle 2 million Syrian refugees, mainly Arabs, in the zone.

As the incursion drew widespread criticism, Turkish President Recep Tayyip Erdogan warned the European Union not to call Ankara's incursion into Syria an "invasion." He threatened, as he has in the past, to "open the gates" and let Syrian refugees flood into Europe.

9 17 People Not Afraid To Stand Up For BLM Alone

10 Here's How to Avoid Epic Career and Life Fails