U.S. President Donald Trump is on the verge of being impeached for a second time in an unprecedented House vote Wednesday, a week after he encouraged a mob of loyalists to "fight like hell" against election results just before they stormed the U.S. Capitol in a deadly siege.

While Trump's first impeachment in 2019 brought no Republican votes in the House, a small but significant number of leaders and lawmakers are breaking with the party to join Democrats, saying Trump violated his oath to protect and defend U.S. democracy.

The stunning collapse of Trump's final days in office, against alarming warnings of more violence ahead by his followers, leaves the nation at an uneasy and unfamiliar juncture before Democrat Joe Biden is inaugurated on Jan. 20.

"If inviting a mob to insurrection against your own government is not an impeachable event, then what is?" said Jamie Raskin, the Maryland Democrat who helped draft the article of impeachment.

Trump, who would become the only U.S. president twice impeached, faces a single charge of "incitement of insurrection."

Staging what will surely be one of his ‘last stands’ before a section of border wall in Texas, U.S. President Donald Trump praised his accomplishments while deriding Democratic efforts to impeach him for the second time even as members of Congress prepare for an impeachment vote. 3:02

The four-page impeachment resolution relies on Trump's own incendiary rhetoric and the falsehoods he spread about Biden's election victory, including at a White House rally on the day of the Jan. 6 attack on the Capitol, in building its case for high crimes and misdemeanours as demanded in the Constitution.

Trump took no responsibility for the riot, suggesting it was the drive to oust him, rather than his actions around the bloody riot, that was dividing the country.

A Capitol police officer died from injuries suffered in the riot, and police shot and killed a woman during the siege. Three other people died in what authorities said were medical emergencies. Lawmakers had to scramble for safety and hide as rioters took control of the Capitol and delayed by hours the last step in finalizing Biden's victory.

The outgoing president offered no condolences for those dead or injured, only saying, "I want no violence."

Some Republican support for impeachment

At least five Republican lawmakers, including third-ranking House leader Liz Cheney of Wyoming, were unswayed by the president's logic. The Republicans announced they would vote to impeach Trump, cleaving the Republican leadership and the party itself. 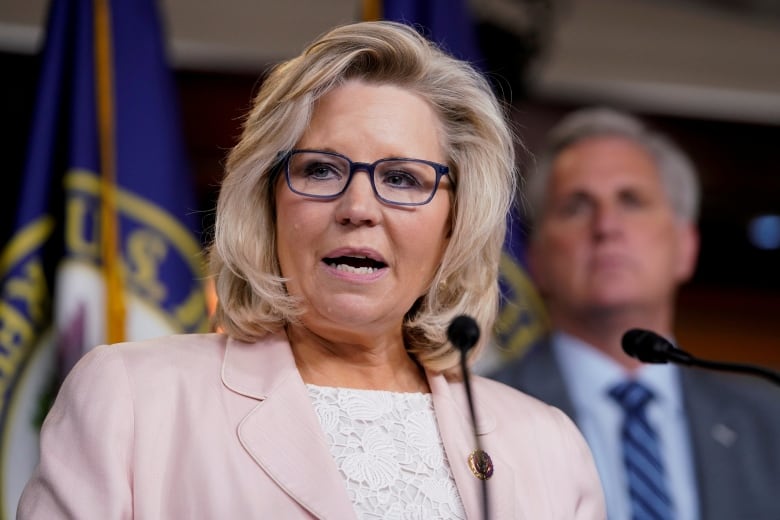 U.S. House Republican Rep. Liz Cheney, shown in 2019, said in a statement late Tuesday that Trump 'summoned' the mob that attacked the Capitol last week, 'assembled the mob and lit the flame of this attack.' (Aaron P. Bernstein/Reuters)

Senate Republican leader Mitch McConnell of Kentucky is said to be angry at Trump, and it's unclear how an impeachment trial would play out. In the House, Republican leader Kevin McCarthy of California, a top Trump ally, scrambled to suggest a lighter censure instead, but that option crumbled.

So far, Republican Reps. John Katko of New York, a former federal prosecutor; Adam Kinzinger of Illinois, an Air Force veteran; Fred Upton of Michigan; and Jaime Herrera Beutler of Washington state announced they, too, would join Cheney to vote to impeach.

The House tried first to push Vice-President Mike Pence and the Cabinet to intervene, passing a resolution Tuesday night calling on them to invoke the 25th Amendment to the Constitution to remove Trump from office.

The resolution urged Pence to "declare what is obvious to a horrified Nation: That the President is unable to successfully discharge the duties and powers of his office."

Pence made it clear he would not do so, saying in a letter to House Speaker Nancy Pelosi that it was "time to unite our country as we prepare to inaugurate President-elect Joe Biden."

With new security, lawmakers were required to pass through metal detectors to enter the House chamber, not far from where Capitol police, guns drawn, had barricaded the door against the rioters. Some Republican lawmakers complained about the screening.

The impeachment bill draws from Trump's own false statements about his election defeat to Biden. Judges across the country, including some nominated by Trump, have repeatedly dismissed cases challenging the election results, and former Attorney General William Barr, a Trump ally, has said there was no sign of widespread fraud.

Trump was impeached just over a year ago for abuse of power and obstruction of Congress for trying to strong-arm Ukraine's leader to help damage Biden politically.

Steve Martin Has Thoughts On Whether Planes, Trains And Automobiles Should Have An Oxford Comma

2 The Secret Life Of A Con Man: 'I Scam Innocent People For...

4 ‘Mank’ Cast On Transporting Into The Golden Age For David...

6 Boeing wants all its aircraft to fly on sustainable fuels...

9 Ghostbusters Afterlife: 7 Quick Things We Know About The...