Foreign Minister Dmytro Kuleba has ordered all of Kyiv's embassies abroad to "urgently" strengthen security, a Ukrainian ministry spokesperson has said, after a series of letter bombs were found in Spain.

Spain also has stepped up security at public and diplomatic buildings after a spate of letter bombs, including one sent to Prime Minister Pedro Sanchez and another to the Ukrainian Embassy in Madrid, where an official suffered minor injuries.

The Interior Ministry revealed on Thursday that an "envelope with pyrotechnic material" addressed to Sanchez had been received on Nov. 24 and disarmed by his security team.

The device was "similar" to packages subsequently received by the Ukrainian Embassy and a Spanish arms firm on Wednesday, it said, and a device intercepted at Spain's Torrejon de Ardoz air force base in the early hours of Thursday morning. 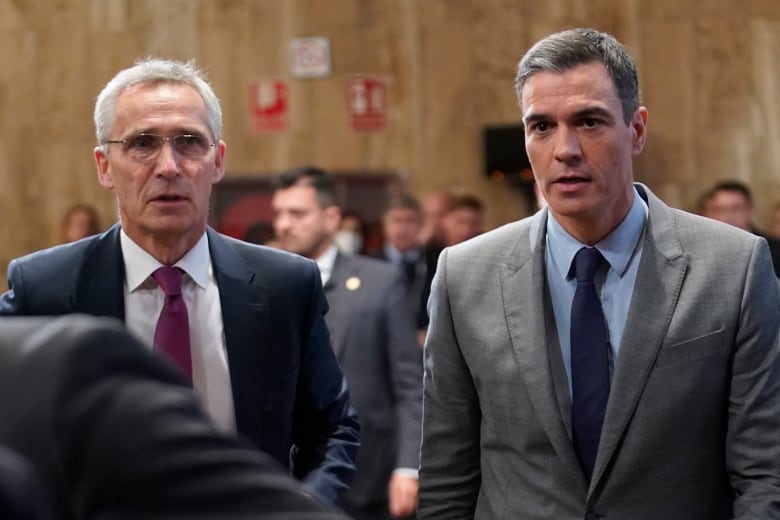 The headquarters of Spanish weapons manufacturer Instalaza in Zaragoza, in northeastern Spain, received one of the suspicious packages on Wednesday night, police said. Instalaza manufactures the C90 rocket launcher that Spain has supplied to Ukraine.

A source close to the investigation told Reuters that the devices sent to the prime minister's office, the Ukrainian Embassy, the air base and the arms manufacturer were in similar brown envelopes and addressed to the heads of each institution.

They contained loose gunpowder with an electrical ignition mechanism that would make the powder burn, rather than explode, the source said.

Spain's Correos postal service has been asked to collaborate in a pre-screening of all similar envelopes, the source said.

WATCH | NATO steps up Ukraine aid but still undecided on other requests:

Spain's High Court that specializes in terrorism has opened an investigation, a judicial source said.

The device sent to the Ukrainian Embassy was received around lunchtime on Wednesday and exploded when it was opened by a security official.

Ambassador Serhii Pohoreltsev told the Ukrainian news site European Pravda that the suspicious package addressed to him was handed to the embassy's Ukrainian commandant, who took it outside to open.

"After opening the box and hearing a click that followed, he tossed it and then heard the explosion.… Despite not holding the box at the time of the explosion, the commandant hurt his hands and received a concussion," Pohoreltsev was quoted as saying.

Spanish security forces also found a suspected explosive device early on Thursday hidden in an envelope mailed to a European Union satellite centre located at an air force base in Torrejon de Ardoz, outside Madrid, the Defence Ministry said.

After scanning the envelope by X-ray, air force security officers determined it contained "a mechanism," the ministry statement said.

The satellite centre supports the EU's common foreign and security policy by gathering information from space intelligence devices, according to its website. EU Foreign Policy chief Josep Borrell described such systems as "the eyes of Europe" in September. Hilaria Baldwin ‘started to scream’ when she...