The Royal Fascinator Hello royal watchers and those intrigued by what's going on inside the House of Windsor. This is your deep dive into royal news and analysis. Reading this online? Sign up here to get this delivered to your inbox.

Harry and Meghan have stepped back. Now what?

The breathless headlines over Prince Harry and Meghan's decision to step back as senior members of the Royal Family have subsided, but uncertainty remains about how their new life will work out for them.

Harry spoke Sunday night of the "many years" of challenges that preceded the decision, and about taking a step forward "into what I hope can be a more peaceful life."

Then he returned to Canada to be reunited with Meghan and their son, Archie, in British Columbia, where they had been staying over the holidays.

It's not clear how much of their time will be spent in Canada, but for at least one longtime observer, there is a sense that life on this side of the Atlantic may have its challenges, too.

"My fear is that Harry is going to be lost, with not enough to do, and thousands of miles away from his family and friends and everything he has ever known," said author Penny Junor, who delved into his life in her biography Prince Harry: Brother, Soldier, Son.

Speculation has been rampant regarding what the couple may do now that they have stepped back and seek financial independence.

While they won't be using their "Royal Highness" titles, they have kept their associations with their private patronages.

"That is where their hearts lie, and those charities would be devastated to lose them as patrons," Junor said via email. "Even without their titles, they will bring in funds and increase profile." 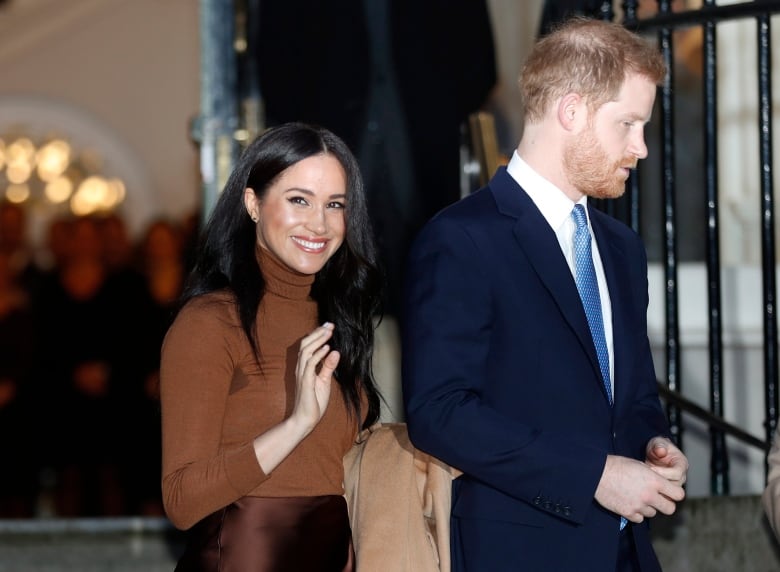 Lawyers for the Duke and Duchess of Sussex sent a letter to British new outlets accusing photographers of 'harassment' and claiming  that paparazzi have permanently camped outside the couple's Vancouver Island residence, attempting to photograph them at home using long-range lenses. (Frank Augstein/Associated Press)

But there is likely to be much scrutiny of how they try to develop their own brand.

"I'm sure the tabloid press will be keeping a close eye and leaping on anything that smacks of either of them exploiting their royal connections," Junor said.

Media and PR experts in the U.K. are already suggesting it could be an expensive and complicated battle if Harry and Meghan have to change the Sussex Royal brand that they have been promoting.

David Haigh, chief executive of a brand valuation consultancy, told The Guardian that they face the "mother-of-all punch-ups" protecting it in global markets. "The fact is, it's a minefield. They are going to have real problems," he told the paper.

Earlier this week, British media reports were also questioning whether a commercial venture by one of Harry's cousins might offer a look at how Harry and Meghan will chart their own path.

The Daily Mail reported that Princess Anne's son, Peter Phillips, who is not a working member of the Royal Family, endorsed milk from Jersey cows in a Chinese television ad.

What about those HRH titles? 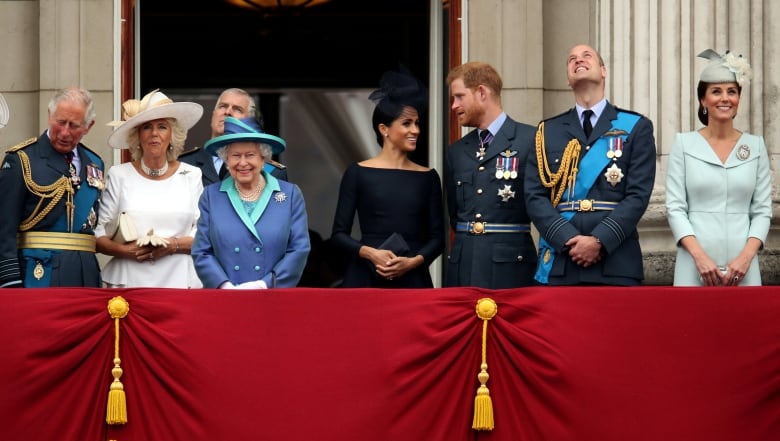 In this file photo, Britain's Prince Charles, Camilla, Duchess of Cornwall, Queen Elizabeth, Meghan, Duchess of Sussex, Prince Harry, Prince William, and Catherine, Duchess of Cambridge, stand on the balcony of Buckingham Palace as they watch a fly past to mark the centenary of the Royal Air Force in central London on July 10, 2018. (Chris Radburn/Reuters)

Following last Saturday's announcement of how Harry and Meghan would chart their new course, much attention has revolved around their "His/Her Royal Highness" titles and their significance.

"I think what is confusing to the public is the idea they still have these titles but they will not be using them," said Carolyn Harris, a Toronto-based royal author and historian.

It all sets up an unusual — but not unprecedented — scenario.

The Duchess of Kent, wife of the Queen's cousin, the Duke of Kent, stopped using her HRH a couple of decades ago.

"She pursued an independent career as a music teacher in a school and stepped away from royal duties," said Harris. 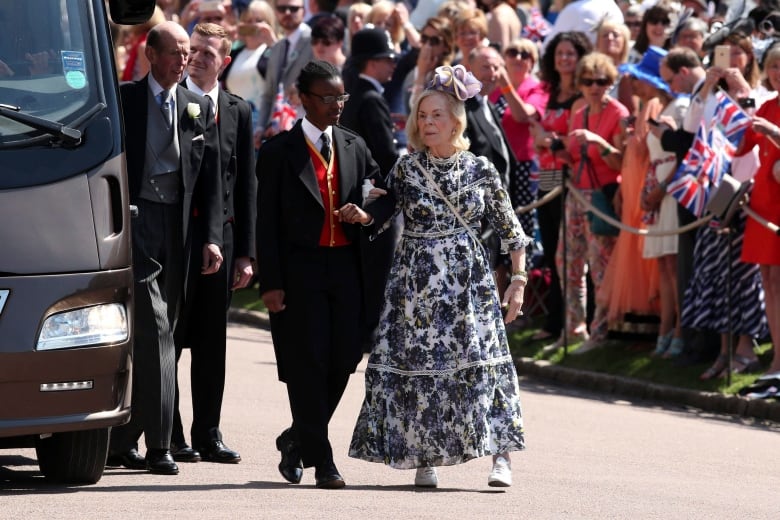 Under King George V's letters patent in 1917, the HRH titles were restricted to children and male-line grandchildren of the monarch.

"At [that] time, King George the Fifth was eager to distance himself from some of his German relations in the House of Hanover as well," said Harris, "so restricting royal titles was also a means of clearly defining who was in the Royal Family as opposed to who was more distantly related to the monarch."

If Harry and Meghan had been stripped of their HRH titles, Harris suspects it would have prompted a conversation at the palace over whether other members of the family should keep their titles.

"If Harry and Meghan formally lost their HRH, the question would arise of why does Prince Andrew have an HRH if he is not carrying out royal duties, as he's stepped back from his royal duties in disgrace."

Similar questions might arise for Andrew's daughters, Princesses Beatrice and Eugenie, who have the title but have never been full-time working members of the family.

Harris thinks that during the next reign, it's likely Prince Charles, as monarch, will issue new letters patent restricting the HRH to a much smaller number of people, perhaps the heir to the throne and their children, "in order to avoid these complications." 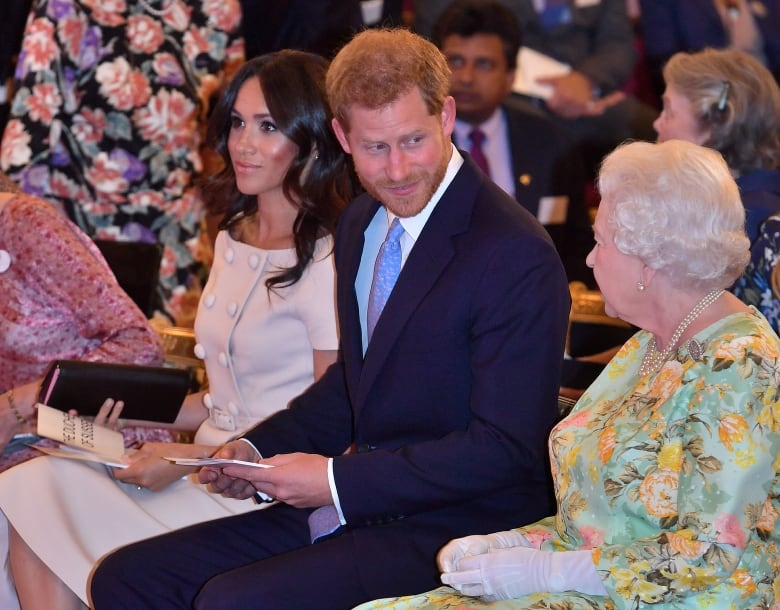 In this file photo, Britain's Queen Elizabeth, Prince Harry and Meghan, the Duchess of Sussex, pose for a picture with some of Queen's Young Leaders at a Buckingham Palace reception following the final Queen's Young Leaders Awards Ceremony in London on June 26, 2018. (John Stillwell/Pool via Reuters)

Harry's departure from the upper echelons of the Royal Family — and the fact that he will no longer formally represent Queen Elizabeth — could pose a constitutional conundrum for the United Kingdom.

Harry is a Counsellor of State, one of a select group of high-ranking royals who can carry out most of the official duties of the monarch if they are unable because of illness or absence abroad. In the event of that, two or more counsellors can be appointed.

According to law, the counsellors are the monarch's spouse and the next four adults in the line of succession who have reached the age of 21.

"Given that Prince Harry will no longer represent the Queen, Prince Andrew has stepped back from public life and Prince Philip has retired, only Prince Charles and Prince William are available," said Craig Prescott, director of Centre for Parliament and Public Law at the University of Winchester in southern England, via email.

"The risk is that their duties as Counsellors of State mean that Prince Charles and Prince William could not do the other things they are expected to do, such as representing the U.K. overseas or taking part in engagements around the U.K."

Commentator Katie Nicholl discusses the future of the British monarchy now that Prince Harry and Meghan Markle will no longer serve as working members of the Royal Family. 8:36

All this means that unless legislation (the Regency Acts 1937-1953) is amended, "the monarchy may not be able to meet all the expectations placed on it, which questions Prince Charles's idea of slimming down the monarchy," Prescott said.

Maybe it would be easier, Prescott suggested, "if the load was shared and those next in the line of succession, such as Princesses Beatrice and Eugenie, take up public duties and could become Counsellors of State, or other royals who still fulfil their duties, such as Prince Edward or Princess Anne, become Counsellors of State even though they are further down the line of succession."

Buckingham Palace did not respond to a request for comment this week.

Prescott said it had been rumoured last year that the palace approached Downing Street about changing the legislation.

"But apparently they were more concerned about changing the law on how and when a regency can be declared rather than looking at the issue of Counsellors of State. However, the two issues really should be considered together." 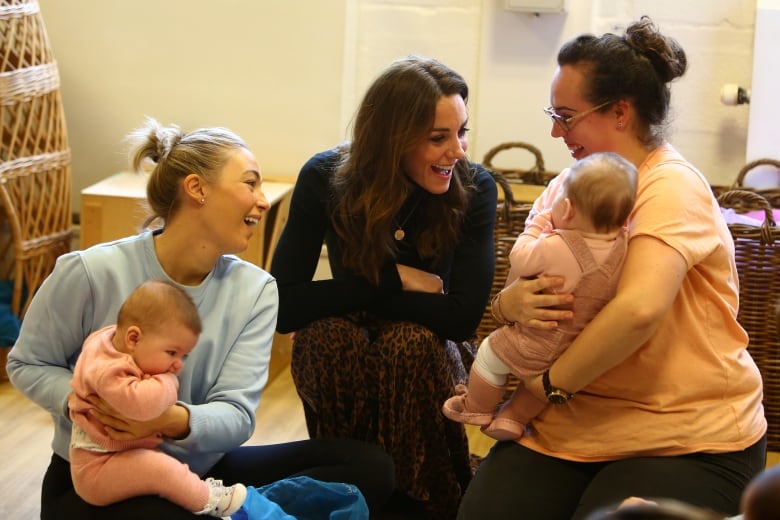 While Harry and Meghan have been the focus of public attention in the past two weeks, other members of the Royal Family have been out and about on engagements often focused on issues of significance to them.

Kate, the Duchess of Cambridge, launched a U.K.-wide survey that aims to improve early childhood, a major area of focus for her.

Prince Charles was at the World Economic Forum in Davos, where he spoke about the world needing a "paradigm shift" in how it deals with climate change, and met Greta Thunberg, the 17-year-old climate activist from Sweden.

Charles is also making his first official trip to Israel and the West Bank this week. 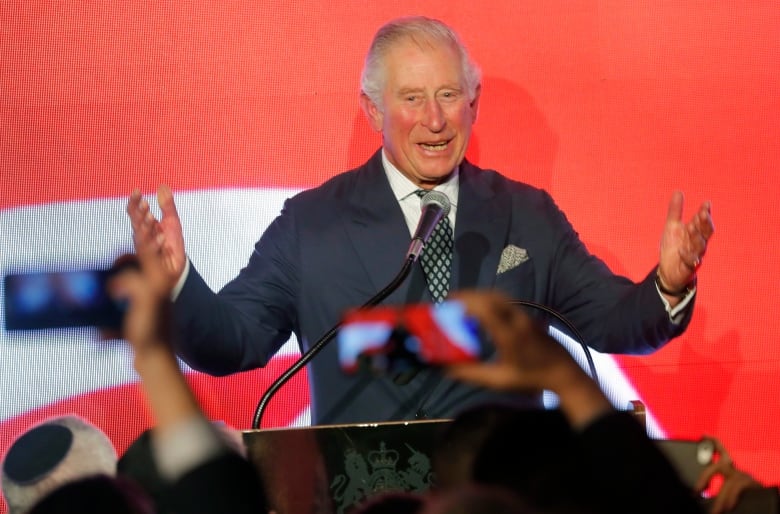 Britain's Prince Charles gestures during his speech as he attends a reception at Her Majesty's Ambassador's Residence in Tel Aviv, on Thursday. World leaders have denounced the rising threat of anti-Semitism and vowed never to forget the lessons of the Holocaust at a solemn ceremony marking the 75th anniversary of the liberation of the Auschwitz death camp. (Frank Augstein/The Associated Press)

"The lessons of the Holocaust are searingly relevant to this day. Seventy-five years after the liberation of Auschwitz-Birkenau, hatred and intolerance still lurk in the human heart, still tell new lies, adopt new disguises and still seek new victims."

—Prince Charles spoke Thursday in Jerusalem at the the World Holocaust Forum, which coincides with the 75th anniversary of the liberation of the Auschwitz death camp

Prince Harry's and Meghan's arrival in Canada could mean 'new grounds' for this country's privacy laws.

Prime Minister Justin Trudeau says he hasn't talked to Queen Elizabeth about security costs for Harry and Meghan in Canada.

Prince Harry may be looking for a job in Canada. Here are some options.

Why tracing the animal source of coronavirus...

Half-Life Alyx AMA: Everything we learned

How The March 2020 Love Horoscope Will Affect Your Zodiac Sign's Relationships All Month, According To Astrology

3 Stephen Colbert, Trevor Noah Get Religion On The...

4 This Furniture Created By A New Zealand Woodworker Looks...

8 Tyler Cameron Asks Fans to 'Pray' for His Mom After He...

10 Donald Trump Goes Off On Comcast At Cabinet Room Meeting:...