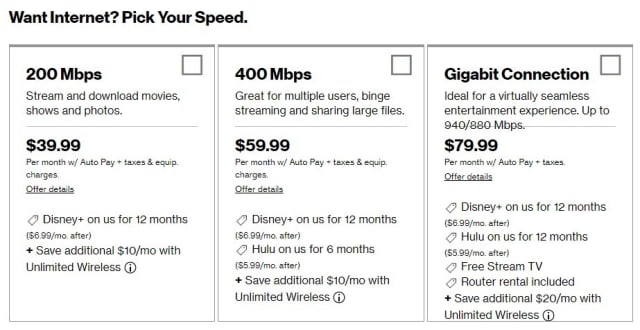 There are a couple of conditions to keep in mind. The first of which is that the included Hulu subscription gives you access to the platform's ad-supported tier, not its more expensive ad-free plan. Moreover, the base 200Mbps plan, which costs $40 per month, isn't included in the deal. However, it still comes with a free year of Disney+.

One other thing to note is that you'll need to cancel the included Disney+ and Hulu subscriptions if you don't want to pay for them beyond the time that you have access to them for free. Otherwise, they'll automatically renew, costing you $13 per month together. The promotion ends on September 23rd, after which it's possible to redeem the trials until December 23rd. Lastly, the deal is also available to returning customers.

Ubisoft CEO lays out a plan to change the...

‘Absentia’ Star Stana Katic Says Amazon Series Ending With Season 3: “I Couldn’t Think Of A Better Note To End On”

2 More than 100 injured as Palestinians and Israeli police...

6 Designers Are Creating Their Own Versions Of Famous Logos...

8 The Best Anthony Hopkins Movies And How To Watch Them