Home /
NEWSiNi /
WATCH: Trailer released for new horror movie from the producers of Us and Get Out

WATCH: Trailer released for new horror movie from the producers of Us and Get Out

If it's anything like the other two movies it's going to be an absolute hit.

Remember when $4.5 million budgeted thriller Get Out went on to make over $255 million worldwide, and bag both a Best Original Screenplay Oscar and a Best Picture Oscar nomination in the process?

And then Us came out a few years later and was also a resounding success, with Oscar-buzz surrounding Lupita Nyong'o's breathtaking (excuse the pun) performance?

Well, two movies with this level of success and reputation will naturally mean that whenever a movie from the same production company is released, people are going to be fairly excited.

Starring the brilliant Janelle Monáe, Antebellum is a creepy looking horror movie that we really don't know all that much about.

It seems to take place in two different time periods: the present day and the pre-American Civil War period, and plays host to a whole load of creepy horror movie imagery.

Naturally, there's a scary looking little girl who does the classic 'shh' motion, and that's enough to unsettle us.

And although it doesn't have extremely talented director Jordan Peele's name attached, it is produced by Lionsgate, the company behind both Get Out and Us.

Plus the trailer alone has us buzzing/terrified for the release.

And if that hasn't freaked you out yet, the movie's poster is suitably creepy too: 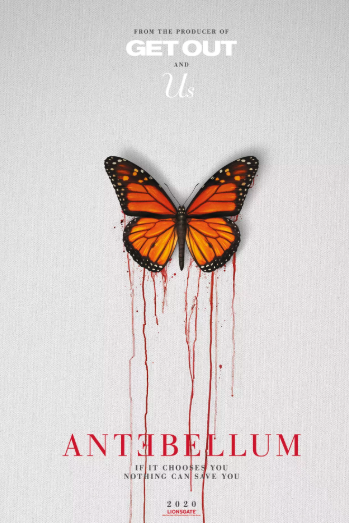