Home /
NEWSiNi /
What Does The Death Tarot Card Mean?

What Does The Death Tarot Card Mean?

Change happens when drawing this card, whether we want it to or not.

Tarot is an old-world card tradition dating back to the 15th century in Europe where the different pictures on cards are used for the purpose of fortune telling.

The deck of Tarot is made up of 78 cards, which are split into Major and Minor Arcanas, two different groupings of cards. These cards are used to help predict or even offer advice in the areas of love, relationships, career, family and health.

The Death Tarot card is the thirteenth card in the Major Arcana, and often comes up in readings when there is a major life change that is or will be in process.

RELATED: Which Tarot Card Are You, According To Numerology & Your Birthdate

Meaning of the Death Tarot Card

When working with Tarot, there are two ways that the card presents. The first is upright, meaning the energy is working with the challenge, or reversed, which signifies there is an avoidance or denial taking place.

The Death Tarot card, while sounding slightly scary, only really means that one chapter is ending so another can begin. In life, we need to be able to appreciate these transitions because they allow us to grow into better versions of ourselves. To let go means we’re also opening to receive.

While The Death Card doesn’t relate to an actual physical death, it does often signify unexpected and swift changes in our lives.

Many times, these situations can be so sudden, it creates a feeling of mourning that we have to process in order to see the positive on the other side.

For those who are going through a big life change — a divorce, move, new career or that feeling that we’re just outgrowing our previous lives — this is the card that will come up for you, and hopefully in the upright position.

When we get the Death Tarot card in the upright position, it means we’re ready to accept this new life phase and move through it; however if we get the reversed image, it means we’re likely trying to hold onto what was out of fear.

Even though it’s natural to have some hesitation when we’re encountering big life changes, resisting it means we’re going against the natural flow of life, and that always creates more challenges and difficulties for us.

The Death card in Tarot comes up to help us release what is no longer serving us and what we’ve outgrown so we can welcome in what will. 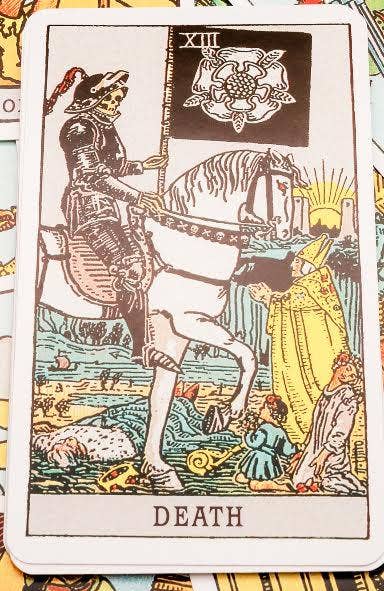 While there are so many interesting and artistic Tarot decks now available, traditionally, this card depicts a skeleton riding on a horse heading to the right.

It can look as if the horse is stepping over those that have died, but facing towards receiving a blessing from others. This signifies that whatever difficulty we’ve been through is over, and while the path may have been difficult, the situation is now about to become easier.

In animal symbolism, the horse represents victory and intelligence, signifying that the transition currently in progress is one that will bring greater success.

RELATED: What Tarot Readings Reveal About Who You Really Are

Drawing the Death card in an upright way means the picture is right side up, and is a positive and beneficial sign.

To pull an upright Death Tarot card means that whatever challenges or struggles you’re experiencing will end well for all those involved. It also likely means that if you’ve been in a difficult or confusing situation for some time, the end of that is in sight.

The most common meaning of the Death Tarot Card is that of spiritual transformation.

This means that one phase of our life is ending so another can begin. We can pull this card as we’re going through transitions in our romantic relationships, education, schooling, or even beginning to heal some of our emotional wounds from childhood.

When we see this card come up while in a big life transition, it can mean that we are being asked to release the past and all that came with it. This doesn’t mean to completely forget it, including the valuable lessons we learned; instead, it's to make the choice to no longer carry it with us.

While the Death Card can be unexpected and shocking ultimately, it’s about the beginning of a brand new chapter in our lives.

To receive the reverse of The Death Tarot card in a reading means the picture presents as upside down, which carries with it a completely different meaning — one that is far more difficult.

The reverse of any Tarot card will essentially be the harder path because we’re refusing to go with the natural order of the current energy. For the Death card, specifically, it means we’re resisting letting go of things or people from our pasts that are starting to negatively affect our present, and soon our future as well.

To receive the reverse of this card means we’re hanging on when we should be letting go.

But it’s also a reminder that nothing new can begin until we allow an ending. The one thing to remember with this meaning of the card is that it only signifies that we’re taking the harder road by resisting what is naturally trying to be, not that we’re able to change the situation.

Whatever The Death Tarot Card is touching in your life — whether it’s relationship-, career- or self-based — will ultimately happen, no matter how long we try to resist.

Not surprisingly, it’s the deep-water sign of Scorpio that rules the Death Tarot card because they are both the alchemists.

Alchemy is the transformation through a seemingly magical process. End even though both Scorpio and Death tend to carry darker energies, there is still an air of mysticism about them.

While their symbols are different, the meaning behind both of these signs is transformation through truth.

Even though the life endings and beginnings these two symbolize can be unexpected and challenging, they both are ultimately for our benefit, so we cannot only align to our truth but so we can live it.

Usually, when we’re doing a reading and this card comes up, many of us jump to the worst-case scenario, thinking a breakup is imminent. But that isn’t always the case.

We have to remember that this card is all about transformation.

The Death card is all about letting go of one phase of our lives so another can begin.

Yes, it can be scary to draw this card in a reading specifically about love and relationships, but really, it’s exciting because it ultimately means great things are on the horizon.

While this card often signifies a transition of sorts, it can also help bring awareness to that relationship that has been trying to end for some time, but we haven’t let it. This will be more apt to come up if the card is in the reverse, but to that degree, if we do get it, we have to take a closer look at the truth of our relationship.

Asking ourselves uncomfortable questions — Are we truly happy? Does this relationship actually fulfill my needs? Is it healthy? Am I pretending that this relationship is more than it really is? — can allow us to get a better sense of our truth, which will prevent us from resisting this card’s energy and receive it in the move from being in reverse to upright.

Overall, this the Death Tarot card signifies that things are going to change whether we want them to or not. Hopefully, it allows us to accept what is so we don’t waste valuable energy trying to resist the inevitable.

RELATED: The Right Questions To Ask The Tarot (For An Accurate Card Reading)

Let's make this a regular thing!

Kate Rose is an artist, writer, passionate yogi, spiritual astrologist, relationship and life coach, and motivational speaker. As a spiritual intuitive, she practices the religion of astrology and love. For more of her work, visit her website.

Brandi Glanville reveals all the details of...

9 Surprising Foods You Can Pickle