Home /
NEWSiNi /
What Makes A YouTube Video Hit The Trending Tab? This Data Scientist Broke Down Every Single Video That Trended In 2019.

What Makes A YouTube Video Hit The Trending Tab? This Data Scientist Broke Down Every Single Video That Trended In 2019.

Ah, the Trending tab. YouTube’s showcase of “videos that a wide range of viewers would find interesting.” Like many other facets of the platform’s content recommendation algorithm, the Trending tab has been a frequent target of suspicion from creators who want to know more about its inner workings–notably how and why it surfaces some seemingly popular videos, but not others.

We’ll likely never get a true peek under the hood from YouTube itself. But thanks to data scientist Ammar Alyousfi, we now have a massive amount of data about every single video that hit the tab in 2019, as well as corresponding conclusions about what qualities these videos tend to share.

To compile his report, Alyousfi ran an automated script that scraped data from YouTube’s Trending tab every day throughout the year. According to YouTube, “Trending isn’t personalized and displays the same list of trending videos in each country to all users” — so he didn’t have to account for the possibility that different videos might show up for users in different regions.

Alyousfi found that over the course of 2019, YouTube’s Trending tab displayed 11,177 unique videos. If that sounds smaller than expected, it’s because Trending actually displayed 72,994 total entries, or around 200 videos per day, but a number of those videos trended for multiple days. For the purpose of his report, Alyousfi chose to examine data “on all of the 72,994 trending videos, not on unique trending videos only,” he said. “The reasoning behind this is that we are interested in videos considered trending by YouTube. So if a video is considered trending for 3 days, then we believe it has more trending power and more trending characteristics than a video trending for 1 day only; thus, it should have more weight. So we include the 3 occurrences of that video in the analysis.”

So, which videos had the most “trending power”? In 2019, six videos appeared on the Trending tab for a staggering 30 days: 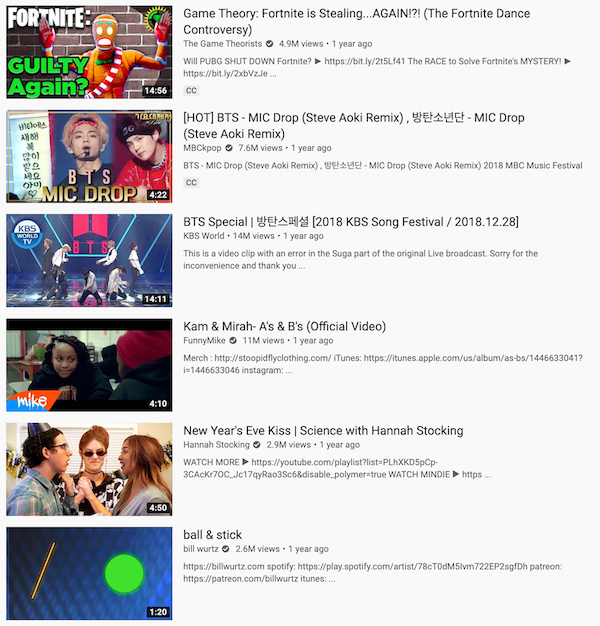 Perhaps unsurprisingly, three of them are music videos, and two are related to mega-popular kpop band BTS–which was also behind YouTube’s most-watched Trending video of 2019. The music video for “Boy With Luv,” its Halsey collaboration, had 195,376,667 views when it first appeared on the tab April 23, Alyousfi found. (For scale, he found 90% of videos hit Trending for the first time when they had less than 2,752,317 views. The smallest number of views a Trending video had when it entered was 53,796, and the average view count was 1,387,466.)

None of the longest-trending videos came from YouTube channels that most frequently produced trending content. Alyousfi’s data showed that, globally, the top Trending channel of 2019 was Canadian YouTuber Linus Sebastian’s Linus Tech Tips (11 million subscribers, 120 million views per month), which had a whopping 365 uploads appear on the tab. His channel was closely followed by cooking-focused Binging with Babish (7.3 million, 70 million), which produced around 360 Trending videos.

Here are all 19 top Trending channels: 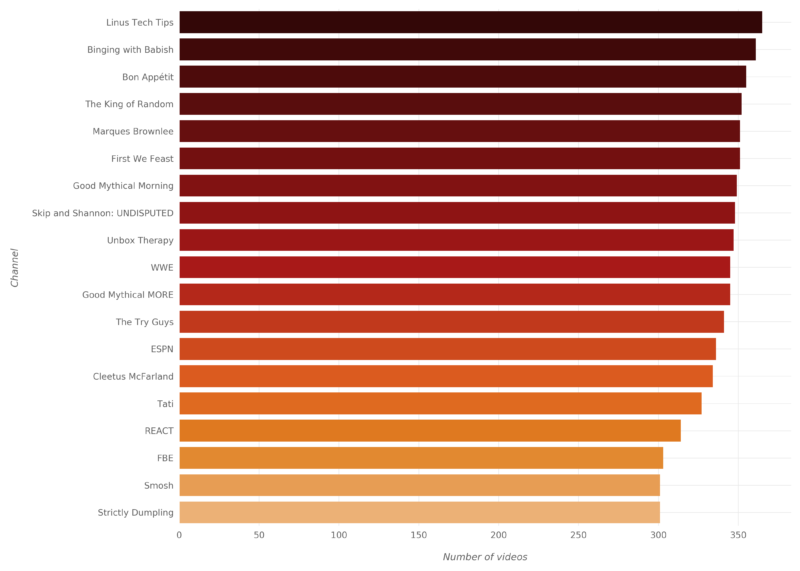 What makes a video trend?

Creators have long wondered whether uploading on specific days or at specific times, using all caps in their titles, or having lengthy/link-riddled descriptions affects the reach of their content. Alyousfi broke down these and a few more hypotheses to find out if any, well, trends show up amongst videos that appeared on the tab.

He found that Trending uploads were spread pretty evenly across days of the week. Tuesday, with 11,986 trending videos, was the highest posting day, while Saturday (7,345) lagged noticeably behind all other days. As for time of day, he found that videos uploaded between noon and 2 p.m. Eastern were the most likely to hit Trending, while videos uploaded between 6 a.m. and 11 a.m. Eastern were the least.

With that in mind, though, it’s worth noting that the majority of videos did not appear on Trending on the actual day they were published. “On average, a video appears on the trending list after 5.6 days of publishing,” Alyousfi wrote. “Also, 95% of the videos took less than 13 days to appear.”

His data showed several additional trends among video titles, including: a full 50% of Trending videos had no all-caps words in their titles; titles were generally between 36 and 64 characters in length; and the most common words used in Trending titles were “official,” “video,” “2019,” “vs,” “trailer,” “music,” “game,” “new,” “highlights,” “first,” and “challenge.” (Also, the fire emoji was the most commonly used on Trending videos.)

One of the last findings Alyousfi discusses is video tags. He says “almost all” Trending videos used tags, and the average number used per video is 21. But, he notes, YouTube tells creators that, “Tags can be useful if content in your video is commonly misspelled. Otherwise, tags play a minimal role in helping viewers find your video.”

“But if that was true, why would YouTube add a lot of tags to their videos?” he asks, pointing out that YouTube’s 2019 Rewind video had 39 tags. He didn’t reach any concrete conclusions about whether tags affect video surfacing, but said that just 3.5% of Trending videos had no tags.

You can see his full report here.